The Challenge of 'Too' Parenting 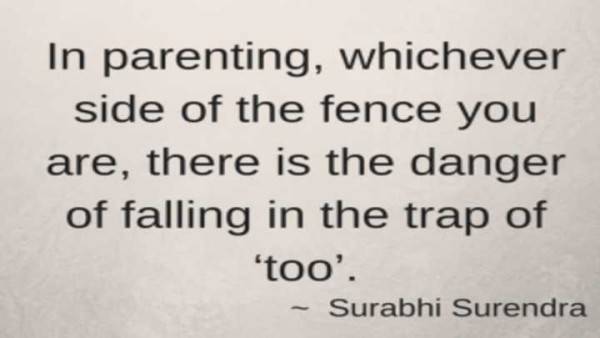 ‘Let us get ready for the khoi bag!’ announced the host of the Barbie themed birthday party.

(Khoi bag is a newly adopted birthday party game in India, in which one person stands on an elevated platform (like a chair) and empties the bag of goodies in a random order).

All the kids, roughly in the same age group, rushed to the spot where the khoi bag was to be unloaded. A young man stood up on a chair and began emptying the bag. The kids gathered around him holding their little pink poly bags open in their hands, as if they were baby birds with their beaks wide open waiting to be fed!

The whole scene looked like this - little ducks quacking in a group with their beaks open towards the sky, trying to catch the falling rain drops. Just that in a natural setting, the drops of rain fall uniformly all over; while in this birthday set up, the bag’s contents were not uniformly distributed. They were concentrated near the man who was up on the chair leaving the kids farther from him thirsty and wanting for more.

My petite daughter, Pahal, didn’t manage to find her footing in his proximity, even though she wasn’t the youngest in the group.

She isn’t aggressive or fast. She is calm and steady.

As expected, she couldn’t get a single item in her bag. Her bag was empty. In the meantime, the other kids knelt down to pick up things scattered around - toffees, chocolates, pens, pencils and the like.

An hour earlier, prior to arriving at the venue, I had explained to her the ridiculous practice of khoi bag, and how it simply made things worse by adding commotion to a party. I also explained to her that picking things up from the ground was not only unhygienic and beggar-like, but it also inculcated greed and competition in little kids.

As expected, Pahal understood and agreed.

‘Okay mumma, I won’t collect things that have fallen on the ground but can I stand and get things in my bag?’ she innocuously asked.

‘Yeah, that is fine with me’, I assured her.

And now, here she was. In tears. Feeling defeated and out of league because she couldn’t get a single thing, and her only chance of grabbing an item was lost because she wasn’t permitted to pick anything up from the ground.

‘Everyone is picking up. Why don’t you let me pick up this toffee? It is right here’, she cried pointing towards a toffee that lay next to her feet.

‘It is just a toffee, and I will give you many at home’, I tried to console her as I watched another kid pick it up.

That annoyed Pahal enough to accuse me of being ‘too lecturing’ by nature.

‘You are always lecturing me about things. Nobody else says anything to their kids. Only you do’, she sobbed.

I comforted her by reminding her of the lovely pink colored Barbie set that we had won just five minutes earlier in a copy-the-actions game!

She calmed down after a while but my mind became restless.

This made me realize that what was a mere toffee to me was a trophy for Pahal. Otherwise, why would a child cry for something that she distastes?

‘Am I really too restraining as a mom?’ I wondered.

Having spent the crucial first four years of her life in a secluded but beautiful island, she is calmer and more sensitive than her peers.

Or perhaps, I should hold myself accountable for her docile personality. I always encouraged my daughter to be polite and humble; to be peaceful and obedient. It worked perfectly well until we moved to the country’s capital -, a fast paced urban metropolis.

The same humbleness and obedience is now seen as timidity and diffidence.

Pahal takes at least an hour to open up in a party, even if the party is full of people she is familiar with. That is just how she is. Maybe she has inherited this coyness from her shy daddy!

And maybe the absence of a TV set in our house adds to her non-pushy nature.

I am a mom who lets her child deal with most of her problems - physical and emotional. My instant reaction to any kind of physical pain reported by Pahal is - ‘It’s alright. Do not worry’.

I rarely pressurize her to behave in a certain way at social gatherings even though I feel strongly inclined to coerce her to participate.

But when she called me too lecturing by nature, I received a stern set-back.

A simple statement from her, when she was in emotional distress because of a constraint her dear mommy had imposed on her tender mind, forced me to take a step back and look at things from a new perspective.

For a moment I felt I was being too harsh on a soft girl.

My husband is at the other end of the fence. An invisible minuscule cut on his daughter’s finger and he wraps a band-aid around it. Going on a short trip? He fills the vehicle with chips, cold drinks and biscuits. In other words, I think he pampers her too much.

Whichever side of the fence you are, there is the danger of falling in the trap of ‘too’.

When I let Pahal take her own time to open up to strangers, and when I let her cling to me in gatherings, I am accused of being too defensive of her. ‘You should let her go out on her own’, I am advised.

When I push her to join the other kids even though she is reluctant, I am charged with being too overbearing.

I ask Pahal not to accept gifts from people other than close family members and my friends say ‘You are being too mean to this young girl. Kids love gifts. Let her take one.’

I once let a stranger hug her, and when it turned out that he was drunk, I hated myself for being too irresponsible.

The day I left Pahal in the kids’ corner of the park and deliberately moved away to let her be on her own for sometime, she began crying and I was criticized for being too careless a mother.

Am I being insensitive to my daughter’s needs and desires? I don’t know.

What I know for sure is that my biggest challenge in parenting is that of ‘too’ parenting.

Where do I draw that line between being too protective and too carefree?

How do I find out when requesting becomes restraining?

When do I realize that normal parenting is being ‘too’ parenting?

It is hard to obtain answers to such evasive questions that aren’t new.

During my childhood in the 80s, kids were brought up very differently. We were three of us and it was way easier for us to share our problems and emotions. Our parents were busy in making ends meet and we were very independent.

My siblings and I spent the majority of our afternoons hanging around the trees, rolling in the mud and screaming from the rooftops. We mostly played in our makeshift tents on the terrace or in the streets with our bats and balls.

This seemingly perfect parenting was also flawed. I think my parents focused too much on materialistic success like grades and awards. They didn’t let us explore the fun aspects of life like going out late nights, experimenting with clothes, or even being a tiny-bit unconventional.

To them, normal parenting meant ‘norms-abiding’ parenting. Their style was too rigid at places.

This brings me to the final and the most important question of parenting - is there a perfect parenting style?

In the last few months, I have learnt to go a little easy. I do not judge myself for everything that I do or say to her. Nor do I over-analyze her statements. I have learnt that the true joy of motherhood lies in embracing its imperfections and absurdities, and being spontaneous.

As for perfect parenting? Let’s toss that term out.

Because love is a greater noun than right.

Because parenting is more instinctual than intellectual.

Surabhi Surendra is an MBA who took up blogging to follow her interest in writing. She also quit her Business Analyst job in an MNC to settle down with her family in the remote islands of Andamans.

I'm A Great Mom, I Just Yell A Little
I Shot Up My Children's Phones...and I'd Do It Again
When ‘they’ try to steal your child’s sparkle
advertisement

I'm A Great Mom, I Just Yell A Little
I Shot Up My Children's Phones...and I'd Do It Again
When ‘they’ try to steal your child’s sparkle