Tales Of A Fifth Grade Nothing

While on a recent trip to the beach, I observed my daughter happily playing with her best friend. They spent an entire day building sand castles, jumping waves and doing all the things you do with your bestie when you are nine years old. They told secrets, they giggled, they wore their bathing suits without worrying about cellulite.

As I watched them, I wondered how much longer it would be until either of them had to deal with a Mean Girl. Obviously, my daughter has had days where she’s come home because someone has hurt her feelings but we are still in that sweet spot where she mostly gets along with all the little ladies in the Third Grade.

I wondered how long it would be until she met her version of Danielle.

Danielle was the girl who made my life miserable in Fifth Grade. I’ve taken a page out of my friend Steph’s recent post on her blog, When Crazy Meets Exhaustion, and “disguised” my tormentor’s name but, frankly, thirty years later, I’m not super interested in protecting Danielle’s feelings.

Because Danielle stomped all over mine. And I’m still bitter.

When I was ten, I had just moved to a new school and was trying very hard to make new friends. If I can be frank, that’s NOT easy task when you have glasses, braces, a bad case of acne and your Yankee parents have recently moved you to the heart of The Lone Star State. Wearing headgear at sleepovers does not scream “I’m the cool girl”, trust me, so the first few months were brutal in my new school. And, moving to a part of the country where the Holy Trinity of football, cheerleading and designer labels reigned supreme was more culture shock than my ten year old self could handle. I didn’t have the right clothes, my accent was wrong and no one wanted to hear that my family rooted for the Patriots.

But, a few months after settling into my classroom, Danielle befriended me and I was grateful.

Danielle became a fixture in our home in those first few months. She and I would hang out in my bedroom, reading Teen Beat magazines and listening to Debbie Gibson. We’d drool over our shared love of Kirk Cameron and we’d have long discussions about which New Kid On The Block was cutest (Jonathan, duh. That’s the only correct answer here). We’d giggle, tell secrets and we’d go to the community pool together, nary a worry about cellulite on our minds. We wore jelly bracelets, coordinated our popped collar neon outfits and I talked to her for hours on the hot pink Princess phone my parents had installed in my bedroom (a phone in my room more than made up for the headgear on the Cool Scale).

Danielle was my Fifth Grade bestie.

Or so I thought.

I walked into school one morning to find that the entire classroom was buzzing about Danielle’s Big Slumber Party Bash. Danielle’s party was going to be the social event of the year. She was inviting all the girls in the class for a fun night of sleeping bags, snacks and, gasp, movies on her parents’ brand new VCR. Danielle was proudly handing out invitations as little girls clambered for her attention. I couldn’t wait to get mine. A VCR! So fancy!

As I sidled up to Danielle, expectantly waiting for my invite, she looked me over and smirked. I realize now that she was relishing in the painful blow she was about to deliver. She slowly and very deliberately turned her head away from me and announced to the group that I was, in fact, invited, but only because her mother MADE her invite me. She told all of those ten year olds that she begged her mother to let her exclude me but that she just couldn’t get around having me attend.

And then she told the girls, “But don’t worry, we’ll have fun even if SHE’S there….”. And the little snot minions all laughed together conspiratorially.

I was crushed. Devastated. I slowly turned my acned face down and silently begged the hot tears stinging at the corners of my eyes to stay put until I could procure the bathroom pass from my teacher.

I managed to make it through the day but when I got home, those tears fell and they didn’t stop. I cried into my mother’s arms and wailed at the injustice of it all. I had gotten my first dose of Mean Girl Treatment and my heart was broken.

My mother, on the other hand, was angry. It was like watching Bruce Banner morph into The Incredible Hulk: her fury boiled over and though she didn’t turn into a hulking, green super hero, her eyes took on a wild look and when she told me to get into the car RIGHT NOW, I knew better than to resist. After stopping to pick out a present for Danielle, she drove me right over to my tormentor’s house and marched me up to the front door. When Danielle answered the door with her bewildered mother behind her, my mother explained in very measured tones that I was unable to attend Danielle’s bash and we just wanted to drop off a present. When Danielle’s mother asked why I couldn’t attend, my mother said the words that still ring in my ears like a battle cry: “She can’t stay because she has better things to do than play with your daughter”. She then spun on her heels, clomped her Candies sandals down the sidewalk to the car and drove me home like a bat out of hell.

It was the greatest thing my mother has ever done for me.

And so, thirty years later, as I watch my daughter play with her friends and listen closely for signs that she’s met her Danielle, I know that I am ready to go to battle for her when the time comes because I learned from the best superhero on the planet. I know that I will channel my inner Bruce Banner and show her that Mean Girls don’t win. Ever.

I just wish I looked more like Wonder Woman…. 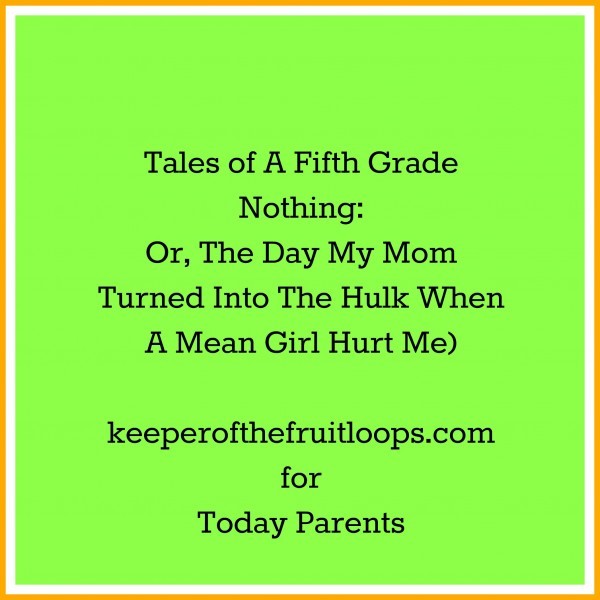 Don’t You Write A Blog About This Stuff?
A mom's worst nightmare: What if I raised a bully?
New Year, New Gear: Moving to Airplane Mode?
advertisement

Don’t You Write A Blog About This Stuff?
A mom's worst nightmare: What if I raised a bully?
New Year, New Gear: Moving to Airplane Mode?