We are en route to visit my family in California. A mother and her infant sit a row ahead and across from me. As she takes out a bottle and a burp cloth, I smugly take out my notebook and pen and prepare, from my place above the Plains, to write something rich for my final essay of the year.

However, as I put pen to paper, commotion comes from across the way. Not from row 8 with the well-behaved infant, but from the one behind it, seats 9A and 9B, the row with my 14-year-old girls.

The mother of the infant looks back with judgment as the daughter in 9A swears at her computer because, I soon gather, her movie didn’t download and now she has nothing to do but—dare I say it—read. In addition, I learn when I lean over, the Afrin isn’t working for the daughter in 9B, who has a cold. To help with the stuffiness, 9B is chewing gum and the chewing is driving 9A, already distraught due to the download failure and, the real issue, the fear that she failed to make the school musical, bonkers. In all my planning, I realize, I overlooked the reality that in addition to the notebook and computers, we also took ourselves.

9B blows her nose and announces that while her movie is functioning, her earphones hurt her clogged ears too much to listen.

I say, “I think so,” to appease my daughter as much as the horrified mother in 8B. I feel like explaining to her that we are not concerned with 9A’s actual survival, she simply auditioned for the school musical earlier in the week and will, upon landing, find out whether or not she made it. For several reasons, the odds are stacked against her and so in my daughter’s adolescent, all-or-nothing view of life—a view which her sleeping baby will have someday—9A’s future hangs in the balance as we fly. But of course, I say nothing. Instead, I long for my husband’s window seat as I hold my breath and hope that we survive everything from the flight to the musical to the rest of our lives.

As it seems I’ve been doing all year. I lived the past year like we now are flying, minute by minute, holding my breath. I‘m not only referring to the real kind of breath holding that comes with, say, waiting for biopsy results, but the maternal kind of breath holding, the kind that comes from shuttling folks through the angst of adolescence. The year was characterized by crises that mandated my repetition of the line, “In 2 weeks, will you remember this?” A bad grade. A bad pimple. A bad exchange with a friend. And currently, a bad audition. But though it’s been minute by minute, two weeks at a time, 52 weeks have suddenly passed, and I, suspended in air, stare at the baby in 8B and wonder when it was that the ones in 9A and 9B grew up. I’m sure I’m not the first to say that time with teenagers is no different than time with infants; the years pass quickly though the minutes drag on.

And on. We have an hour and 45 of them left in this flight. 9A is saying something again about the musical but the good news is that my ears are now clogged. I can’t hear, so I do what I rarely do, I shrug my shoulders and turn away, which is, I suppose, the strategy I should always use. I should parent like my kids’ iPhones are now set, on airplane mode, instead of reacting, even if only internally, to every issue that rolls in. I don’t need to be high in the sky to see the big picture. I’m well aware that the school musical crisis is only a matter of the moment. Just as I know that as 2015 rolls into ’16 and 14-years-old turns to 15, the conveyor belt of crises is only going to move faster and the shelf-life of my daughters’ issues will extend. I see what’s coming down the pike. I have a girlfriend whose daughter is dealing with high school finals and heartbreak. I have a mother whose daughter (me) dealt with breast cancer. So do yourself a favor, I want to tell the mother in 8B, train yourself now to take it down a notch. Put yourself on airplane mode, you’ll extend the life of your battery.

Previous generations of parents tuned out all of the time. When my mother, back in 1950, told her mother that she had no clean underwear for school, her mother told her that she didn’t need any because it was warm outside, then she went back to sleep. When, back in 1976, I cried at my birthday party because I wasn’t happy with my gifts (in fairness, I received about six or seven of the same very girly tube-tops), my mother sent me to my room and continued the party without me. Yet, we grew up fine. Well, maybe not fine, but good enough.

And guess what? Good enough might just be the new gold standard. In his article, “The Good Enough Parent is the Best Parent,” published on December 22, 2015 in Psychology Today, Psychiatrist Peter Gray, says good enough should be the goal. His basic message to parents is chill out. Even if you mess up, even if your children struggle, all will be okay.

So, for the new year, I resolve to get on trend and adjust my settings.

Though I see already that it’ll be hard to teach an old(er) mom new tricks. With 30 minutes left in our flight, with 9B still obsessing about the musical and 9A still complaining about her ear, the mom in 9C does what no good enough parent would ever do, she hands the paper and pen with which she planned to write her essay to her kids and tells them to, “Do something productive.” Surprisingly, they listen. They use the paper to make a list of the things they want to do on vacation, which they hang in my parents’ kitchen. As the days go by, my girls cross off goals as they accomplish them. Including 9B’s goal to make the musical. She’s part of the ensemble, it turns out. She’s doesn’t have lines but she gets to dance. She is happy. “It’s good enough,” she tells me.

I tell her that good enough is, in fact, the goal. 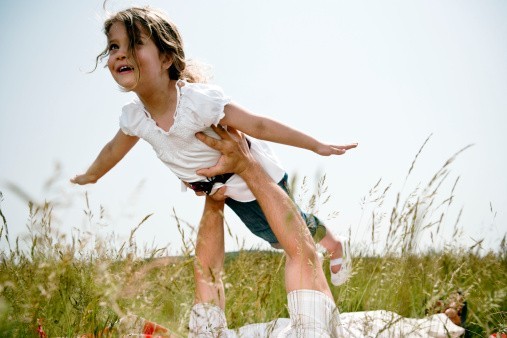 I am 1 in 4, and I am not alone
The Way They See Mother
You Think Mothering Might Break You, But You're Wrong
advertisement

I am 1 in 4, and I am not alone
The Way They See Mother
You Think Mothering Might Break You, But You're Wrong