Sorry Fellow Dads, I Was Wrong

Published by Damian Rodriguez on June 7, 2017 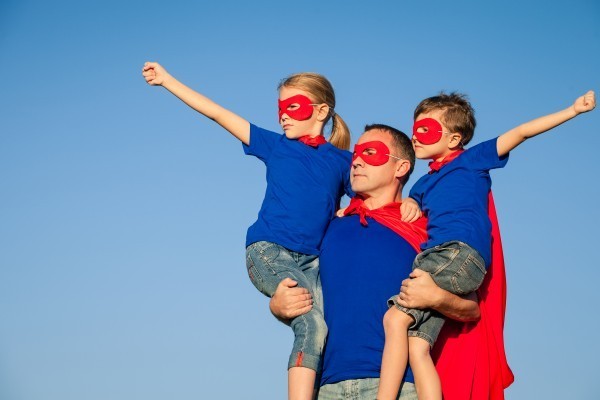 I’m just going to come out and say it: I was wrong. If you know me, those are three words that aren’t coaxed out of my mouth very easily. Men—fathers—as much as we would like to think that our little angels who can do no wrong make us happier and healthier, my beloved science says we are experiencing a focused illusion.

Straight into the mind of a scientist: we rely on data; it is our lifeblood. I make no decision in my life before collecting mountains of it. And we are very adept at mining it. Although I’ve written about what I consider irresponsible or bad data analysis before, as a professional, I’ve taken a vow to be as objective as possible when evaluating research. There is no doubt about it, in my mind, that being a husband and a father has made me a happier and a physically healthier person. I have set forth to prove and generalize my perspective through scientific evidence—but I am coming up empty. Sorry, I’ve dug deep, and there is nothing I can extract from the barren pit of data to provide evidence for my initial hypothesis.

There is one thing that is really clear, being married (at least if you are of the male gender) is a really good thing. Married men are healthier in just about every measurable metric than are lifelong bachelors. A systematic review and meta-analysis of the current research suggests that married men, on average, live nearly a decade longer than their single peers and exhibit more positive outcomes when it comes to pretty much every marker of physical health. The reasons are pretty logical and the data shouldn’t shock anybody. Married men manage illness better (without my lovely wife, a visit to the doctor may necessitate a completely missing limb), tend to adopt healthier lifestyles, and handle stress better and exhibit better functioning immune systems because they have built-in social support. It’s pretty hard to deny that females are the superior gender when you can make a clear association to the time we men spend with them and our physical, psychological, and emotional health.

My son being born was likely the single most exhilarating experience of my life. And I have some pretty objective measurements to make the definitive conclusion that being a father has made me a happier and healthier person. But I am either an outlier or a tad delusional about how objective my data really is. First off, a longitudinal study showed that fatherhood tends to result in a drastic decline in serum testosterone. This is not only a hard punch to the ego, but also a shot of adipose to our bellies. The levels of the muscle-building hormone in our blood is highly influential in our ability to put on lean mass and decrease body fat. And this isn’t just theoretical. Other longitudinal studies have clearly shown that becoming a father has a strong tendency to result in increases in weight and our pant size. Along with lower levels of testosterone, the chaos of sharing responsibility for the health and well-being of another (adorable, yet helpless) human takes its toll on your eating and exercise habits. And sleep. I know you didn’t expect that eight hours a night was going to happen anytime in the next three years did you? The “dad bod” is real.

But, there is nothing in this world that induces happiness and satisfaction like watching your posterity blissfully sleep…right? Not according to the research. Studies have shown that having a child can be trying, for both man and wife, and often for several years (oh, the joys of infancy and toddlerhood). It does get better once they’re out of diapers or at least when they ultimately leave the nest—or so I thought. Au contraire, there is quite a bit of evidence to support the premise that older parents whose children have left the home are slightly less happy and healthy than non-parents of similar age and status. Similar to the health data, the factors involved in this surprising conclusion are painfully logical: being a parent is really hard work that is taxing to our minds and bodies.

Now, read it a few times and take a picture, because I am unlikely to ever say or type it again: data shmata. If there is one thing I know, in spite of the data, it is that becoming a father changes you. It changes you to the core. What you will sacrifice and give up for that tiny little being is stuff that only Stan Lee can accurately put into words (and pictures). Even if my babies have provided a little hormonal detriment to maintaining my abs and even if they spend most of the waking day finding imaginative ways to challenge my stress threshold, there is no barrier I won’t jump over, no other-worldly mutant bad guy I won’t battle, and no blowout I won’t clean up to keep them healthy and safe. It is up to you, all of us, to take that fatherhood-fostered fortitude and use it to enrich our life, to make us healthier and happier. It’s a matter of looking at your life in a different way, a fundamental change in mindset.

We all want our children to be happy, safe, and better than we are. The best way to ensure your children will be better, is to be better yourself. Improve your own eating habits, find ways to integrate exercise into your now crazier-than-ever schedule, start taking your sleep regimen seriously; these healthy lifestyle behaviors will not only enrich and lengthen your own life, but also modelling them to your fidget-spinning munchkins greatly increases the likelihood that they will grow to be healthy as well. I’ve laid down the challenge: prove my beloved science wrong. With that dad strength, there is nothing you can’t do.

Hug Your Mom, for Your Health
Why you absolutely CAN and SHOULD workout while pregnant
Lifestyling Your Way to a Healthy Family
advertisement

Hug Your Mom, for Your Health
Why you absolutely CAN and SHOULD workout while pregnant
Lifestyling Your Way to a Healthy Family