Slut-Shaming: Teach Your Kids NOT to Call Girls the S-Word 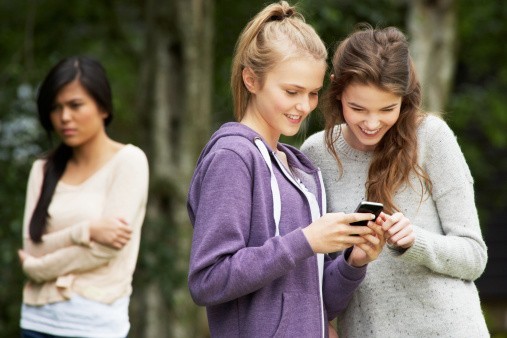 One night during dinner my friend and I asked her 14-year-old son to tell us something interesting about school. He said there’s a girl in his class that everyone says is a slut. His Mom immediately got uncomfortable and said, “Let’s just say she’s a girl of ill repute,” clearly knowing it was offensive, but unsure on how to correct him without getting all preachy. My 12-year-old son then joined the conversation and said, “Well, Joey called Laura a slut because she dated him and two other guys this past year.” Then my 9-year-old daughter piped in, “Mom, what’s a slut?”

Because I am particularly sensitive to the word, I replied, “A slut is a word boys call girls when they are threatened by their right to change their mind about whom they like.” My son got defensive, “The girls all call each other sluts, though.” And then yet another conversation about sexism occurred in my house.

But really, what’s with all of the slut-shaming — still — in this day and age? And how do we talk to our kids about it?

How do we teach them to respect women and not to judge, and yet still acknowledge that someone’s behavior makes them uncomfortable?

Girls start getting called sluts as early as sixth grade, well before they’re even sexually active. The first time I was called a slut was because a boy asked me out, and I dared to say no. My son’s friend who his buddy called a slut never exchanged more than a dry kiss with any of the three boys she dated in a year. (A year!)

Girls will often join in with their male cohorts in calling girls sluts as insults. Why? Maybe because it gives them an excuse not to put out. Maybe to bond with others by insulting a third party. Maybe because they’re discharging their own discomfort with the strong desire they have to be physical with someone.

Guys will call girls sluts for the same reason they do anything sexist. Because it gives them power. Because they can. Because they would rather put down a girl than acknowledge that she might not like him because he’s not her type: “I wouldn’t date her anyway. She’s a slut.”

Calling a girl a slut induces shame. It makes sex shameful. It makes a female’s desire for sex and sexual pleasure shameful.

It’s simply sexist to go around calling girls sluts. Even if they do sleep around.

There are some girls these days who use the word slut affectionately, like, “Hey, Slut, come over and marathon Downton Abbey with me.” This is different. You know it’s different. It’s not being used as an insult or to shame. It’s changing the power of the word.

So what do we do when our children express discomfort, judgment, or even disgust when a girl they know is very liberal with her affection?

Ask them, why do you think she does that? What do you think is going on with her? This is important because first, it can engender compassion for the person. Second, it can make them think twice about their own choices and motivation.

Ask them, if she were a guy, would they being saying that? Because the answer, whether they admit it or not, is No. And that’s just sexist. And we need to point out that dichotomy. Ask them how they would feel if they heard people saying that about a sister or a cousin?

When we allow, or even worse, encourage our kids to talk like this, we are permitting them to perpetuate the sexist attitudes we all grew up with. And respect for women starts now.

It starts young. And it’s our job to teach them early on to respect women, regardless of their personal sexual decisions, rumored or true.

E.J. Gordon is a freelance writer, a regular contributor to GIRLilla Warfare. Have any questions or topics that you would like her to address? Remember: No subject is taboo, and anonymity is accepted. Contact E.J. at: EJGordon529@gmail.com.