7 things I learned after 2 miscarriages in 1 year

I posted this to my blog a few years ago but I made it private because I wasn't ready to post about my miscarriages. When you write something and put it on the Internet, it stays there forever and I wasn't sure if this was something I wanted out in the open for the whole world to see. But I realize that the topic of miscarriages is such an important one. It's such a taboo topic, especially in the Asian community. I hope by sharing my story and the things I've learned from my miscarriages, it will help someone else who has gone through it or might go through it in the future.

My husband and I were married in 2009. We wanted to wait at least a year to enjoy being married before we really tried to have kids despite the fact that I was already 34 at that time. In the back of my mind, my biological clock was ticking but I didn't want to rush into having a baby just because of my age.

After our first year of marriage, we started "trying" to have a baby but we didn't get pregnant until January of 2011. You can imagine what we were feeling when we saw that "pregnant" sign on the pregnancy test. We were so excited! But I was also fearful of things going wrong. I tend to be a worrywart and have fear of the unknown. I was also scared of miscarrying but I tried to do all the right things like take my prenatal vitamins and go to all my OB appointments. Everything seemed to be progressing nicely. I had a 7 week ultrasound where I heard the heartbeat so I felt things were going well and that we would be parents in October of that year. Little did I know that just a few short week, one of the greatest heartaches of my life would happen.

Without going into too much detail, I had to go to the ER right before I was 12 weeks along because I started spotting which turned into heavy bleeding. I knew at that point that the baby was gone. Even though at the hospital, no one tells you until the doctor officially confirms it- I already knew. We were devastated. Those months after were pretty difficult and dark. But somehow we got through them.

Some time after, in October, we found out that I was pregnant again. We were very excited but it was different than the first time. Once you experience a miscarriage, it steals some of the joy of pregnancy. The miscarriage "taints" it in that it triggers your previous experience. You can't help but worry about it happening again. I did all the "right" things and took my vitamins, went to all my appointments and relaxed. But sadly this pregnancy ended in miscarriage when they couldn't find a heartbeat at my 9 week appointment. To say I was beside myself was an understatement. The months following were very dark times. I still had to work but I pretty much shut down emotionally and shut a lot of people and things out to try to recover from two consecutive miscarriages in one year. Some people were understanding and accommodating, others were not.

As I look back, here are some things I've come to realize: (These are my opinions and my realities. If you don't agree or are offended or think it's ridiculous, it is your right to feel that way just as it is my right to share with you my opinions and lessons.)

It's not your fault.

There really wasn't anything I could have done to prevent it from happening. I thought that if I took all my vitamins, read all the right books, went to all my OB appointments, didn't smoke or drink, and didn't lift heavy things that I could have prevented it. I thought maybe if I was younger or more fit then it wouldn't have happened. How could I not blame myself? I was the one carrying the baby so it must have been something I did or didn't do that caused it. But I realize now that it wasn't my fault because I couldn't control it.

About a year after my miscarriages, we hatched baby chicks in an incubator at school. We put 42 eggs in an incubator. They were all subjected to the same conditions and environment but only 36 hatched. That experience solidified the realization that in pregnancy some babies make it and some don't. In a weird way, it brought me some comfort because I think I was blaming myself for the miscarriages as if there could have been a way to prevent it.

In the days and months following our losses, I remember there would be days when I would just cry for no reason. Sometimes seeing a mom and a dad interact with their young child would make me lose it. At one point, I had to unfollow or hide posts of people on Facebook or Instagram who were pregnant or just had a baby. I just couldn't deal with it. It wasn't that I wasn't happy for them. I was very happy for them but I would feel such sadness because I couldn't have a baby. Crying helped bring healing because I was able to grieve and let out my emotions.

It's OK if some friendships end.

Following my miscarriages, I shut down emotionally and closed myself up and away from friends who were negative and unsupportive. I am normally a very accommodating and understanding person. But now I was the one in need of understanding and nurturing. They just were not there for me. Perhaps they didn't know how to be there since they never went through it but I couldn't handle any negativity while I felt like I was falling apart. Luckily, I had other friends who were encouraging and who really supported me even though they never went through it. Those are the friendships I still treasure to this day.

It's OK to talk about it.

Everyone has a story on their journey to motherhood.

Just because you see an ultrasound picture of someone else getting pregnant before you do, you don't know what it took for them to get there. I remember feeling twinges of jealousy and resentment each time I would see ANOTHER ultrasound picture on Facebook or hear about someone ELSE getting pregnant. But I realize I don't know the story of how they got there. They might have had fertility issues or had loss. I just don't know and it's not my place to judge or hate. But in that moment, I did have the choice to look away if I was that bothered by it. And honestly, I had to do that for several months. It might sound selfish to some but that was how I was able to cope and deal with my miscarriages.

You are stronger than you think.

After going through the miscarriages, I realize that I am stronger than I thought. In the midst of it, I felt like a hot mess and like I would fall apart at any moment. But I didn't completely fall apart. I got through it with the support and help of my husband, family, close friends, and some strangers who became confidantes. I know you will get through it too. You just need to take it one day at a time.

It will get better.

Maybe not tomorrow or the next day or even after a few months but it will get better eventually. That old saying about time healing all wounds is true in that as time passes there is healing that takes place. The healing might not look like the way you wish- you won't forget the trauma but it will become less as time passes. There will be days when you feel like you are losing it but there will be other days where you'll experience the new normal.

Personally for me I feel like I truly healed once I had a healthy baby. Prior to getting pregnant with A, time did heal me to a certain degree but seeing other people with healthy babies would still sadden me. Once I became a mom, I felt healed and restored. 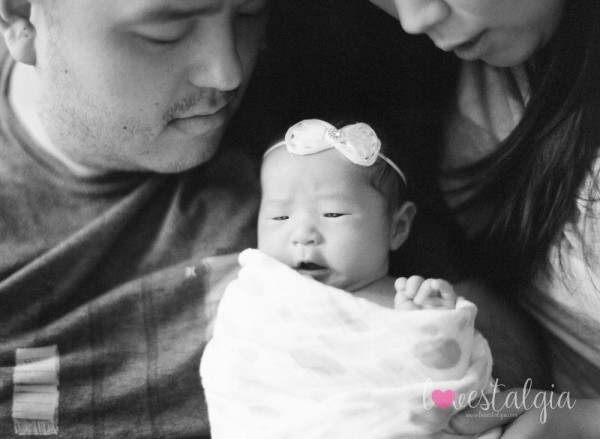 So for all you mamas out there who have experienced a miscarriage, it will get better. You are stronger than you think. You really are. Hang in there mamas. We are all in this together whether we are already mothers with babies in your arms or in heaven or yet to be in the womb. Thank you for reading.

Our Chronic Loss Story of Hope
Pregnancy after Loss
My journey to motherhood.
advertisement

Our Chronic Loss Story of Hope
Pregnancy after Loss
My journey to motherhood.