RNC Chairwoman: From CEO of my household to CEO of the RNC

I was in the middle of a Facetime call with my 16-year-old daughter recently when an unknown number beeped in. I knew exactly who it was: the President of the United States. This is no longer a unique occurrence in my life and fortunately my kids still think it’s cool when it happens, but it is an instant reminder of my constant effort to make two very important roles work together — mom and chairwoman of the Republican National Committee (RNC). While my boss may be more well-known than most, it’s a juggling act that all working parents know all too well.

As it turns out, my role as a mom was the motivating factor behind my foray into politics. I became politically active as a result of a budget crisis in my home state of Michigan that led to a favorite teacher at my kids’ school getting laid off. It made me realize how things that happen on the state level affect your life. So, I got involved. It started with knocking doors in my neighborhood, evolved into volunteering with my county Party, and in 2015 I became the chair of the Michigan Republican Party, just the third woman to ever hold the position. In 2016, President Trump won Michigan. It was the first time since 1988 that a Republican presidential candidate won in my state, a historic victory that we worked hard to accomplish. It was then that President-elect Trump asked me to make my biggest career leap yet: lead the national party as chairwoman.

It was an honor and a big ask. The President-elect was asking me, a stay-at-home mom from Michigan, to run the RNC. It would require me to be away from my family for long periods of time to take on a cause that was, to put it mildly, much greater than myself. Despite my initial reservations, my husband and kids were excited for me and encouraged me to embrace the opportunity. With their support, I said yes.

As it turns out, accepting the position was the easy part. As with any leap in life, it comes with its fair share of obstacles, but we women are notoriously good problem solvers. Technology has helped resolve most of the problems involved with being away from home. I use grocery delivery services to make sure my kids are getting a few vegetables in their diet, and we Facetime regularly so I can hear details about their days: how their biology test went, whether homework has been completed, the upcoming homecoming dance or baseball practice, and of course, where I hid the Xbox controller (they still haven’t figured it out, by the way).

Despite the challenges, this role has been incredibly rewarding. Since I became chairwoman of the RNC, we have broken multiple fundraising records, we made historic Senate gains in the 2018 midterms, and we strengthened our Party to make sure we re-elect President Trump in 2020. I am proud to lead a team that has accomplished so much and will continue to secure victories in the years ahead.

The point is that we cannot allow the “why nots” to stand in the way of the “why not me?” Whether talking to a woman who is considering a run for office or a friend mulling a career change, I tell women all the time that there is no one-size-fits-all, linear timeline for women. As we navigate parenthood and careers, we have to seize these opportunities and confidently say yes to them. I never could have predicted I’d be selected to run the RNC in my 40s, but it has been the most rewarding decision I have ever made, aside from being a wife and mother. This Women’s History Month, I’m celebrating the countless other women who have made similarly life-changing leaps and climbed ahead, undeterred by life’s challenges.

It is absolutely possible to fiercely love your children while also fiercely pursuing your passions and dreams. In fact, it is a great example to set for your kids. It means showing them what’s possible in their own lives if you work hard and stay the course. With courage and support from our families, and creative solutions to staying in touch, we are showing that it is possible to have an empowering career, be an inspiring parent and even improve your community and country at the same time. In my case, it meant answering the President of the United States with a resounding “yes.” 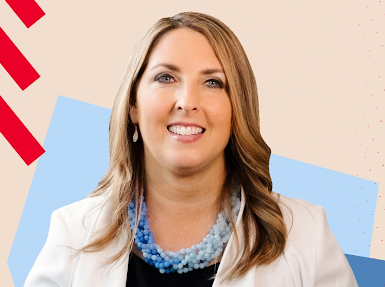 In 2017, Ronna McDaniel became the second woman ever elected as Chair of the Republican National Committee (RNC). Chairwoman McDaniel is married to Patrick McDaniel. Together they have two children, Abigail and Nash.

"Mommy, should I be scared that Trump won?"
My daughter is from one of 'those' countries
'Twas the Night Before Inauguration ... Here's the NEW Story To Tell Your Kids
advertisement

"Mommy, should I be scared that Trump won?"
My daughter is from one of 'those' countries
'Twas the Night Before Inauguration ... Here's the NEW Story To Tell Your Kids