Published by Stephanie Regalado on May 7, 2018

Been tearing up off and on all day. Decided to share the story with this photo and the daily photo editing filter was titled “superhero,” which sent the tears flowing again.

ManCub, my 17-year-old son, nightcapped with friends at Hotel RL in Spokane, Washington’s, after the North Central High School senior prom last night. Our original plan of me picking him up right after the dance changed so he could continue the fun. His dad would pick him up, while I went home and climbed into bed with my darling 2 1/2-year-old grandbaby Love Nugget, otherwise known as Princess Plum Cake. Her mama, daddy, auntie and “uncle” were in Canada celebrating the girls’s 19th birthdays.

Joe, the father of my children, called me at 2:30 a.m. to verify ManCub’s pick up location because he couldn’t find him at the (other) Red Lion Hotel, and Christopher wasn’t answering his phone after a text about a half hour before stating he had heard someone call for help and was going in the direction of the bridge to check it out. Joe and I stayed on the phone until he made it to Hotel RL and, again, couldn’t see him waiting outside anywhere obvious. Joe hopped off the phone to get out of the car and put a hustle on searching for our son.

We didn’t see coming what Christopher was about to share regarding his time and space when he was “missing.”

Christopher knew he had “one second” to decide to either go toward the cry for help or to turn away and head toward the meeting place with his dad. Before he could decide, he said, he found himself running toward the bridge, in complete darkness. He began to see the outline of a person perched up on the second of three bars with her body hanging over the top bar, wedged at her hips, looking down toward the raging river.

She wouldn’t turn toward him or acknowledge his presence through the fencing barrier, so he swiftly scaled it and slowly approached her, using a calm voice and asking her what was up, what was happening. He was scared he was about to “have to watch her leap off the bridge,” but he pushed closer, hoping to get within a distance he felt confident he could leap to catch her feet if she were to topple over.

The young woman finally looked back at Christopher, locking eyes with a “scary and terrifying look in her eyes,” he said. As though she wasn’t fully present. He asked her again what was up. If he could help.

She began sharing her life story with urgency, out of order and back in order and out of order again ... reporting years of abuse, and sexual abuse at the hands of family, and then, as though the greatest blow of all: a father who abandoned her.

Christopher listened, he said, validating her state of being by saying he couldn’t even imagine such horrible things happening to him and that although he hadn’t experienced anything like that or knew the pain the way she was feeling it, he could understand why she would want all that pain to go away. And that he didn’t judge her for feeling so hopeless.

She then shared she had watched one of her friends leap to her death from a Riverfront Park bridge years before, and that she remembered her friend “looking so beautiful,” that her leaping looked so beautiful. Christopher said none of us have any way of knowing if that experience is beautiful—that she had no way of truly knowing her friend’s experience was beautiful for her. But he did know the only way to gaurentee doing something beautiful was to stay alive and make it happen in our lives.

Eventually, the young woman sat down on the second rail bar ... the one she had been standing on. She shared she didn’t trust men and would attack them in the past if they approached her. Christopher thanked her for not attacking him, which made her smile. He shared a little bit about himself “so she could feel like” he “wasn’t some stranger she had no connection to.” She couldn’t believe he was only 17 and still in high school. Or that he had been celebrating his senior prom that night (he was still in his tux).

Christopher shared with her that he really wished he could comprehend the pain she was feeling, but there was no way he could. And he knew she had a special opportunity to help others who felt the way she did because she truly understood it. He said, if she chose to live, she could then help other people choose to live, as well. He asked her to think of the difference she could make considering how he could help her “without even knowing her pain.” And to imagine how much more she could do for others who had experienced similar pain.

The young woman eventually climbed down and made sure there was room for Christopher to sit beside her. They continued talking until he felt as though she had stabilized and was in a good spot.

ManCub went to give her a hug and then apologized because he remembered she was apprehensive around men. She said it was okay and gave him a “pretty big hug,” according to his reports. As they were saying goodbye, he had his hand on the rail. He asked her to promise that she would always remember a stranger could see how strong she was—and that, side note, choosing to die was the easy road; choosing to live was hard, and that she could do hard things because of her incredible strength), he made her promise that she would always choose to live.

The young woman placed her hand on top of Christopher’s and emotionally said “thank you.” Most everything else was blurry because of the intensity of it all. It was emotionally exhausting because he knew he “had to truly listen to every word she said and make sure” he was responding to it all as thoughtfully as possible. That his brain was racing to find the right words as it prepped to leap toward her if she were to fall over, or to defend himself without hurting her if she happened to turn toward him to attack him.

In the end, they both walked off the bridge together and as she walked on, Christopher went to meet his dad.

Christopher is doing okay. He says it was “quite the experience” and he’s still not sure what to think about it all. I asked if he knew how proud I was, and why I was emotional about it ...

He said: “Not really. I mean, if you hear someone calling out for help, you can’t turn away from that.”

May we all behold a little ManCub in each of us.

Many prayers to that incredibly strong young woman who allowed a stranger to come out of the darkness to answer her pleas for help. May her moments with Christopher and the words they shared stay tucked deep into her heart ... may they help her work toward making beautiful things happen in her life in spite of her pain and darkness. 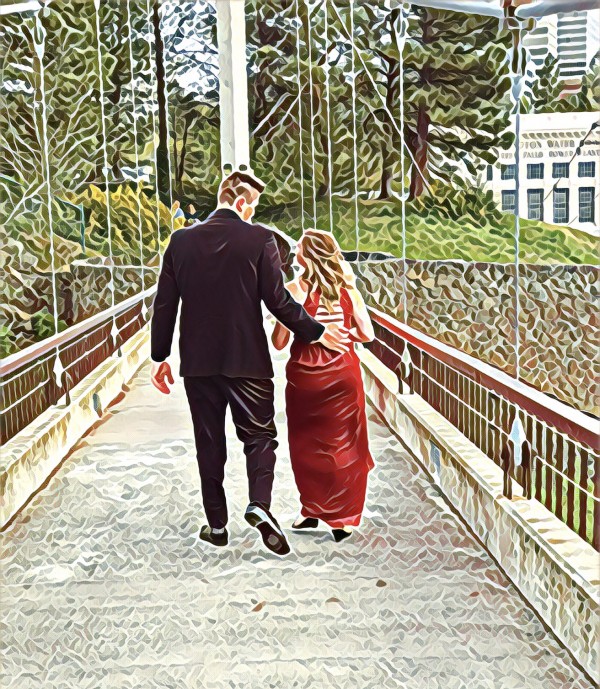 and Sierra, his darling girlfriend, in Riverfront Park for prom photos earlier in the day. 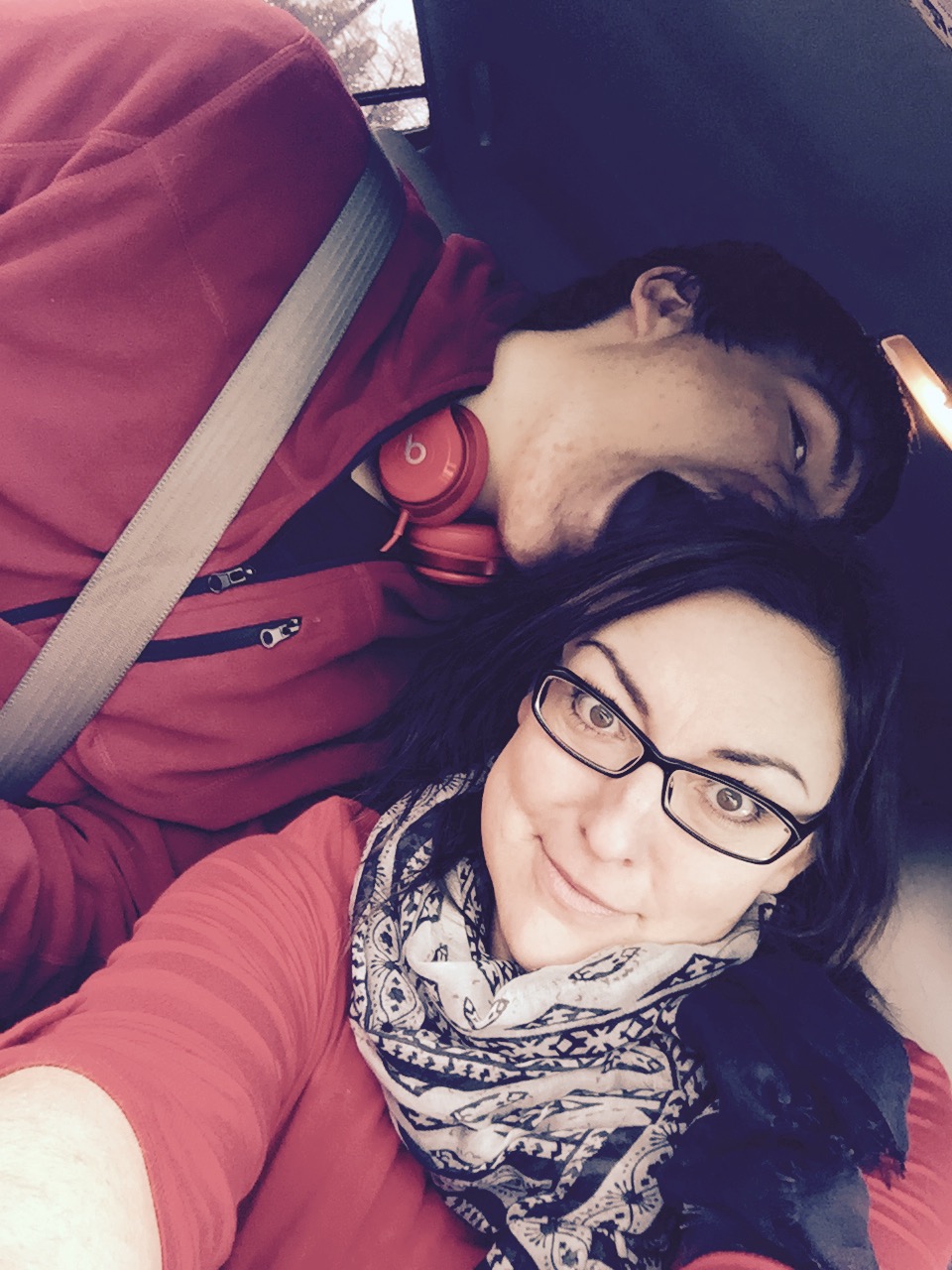 Stephanie Regalado had been a fierce advocate for building a community quilt of sisterhood long before working with Bozzi Media to launch Spokane Coeur d’Alene Woman magazine in January 2012. As the editor-in-chief of Spokane Coeur d’Alene Living magazine, she continues the pursuit of highlighting the inspirational stories of perseverance as a way to foster a sense of connectivity and humanity—believing that authenticity is the antidote of shame and the inspiration for acceptance, understanding, appreciation and love for others. She expresses these sentiments on her SisterhoodShared blog and in her podcast, SheSays. She is mom to four big kids (19, 19, 17, 13), one darling grand toddler (2 1/2) and two little insane canine beasts.