There’s a universal truth that babies are cute. And there’s a biological reason we find them so cuddly and lovable. It’s all about species survival. It's in their best interest to be loved, and it's in our interest to love our babies, because it keeps our species from going extinct. But now that we’re (slightly) more civilized, that cuteness should be reserved for the baby’s parents and immediate friends and relatives, not strangers.

How many times have you been out with your precious cherub and heard “Oh look, how cute!” *stranger grabs foot and tickles toes* I am ashamed to admit I used to be this person on occasion. Now that I'm a mom, I will never be this person again. I want to go back and slap my past-self and tell her "No touch! Not yours, no touch!!" (hey, it works on my toddler…)

So why is it socially acceptable for strangers to touch babies? And by socially acceptable, I mean that the person doing the touching feels like it’s acceptable, but more often than not, the parent is opposed. This isn't just a "U.S." thing, either. There is a woman from Indonesia who works behind the bakery counter at our local grocery store, and she always comes out to hug my son, hand him cookies, and tell him to call her "gramma." It's wonderfully kind, and I'm sure she has the very best of intentions. But my mom-radar sounds the alarm every time she reaches for him. And it’s not just because of so many recent viral videos and articles of people noticing human trafficking behavior. Trust me, my hair stands on end and I feel queasy every time I think about that possibly happening to me. 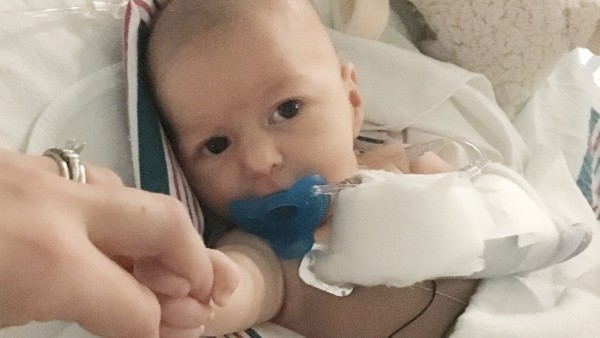 But instead, our immediate and unavoidable threat is germs. My son is immune compromised, so any exposure for him is risky. Whenever I see some sweet older lady reaching out for his "wee widdle tosies," an alarm goes off inside my brain. MAY DAY MAY DAY INCOMING ATTACK. Of course, there's no sign on my son's forehead that says, "Keep your grubby hands off, I get sick really easily," so I can’t expect anyone to know better. Besides that, in my (perfectly unbiased) opinion, he's just about the cutest darned thing on the face of this planet. So honestly, I can see why people would focus on him and every other perfectly plump, adorable, babbling little baby in sight.

For us, though, this behavior goes beyond annoyance. For us, it's a real danger to my son's health. Whenever people try to touch him, I politely place my arm between them and him and inform them that he's immune compromised. Typically they recoil and apologize immediately, but some just don't seem to understand. They keep reaching out to hold him, all the while cooing right in his face. This is when I just smile and say "Thank you, have a nice day" and try to remove him from the situation.

RELATED: To the mother of my son's organ donor

But it shouldn't have to be this way. I don't want to offend people by asking them to back away from my kid, but at the same time, I can't let just anyone touch his hands and feet and expose him to more germs. Because guess where those little hands and feet go. Yep, straight to the mouth. It's like they're magnetic. And he's lightning fast, too. I try to routinely wipe him down, but it's to no avail. Resistance is futile.

The only way to solve this problem is to combat the cultural acceptance of touching babies that aren't yours. Just like when it comes to petting someone else's dog, you should ask first. Odds are, when you ask someone if you can touch their kid, you'll realize just how creepy you sound and you won't do it. You'll realize that maybe it's not as acceptable as it seems.

And it's not just strangers that we deal with. Whenever someone we know wants to hold him, we ask that they wash their hands. Typically they are more than willing, and many who know his story even ask for a wipe before reaching for him. But every once in a while, I get the old "Oh, I washed them a little while ago when I went to the bathroom." That's awesome. But do you have any idea what you've touched since then? Unless you're like me and use a paper towel, you probably touched the bathroom door and/or door handle, the first things people who DON'T wash their hands also touch. You probably touched your phone, your face, perhaps your keys, and at least a dozen other things that are smothered in bacteria. Am I a germ freak now that he's compromised? Yes. Yes I am. But it is in no way unreasonable for me to ask you to clean your hands again. It's part of the cost of holding my son. Consider yourself lucky I'm not asking you to mask up and change your clothes, too.

The bottom line is, we need to be mindful of boundaries. If you're one of those baby-toe-ticklers, I beg you to stop and think about possible repercussions of that seemingly harmless act. And if someone asks you to be mindful of spreading germs to their child, even if you find it utterly ridiculous, you should respect their request. You never know what they’re up against, and your germs might just be the tipping point.

Kate Harris is an aerospace engineer and a writer. She is also a baker, quilter, wife, and the mother of a heart transplant warrior. Kate writes for other transplant parents at www.katetheheartmom.com.

Please Don't Touch My Baby!
In a world of masks, be sure to smile with your whole face
Don't Treat My Son With Autism As If He's "Less Than"
advertisement

Please Don't Touch My Baby!
In a world of masks, be sure to smile with your whole face
Don't Treat My Son With Autism As If He's "Less Than"