Published by Stacey Tadlock on October 22, 2019 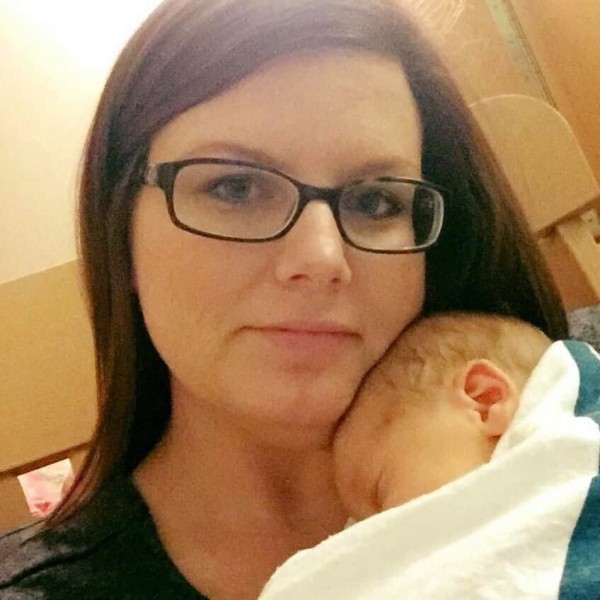 From this photo you would never know days earlier I thought I was watching her die.

My daughter nearly died at just four days old from the common cold.

I have never been able to write out her story, I try, but the memory of believing I was losing her is hard to revisit. She is almost two now and doing awesome, but she woke up this morning with her first cold of the season and God urged me to tell her story, if it just helps one family not go through what we did.

In January 2018 I stood in an ER triage room and I watched what I thought was my daughter dying. Her arms and legs went straight and stiff. Her eyes froze in position—the light completely gone from them. I screamed her name, waving my hands like crazy in front of her tiny face and nothing, no movement. No flicker of anything in her frozen eyes. The machines were dinging and sounding and I was screaming, “IS SHE DYING, IS SHE DYING?”

The nurse called to the doctor and they were both scrambling around my baby. More people came running in and surrounded my tiny six pound daughter who just 36 hours earlier had come home from the hospital after birth. With everyone surrounding her I could barley see her and in those moments I just kept thinking, “How am I going to tell my husband she is dead, how am I going to tell her four year old sister, how am I going to keep going into tomorrow if this is it?” I have never been more scared than in those moments.

As I stood there helpless I finally I heard someone say, “Her heart rate is back to normal” and my mind returned to the present. One of the doctors approached me and began spouting questions so fast my head was spinning, “Meningitis, GBS, HPV, Influenza…” and more words I didn’t understand.

My husband finally arrived after being held in security because he triggered the metal detectors when he tried to come through. He was carrying a small folding pocket knife (which he always has in his pocket).

He arrived and I tried to tell him what happened but the words didn’t form from my brain to my mouth and I just started crying. The doctors told us we had to leave, we had to leave our tiny newborn daughter with them and we had to go wait.

I asked my husband to pray with me over our daughter, we stood on each side of her and we prayed for our daughter. After the medical staff allowed us to pray we were escorted to a tiny little closed off room with just two chairs, a phone and a table.

I finally found calm within myself—that I know was only supplied by God—and I told my husband what I witnessed. Then we sat silent and and paced in my thoughts…

“Why are we in this room and not the main ER waiting room?”

“This is the room they put parents when they plan to tell them their child didn’t make it.”

“Why is this room so small?”

“What are they doing to my baby?”

“Is she scared, does she think we abandoned her?”

I tried to remind myself, God is with her. God is in that room with her even though we are not, remember that.

I really don’t remember how long we were in that little room, it felt like eternity.

We were finally told we could go to a room and wait. We were told our daughter was stable, she was being admitted, and we were taken to the PICU. We waited for what seemed like a million years but finally they came with her. She was wheeled in a tiny clear plastic bassinet with rolling monitors and IV’s following behind her. They told us they did a lumbar puncture that was unsuccessful because she was just too tiny. We were told they started antivirals, antibiotics, and other medications all flowing through her IV. We were told they were doing a full court press to hit anything and everything that could be trying to take her from us. We were given papers to sign saying we understood one of the medications could cause deafness, but being deaf was better than being dead, so we signed it.

We were there seven days.

She had NINE lumbar punctures. Nine needles in my baby’s spine to try to find out what was wrong. Her spinal fluid was too low so a viable sample was never achieved. Towards the end of our stay her lower back was so sore that just the brush of her diaper caused her to cry out in pain. On day five the team of doctors came early, before 6:00 am and said, “We don’t know what she has, the blood from her finger prick looks good, the best option is to start taking her off meds and see if she remains stable.”

So one by one through out the day the medications stopped until she was only on fluids.

Late in the night on day 7 we were told since she has been stable for 24 hours we could begin discharge. We were told by the doctors they believe our daughter simply had what we call the “common cold” and that she most likely picked it up from the hospital staff when she was born or possibly a visitor at the hospital.

She almost lost her life from what you or I simply cure with chicken noodle soup and over the counter medications.

We went through the horror of not knowing if our daughter would live or die because of the Common Cold!

I understand when most people get the cold it is mostly a annoyance, a slight runny nose, a light cough and people typically go on with their normal daily routine, go to work, go to church, go to the grocery or out to visit friends and family. We take some cough syrup and go about our lives.

A newborn baby is different.

A newborn doesn’t have the physical capability to fight the cold, even if the baby is born perfectly healthy, the cold could take their life.

The nurse during my delivery was congested and coughing. She was the same nurse who delivered my first child. When she said it was allergies I trusted her.

Maybe it was allergies and maybe the cold came from a hospital visitor who coughed over my baby as she was wheeled in an open bassinet to our overnight room from delivery. Maybe it was another staff member who was in the nursery when she was weighed and measured.

If you have even the slightest sickness and you work around newborns—stay home.

If your friend or family member has a baby, wait to visit if you’re feeling a bit under the weather.

What is cured with noodle soup and over the counter cough syrup for me or you is the same sickness that almost killed my baby.

When in doubt stay away. It could save a life.