Nobody puts baby in a basket 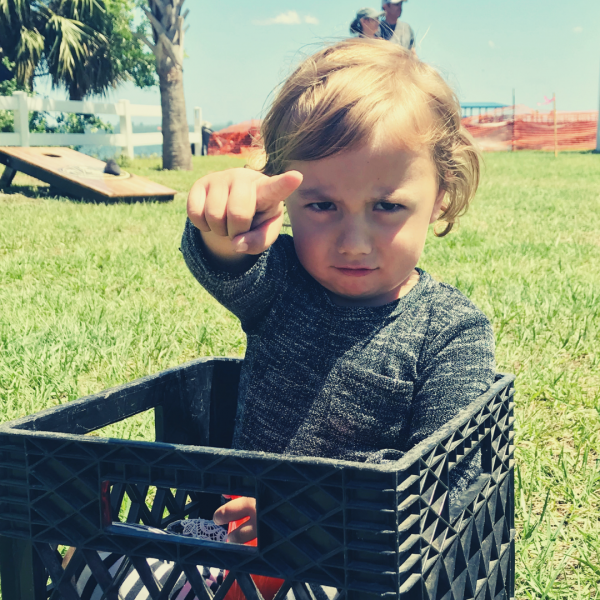 Nobody puts baby in a basket.

Or whatever the heck that thing is.

Nobody puts baby in it.

And by "baby," I mean toddler because even though that sweet soft-curled hair princess is my baby, she'd be irked that I called her one.

She just turned "tweee," and for those of you that don't speak little kid, that is t-h-r-e-e.

Still, nobody puts my baby in a basket.

Unless you are trying to play cornhole and she keeps stealing all the bags and standing in the way of everyone's throws.

Because, in that case, you have every right to put the baby in a basket, a corner, or at a table with a whole tin of cotton candy.

At least that's what I would I do.

That I would suggest or even encourage you to pacify your child with a sweet treat, exile her to a grassy patch or pretty much jail her inside of a crate which purpose is clearly organizational or decorative and not to be used as a trap.

Because for the rest of us to have a well-ordered and fun game of toss the bag in the hole, she needed to be removed from the hole where she parked herself merely because she found it amusing.

That boss baby, the one you see in the photo above, she's my third child, and she is strong-willed and ornery. She's also as loving as one can be and cute as hell with an endearing Minnie Mouse-esque voice to boot and that, my friends, is why 90% of the time she gets what she wants.

Not when it makes her unsafe.

Not when she's flat-out rude or disrespectful.

And, not when she's just forcing her way on things.

But, she's newly three, has a pretty good bottom lip pout, always commenting "I need a hug," tells me that I'm her best friend, and when she looks at you, she looooooks at you and through your peepers right into your soul making a pit stop at your heart on the way.

Hence, why we all love her so much and "give in" to her on the regular.

She may not always be this cute, though I have a feeling she just might.

But, sure as heck, her demanding and attention-seeking behavior won't be looked too fondly upon by me, the hubs or anyone for that matter as she grows up.

And, because of this, as of late I have tried to be a bit more firm with my tiny tyke and refusing to let her run the reality show which I, many years ago, put into production.

Can and should she be at least one of the stars?

And, when you have such a Beyonce in the family, you need and must force those breaks upon them whether they like it or not.

And they won't like it, and you'll know it, but, and I say this with the utmost love for her -- oh well!

Life isn't about always getting what you want when you want it.

If it were, I would win the lottery every month right before preschool tuition is due.

So, today my baby is in a crate.

Because the four other members of this family want to have fun too, and well, she was quite literally getting in the way of such.

Don't worry, though; she was only peeved for like two seconds as her attention span and feelings fluctuate on a dime.

Speaking of dimes, she happily sat in her little black box playing with a few dimes hiding them and then making them reappear, dropping them then picking them up and so on.

You see, my mama didn't raise no fool, and I'm not raising one either.

I'm raising kids who know that even though they will occasionally have to sit on the sidelines out of fairness or for the good of the whole, that they must make the best of their situation, heed any opportunity for self-directed fun and find joy no matter what.

Nobody puts baby is a basket.

And, I'm sure I will again.

She Would Have Made a Great Big Sister
To my threenager: You do you girl! I’ll just be hiding over here.
30 weeker
advertisement

She Would Have Made a Great Big Sister
To my threenager: You do you girl! I’ll just be hiding over here.
30 weeker