17 Little Pink Lines. A story of recurrent loss and hope.

I recently went to pick my 5 year old daughter up from school and carried in my newborn in her carseat. A grandma of another student said “Girl or boy?” whilst pointing to the car seat. I replied “girl” and her response was “keep trying.” I laughed it off but in my head, I was thinking “if only she knew.”

I met my husband in 2003. I’m British and was living in the USA for a year teaching in Illinois. We were engaged 5 months after we met and married a year later. I took a gorgeous 6 ft 2 souvenir with me home to Britain. A year after we got married, we started to talk about starting a family. We decided that we weren’t going to actively try but thought would see what happened if we stopped using contraception. A few weeks later, I was pregnant. I was excited and my husband was slightly terrified. I’d chosen a beautiful red stroller, thought about names, and knew when the due date was. We told our parents and everyone was thrilled for us. A few days later, I started to have pain and cramps. After spending a couple of nights in hospital for a suspected ectopic pregnancy, it was determined that I’d had an early miscarriage.

Although I’d only known about the pregnancy for a few days, I thought of the future life we’d lost. I’d pictured how our life together would be as a family and suddenly it was taken away. After that first miscarriage I tried to focus of the future. We can try again, next time we will be lucky, lots of people lose a pregnancy, we will be successful next time. I had no clue about the journey we were beginning.

A year later, we tried again and I became pregnant quickly. Yet again, I started to bleed just a few days after a positive test. This time it was harder to bear. Thoughts were constantly running through my head “What did I do wrong?” and “What is wrong with me?” My OBGYN ran many different tests and everything came back as normal. She then referred me to a fertility Dr. Our journey continued and I felt that this doctor would be able to help. However, the early miscarriages kept happening.

I became a recurrent miscarriage patient. It felt like no one around me really understood how it felt. My losses were early, so physically they were tolerable but they were hard mentally. I went in for a blood test one day and the philibotomist started asking me questions. I was very open and she told me that I could borrow one of her kids if she liked. Wow, how do you respond to that? I reached out to groups online and met a group of wonderful women who were in similar situations to me. They became my support squad as I was for them.

In 2010, a new doctor started working at the fertility group and although I never met him, I am forever thankful to him. He reviewed my case and told me to see Dr. Mary Stephenson in Chicago. I’d had six miscarriages by this point and was starting to give up hope. Dr. Stephenson ran more tests and was so very thorough. She adjusted some medications and we were able to try again. We continued to have losses but each time Dr. Stephenson continued testing and she never once told us that we should probably try other options.

In 2012, I had my 11th pregnancy. I went in for my weekly ultrasounds and each week it was a surprise. We got to see a heartbeat on the screen. I felt like I was holding my breath each week on the drive to Chicago until I saw the heartbeat. Was this really happening? The pregnancy kept going and we started to become excited. My parents bought us the bright red stroller I’d chosen years before.

At 24 weeks, my blood pressure was slightly elevated and my feet were so swollen that I couldn’t get my shoes on. The Dr put me on blood pressure medicine and I went home. A few days later, my husband was out for the night and I thought that I should check my blood pressure to see if it had come down. It was sky high. I checked it again the next day and it was higher still. I called my OBGYN and was told to go to the hospital. The next day, I found out that I had preeclampsia. Four days later at 25 weeks and 4 days, our son was born via emergency c section. Our little 1lb 6oz miracle was here and we had become parents. We were terrified and excited to see our little man. He was the size of my husbands hand. We were on the NICU rollercoaster - he would make good progress for a few days and then he would have setbacks. We were there every day sitting by his incubator trying to understand how to be parents in the hardest of times. We had moments of joy and our skin to skin time was the most magical thing I’d experienced. At 58 days old, our miracle took his last breath. The fight was too big for our little man.

Words cannot express how it felt to lose our son. Being a parent of child loss is a club that no one wants to join. He was our first child and the love never dies. I love to hear his name. Being his parents showed us how much we could love. The love that we felt helped us to make our decision to keep trying.

We had two more early losses after we lost him. In 2014, I saw those two lines on a pregnancy test for the 14th time. We went in for the weekly ultrasounds and every week, there was a heartbeat. I was very hopeful and yet again allowed myself to dream. After 12 weeks, I graduated from seeing Dr. Stephenson and went to a team at Northwestern. My fears were not only pregnancy loss but also preeclampsia and child loss. My first goal was to get to 28 weeks. When I passed that my goal was 32 weeks. In early 2015, I made it to 37 weeks and a planned c-section. My beautiful daughter had arrived. We couldn’t believe how lucky and blessed we were.

Our journey had lasted ten years. Ten years of teaching and loving other people’s kids and yet longing for my own. Our daughter brought so much love and joy to our lives. I think she has some of the elements of strength and determination that it took for her to arrive.

Two years later, we decided we were ready to try again. I became pregnant quickly and the pregnancy stuck. We had the genetic testing completed at 10 weeks and found that we were having another boy. We flew home to the UK at 14 weeks and started to buy a few little outfits for our second son to wear. I was honestly terrified that he was a boy, somehow wondering if gender had anything to do with my losses. At 17 weeks, I went for a check up with my Doctor. She put the doppler on my tummy and it was taking forever for her to find a heartbeat. She stepped out of the room to find a handheld ultrasound. No heart beat. To be sure, they transferred me to another room for a regular ultrasound. They confirmed that our second son had died. I experienced a late term miscarriage and the painful procedures that followed. This was not a loss that I was able to get over quickly. I felt like it broke me.

A year later, we talked about trying one last time. I really wanted another child and sibling for my daughter. We were so happy as a family of three and yet something kept pulling me to keep trying. We had another early loss. I persuaded my husband to try one more time. I may have told him that it was the last time we’d try a dozen times over the years. I turned 40 and knew that time was running out and I didn’t want to keep trying for much longer. We tried and for the last time I saw those two pink lines.

My pregnancy progressed and I graduated from Dr. Stephenson for the third and final time. I was monitored closely and my team of Drs. were amazing. At 34 weeks, I developed preeclampsia again. Our second daughter was born in the middle of the night via emergency c section. Once I heard her cry, I knew our family was complete. She spent a month in the NICU before coming home.

This journey has taken 15 years and has been all consuming. There were many moments we considered giving up on the idea of having children of our own. I’m stubborn and also very lucky to have three beautiful children. When I push that red stroller carrying my beautiful baby with my 5 year old and husband at my side, I am so thankful. 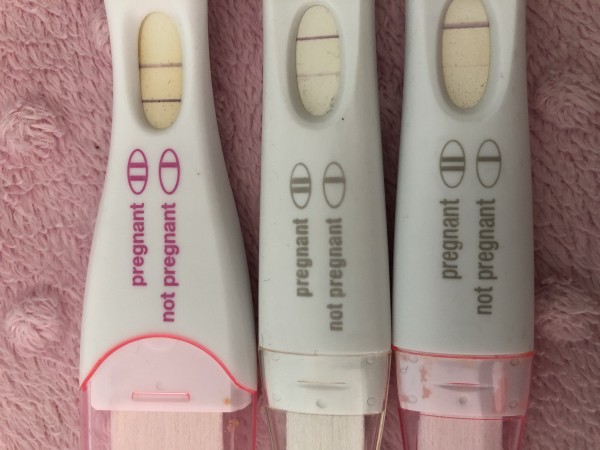 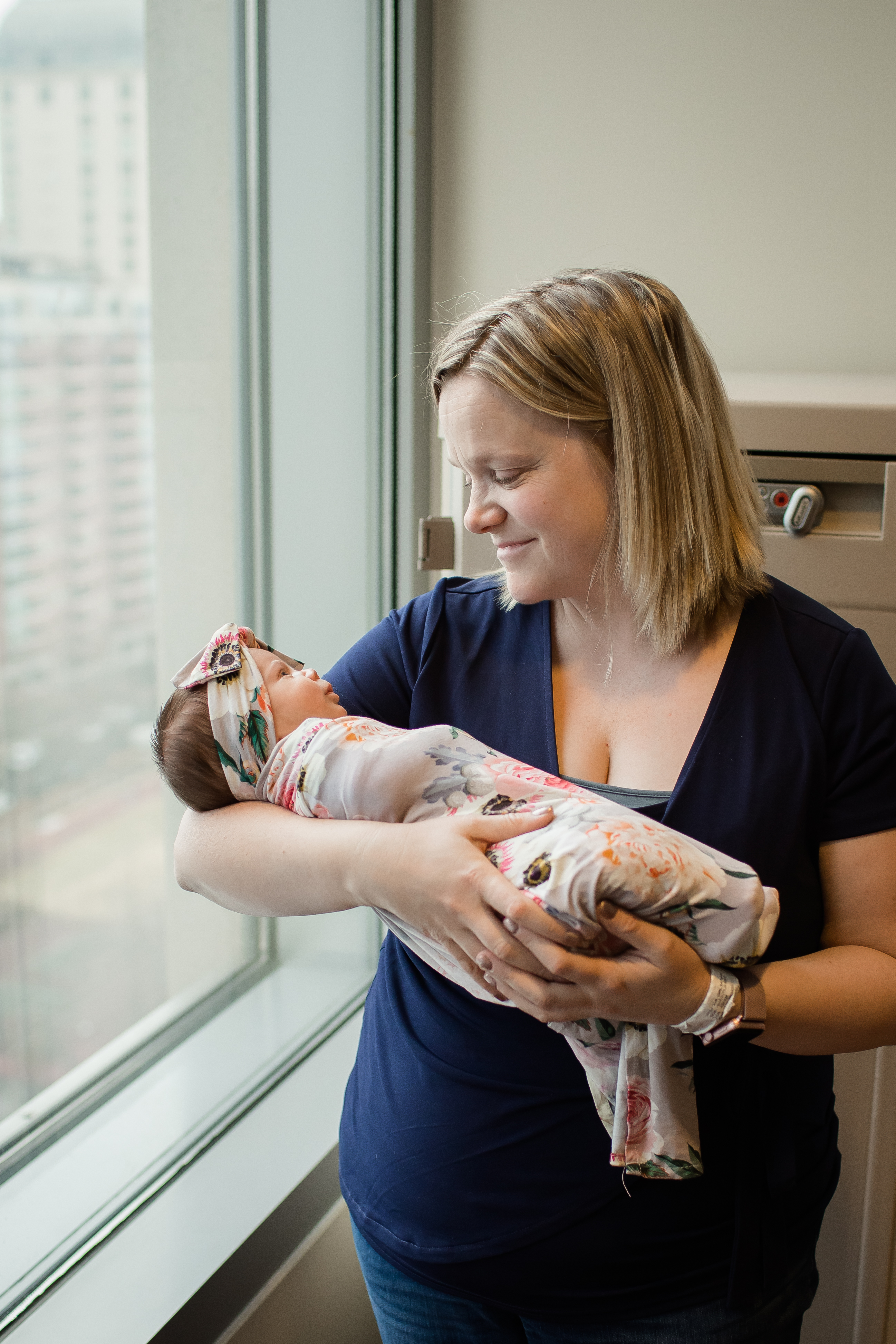 My name is Sarah. I’m a Brit living in Indiana, USA. I have two beautiful girls here on Earth and an angel son in Heaven, along with many babies that we never got to meet.