My One Tip for Surviving Thanksgiving with Two Small Children

Published by Jamie Johnson on November 20, 2018 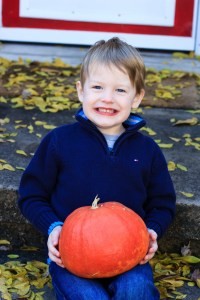 I am in the part of my life that media has labeled "in the weeds" as a mom. I have a one-year old and a four-year old. Both little boys. Both stubborn and headstrong, just like their Mom and Dad.

My one-year old, Simon, is a crawling wrecking ball. He paves a path of destruction everywhere he goes. If he can see it and touch it, he will throw it across the room. He has an incredibly good arm for a toddler. If it's too big or too heavy to throw, he will push, shove it, knock it over or scream so loud that you cannot ignore it.

My four-year old, Henry, is a running wrecking ball. He has an amazing imagination and a love for all things superheroes. Which means he likes to practice his superhero moves at the most inappropriate times, like church. Or midnight. On top of my bed. While I'm trying to sleep.

So yes, my hands are full.

But what is my one tip for surviving Thanksgiving with my little wrecking balls? I know you're on the edge of your seats.

I lower my standards.

Yep. I decide to give zero fucks on Thanksgiving and I enjoy myself and my time with my family.

I know, that makes me sound like a pretty shitty mom, but don't worry, I'm not letting them stick their fingers in electrical sockets. They aren't bathing with toasters. I just chill out and a few of my normal mom rules slide.

I let them eat what they want. I know that every relative I have will be handing them a cookie every chance they get. Just roll with it instead of attempting to pry the 17th icing covered cookie from their sweaty little palm while they scream "Noooooooo!" at an octave that makes all dogs in Kentucky begin to bark.

I don't worry about naps. I used to worry about naps and they never happened, which made me feel like I was failing. So now, I don't force the boys to go down for naps. Once their sugar highs wear off, they will fall asleep if they are tired. It might be in the middle of the living room floor at my Aunt Leslie's house, but everyone can step over them. It might be on the car ride home from Thanksgiving number three of the day, which would be perfect, but we all know that won't happen.

I don't yell at the boys not to run in the house with their cousins or not to play with the 5,000 piece set of Legos in the living room. It's Thanksgiving. And time to chill out for a day. And if that means lowering my standards to enjoy myself all day, you better believe I will. The Legos will be cleaned up at some point. They will get tired of running at some point. Or they will be forced outside into the backyard at some point.

Because nothing is worse than being stressed out on a holiday where you are supposed to be thankful for your blessings. I don't want to end Thanksgiving with a headache because I gritted my teeth and whisper/yelled at my kids for ten straight hours.

So that's it. To enjoy Thanksgiving with your two babies, your significant other, and thirty of your closest family members, lower your standards. Let the kids run, play, eat as much macaroni and cheese as they want, lick the icing off all the cupcakes, wear their Spiderman pajamas and wreak havoc.

That means you can relax in your nice yoga pants while drinking a cold beer. And if you are lucky, one of those little wrecking balls will crawl into your lap, give you a kiss, and tell you they love you. And there is nothing I more thankful for than that.

Embrace the Chaos: Surviving the Holiday Season with Kids
Mom Guilt: The Never-Ending Story
Maybe My Husband Was Right...
advertisement

Embrace the Chaos: Surviving the Holiday Season with Kids
Mom Guilt: The Never-Ending Story
Maybe My Husband Was Right...