My Labor and Delivery Nurses Weren't Holding Cards, Just My Hands and My Heart 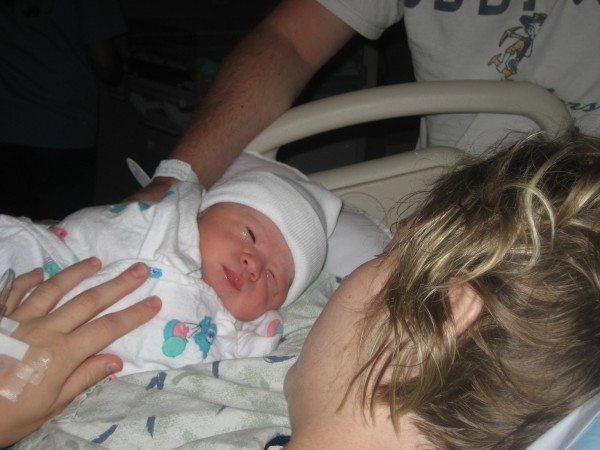 I don't know of any nurses who “play cards” while on duty.

At least I've never met one.

Instead, the only nurses I've known are ones who've been so focused on helping me play the hands I've been dealt, that they haven't had time to play their own.

There was the one who cared for me during the birth of my first child. The one who relieved my pain and served me continuously during hours and hours of hard labor. The one who saw the color drain from my husband's face, and promptly sat him down with juice and crackers. The one who handed me my brand-new daughter, and matter-of-factly stated that she was the most beautiful baby she'd ever seen. The one who lifted my weary body out of bed and helped me use the bathroom. The one who hugged me in the parking lot of the hospital after ensuring that my precious cargo was secured safely in our car. The one who said “you're going to be the best mom,” before turning around to go assist in delivering another baby, and support another mama.

That same nurse and I crossed paths a few years later, when I hadn't been dealt such a lucky hand. She was the one who helped me into a wheelchair and rolled me from the ER to Labor and Delivery, where we fully expected, that at just 19 weeks pregnant, I would be delivering my baby. The one who expressed her sorrow over my circumstances and held my hand after finding the heartbeat that was soon to fade. The one who acknowledged my baby's humanity even though it was slipping away.

There was the nurse who helped deliver my stillborn baby. The one who held my hand and cried with me when the baby card slipped through my fingers and left me empty-handed. The one who shared her own story of loss and understood my pain when no one else did. The one who called my dead baby by name, wrapped him in a blanket and covered his tiny head with a bonnet. The one who took the only photographs of my child that I would ever have. The one who fed me, carried me, and helped me use a bedpan. The one who guided me through some of the most heartbreaking and humiliating circumstances with nothing but compassion. The one who stayed well past her shift and held my dead baby, commenting on how precious he was. The one who handed him to me and the one who, with tears in her eyes, took him away.

There was the one who closely monitored my rainbow baby, knowing I'd already experienced a losing hand. The one who kept watch over his heart, his every move. The one who took every precaution to ensure the well-being of my son. The one who handed my screaming baby to me, alive, and the one who held him when the crying didn't stop. The one who calmed my fears about the bond between my son and daughter, after I'd been told numerous times that they would be “too far apart” to become attached. The one who sent me home with full arms as she rushed to meet the shrieks of another woman in labor.

These nurses weren't holding a deck of cards. But they did hold my hands and my heart through both the best and worst experiences of my life.

And I will forever stand in gratitude and awe.

To my labor and delivery nurses
If the Boxes Could Talk
My way of giving back...
advertisement

To my labor and delivery nurses
If the Boxes Could Talk
My way of giving back...