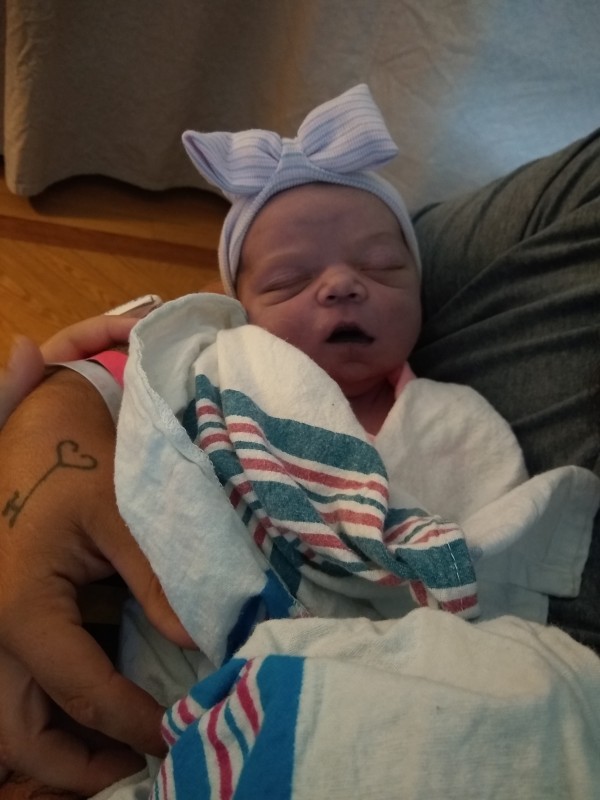 Its been 1 month and 8 day since I've experienced honestly the most painful thing I've been through in my life.

I never expected to head to the hospital nervous yet so excited to welcome the newest addition to our family into the world only to come home empty handed and broken. 40 weeks and 2 days I carried my precious daughter without a single complication or sign that anything was wrong. Everything in labor was going great I was nervous but ready. Ready to push and ready to hear her first cry. Ready to hold her and begin my life as a mother of 3.

Things took a turn for the worst after at 7 cm dilated they noticed she had a bowel movement in utero, heartbeat was still strong but in minutes her heartbeat dropped and the began to prep the OR for an emergency c-section.

Even in that moment I wasnt afraid they midwife reassured me that it was common for babies to have bowel movements when they became over due. So I figured she was in distress but they've got this. Into the OR we go and in less than 30 mins I'll hear her cry and get to see her precious face.

In the OR they gave me more epidural and gave it a moment to numb me so they could began a procedure they've done plenty of times. I was so nervous and then panic set in. I felt them and my typical reaction to high levels of pain is to scream. So I did, they put pressure on my voice box and under I went.

Even then I thought she'd be fine, epidurals arent always prefect and when I wake up she'll be here.

Waking up in recovery, my first question was "Where's my fiance?" I never got the chance to see him in the OR. Truth is he never made it in the room he was turned around before he made it there.

They gave me a few moments before givimg me a pillow to hold against my incision when I coughed, sneezed, cried or laughed. The nurse then attempted to button up my gown. I stopped her and said "Its okay, I want to be able to get her to latch as soon as I get upstairs." The nurse left me be with no response and off I went heart racing with excitement. This was it I am going to my room to me my fiance and my precious baby girl.

Only everything was different, alot different. I wasnt wearing my glasses so I couldn't make out anyone til they came close enough. Rolling into the room I saw visitors, but the pained expressions on their faces will forever be in my mind. My cousin came over and held my hand asking me how I was. I said "good" and I attempted so hard to read her face but I just couldn't. I asked "Where's Damian?" (My fiance) That's when my cousin stepped a side and said right there. I saw his figure sitting over on the window seat. So I called him over, his face had a look of complete and utter pain. He began to sob.

Thats when it hit me, as the most painful words I've ever heard came from his mouth. "She didn't make it" I bawled and hugged him. I wanted nothing more than this moment to be some anesthesia induced nightmare. I was ready to wake up.

Then in came the doctors, the had a pediatric doctor break the news to me yet again. As tears streamed down my face while the doctor who preformed my c-section stood by the door in silence. After he was done talking a nurse asked some questions and then asked if we'd like an autopsy. In the moment I said no because I was just ready to see her and hold her. Somewhere in side I was begging this all tp be cruel joke. I regret not getting an autopsy because now I'm left with no answers as to what happened. What caused my precious little angel to be ripped away so soon.

They brought her in and all I could do is cry. She was so absolutely perfect. I held her and rubbed her face yet again waiting for her to move or respond. We spent time with her til I finally asked them to take her.

They came back with more questions regarding our final wishes for her. I was so clueless as to how to even answer. We were super fortunate to have the cost of her cremation fully covered by the funeral home suggested by the hospital.

Later in the day we spent more time with her, saying our goodbyes ask time was ticking and we agreed to donate her heart to CORE. I wanted some part of her to live on if it was capable of being transplanted. I didn't want someone else to suffer a loss like this.

On September 4th we finally got to get ready to go home. I pushed so hard to get up and moving I wanted to go home to my boys.

Leaving the hospital empty handed and broken was not how I ever intended to go home and nothing could have prepared me for the reality of going home.

My parents went to my home before we got released and put away all of the stuff we had set up and prepared to bring home our precious daughter. Walking into the house felt strange, I just couldn't shake the feeling this was just a nightmare and I'm gonna wake up now. I just didnt want to face reality.

I thought coming home would get easier, I could focus on my boys and find a more positive mind set. I didn't know how to explain to a 4 and 5 year why my stomach was gone but yet I didnt bring their baby sister home. I did the best I could with the help of their dad. They honestly still don't really understand at this point either.

Fast Forward its been a week Ive been hiding in a shell of numbness and sleep. The funeral home calls.

The ride there was pretty quiet I was ready to be able to finally bring what I had left of my precious baby home. I never expected to be handed a tiny white plastic container. That's all I got, I didnt understand what went wrong.

The drive home was silence and tears streamed down my face. Having her home has helped the harsh reality set in. This isn't a nightmare I'll ever wake up from. All I can do it remember her, keep her in my heart and find my brave face for my boys.