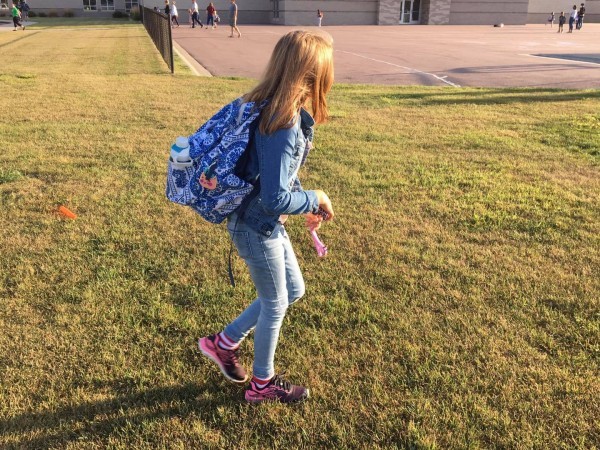 I don't typically cry on the first day of school, but today was different.

I sent my girl off to a brand new school teeming with strangers wearing masks, in the uncharted territory of back-to-school during a pandemic.

It's true that for the past few weeks, I've been ready.

But not without questioning my choice — and myself.

I've wondered what kind of mother I am to send my kid off to a brand new school during a pandemic.

I've worried that maybe the whole thing will just be too much for my girl, though based on who I know her to be, it's not.

I've considered all kinds of worst-case-scenarios, subsequently blaming myself for each hypothetical one.

But overall, I've been comfortable with my decision during a time in which none of the choices seem good enough.

Nonetheless, the weeks — maybe months — of anxiety and wondering and worry poured from the corners of my eyes as I stepped back and watched my girl brave this new world.

I let her go and my emotions considered that their cue to do the same.

And I realized the tears weren't so much about her, but rather me.

She's ready for this.

And while I thought I was too, it turns out it's just going to take me another minute to get there.

Because no matter the circumstances — no matter how much physically or mentally prepared I feel — my heart is never prepared for her to grow another year older. Especially during a year when we're basically all preparing for the worst.

But I can't carry the weight of every worst-case-scenario any longer. My shoulders have been bearing it for too long.

And today, the tears felt cleansing as the weight began to drift away. Because even though I don't know what this school year holds, I know that I love my kid and I truly trust God that she's going to be okay. Even though I wanted to stand there with her on that playground forever and ever.

As I watched my girl doing what she does best — socializing and learning — I decided that a mom who sends her kid to a new school during a pandemic is a good mom.

Not a perfect one. Not one with all the answers. Not one who won't screw up or make mistakes.

But a good one.

And the look on her face when her nervously searching eyes picked me out of the crowd of parents after school?

Well, that just confirmed it.

Pig Tails and Puke Fests: Will I Ever Sleep Soundly Again?
Why I Let my Kindergartner Dress Herself for Picture Day
They Say All You Need to Know, You Learn in Kindergarten. Could that be True in Parenting, too?
advertisement

Pig Tails and Puke Fests: Will I Ever Sleep Soundly Again?
Why I Let my Kindergartner Dress Herself for Picture Day
They Say All You Need to Know, You Learn in Kindergarten. Could that be True in Parenting, too?