My Father's Death and the Legacy of Kindness

A month ago, I had the great pleasure of accompanying Jack’s class on a field trip to the Chrysler Museum. As we were passing through Huber Court, Jack caught sight of my parents’ names etched in the marble wall and stopped mid-stride. Oblivious to the boisterous chatter of his classmates fading into the glass gallery down the hall, Jack stood immobile. And then he slowly reached out his hand. 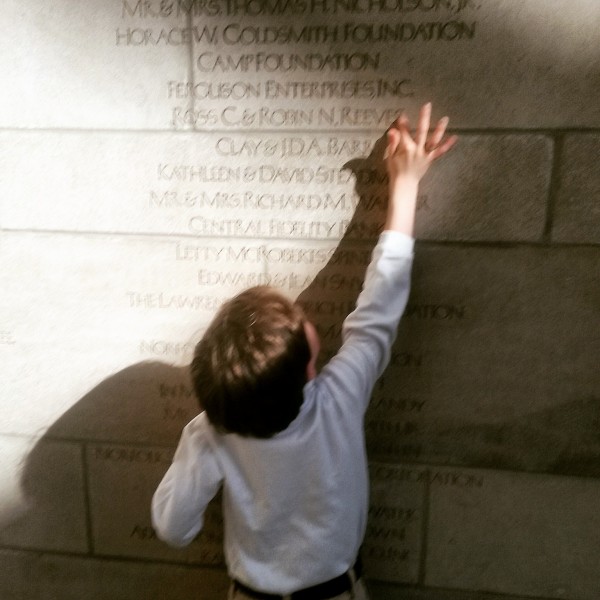 Silently I watched him run his fingers over the grooves in the marble, painstakingly tracing each letter in my father’s name. I knew what he was doing. He was willing himself to see and feel my father instead of just a name carved in the cold marble.

I know this because I have done it too.

“Why are their names here?” he asked finally, his hand still on the marble, unwilling to let go of the tactile connection to my father.

There is an easy answer of course. But Jack has never wanted the easy answer to anything. So instead I told him that my parents have always been ardent supporters of the museum. That one of the greatest legacies my father left me was the belief that when you give your time and money and support to the people and places that make the world a more vibrant place, you change the world. Not the Big Wide World necessarily, but world with a lowercase w. Your community.

Long after the boys left, I stood in front of the wall and thought about the idea of legacy. The traditional vestiges of a person’s legacy are tangible – monuments, statues, names printed in a textbook or carved into a wall. Things that remain long after a person is gone. And it is true that in 100 years from now, my parents’ names will still be carved into that wall. But it is equally true that 100 years from now, when another class on another field trip walks by that wall, no one will trace their fingers across the cool marble, feeling the indentation of the letters as though they were reading Braille.

Maybe the more important legacies are the ones that you can’t see.

Last week, Jack broke down at bedtime. He curled up around me in his bed, his body wracked with sobs as he told me how much he missed my dad.

He looked up at me, eyes red and puffy, and said in a quiet voice “It’s hard to be so little and lose so much.”

I wanted to tell him that it is hard to be so big and lose so much too. That when you are big, grief can be lonely. When everyone else’s world rightly moves on but yours does not. When the people to whom you would normally turn for comfort are knee-deep in their own hurt. When you wear the titles of mom and daughter and sister and wife but what you really just want to be is that little girl who could crawl into her dad’s lap until the blur sorts itself out into colors and shapes once more.

But I didn’t say any of those things. The hardest times as a parent are the moments when you have to stifle the urge to share because what you really need to do is just listen. I kissed his forehead, hot and salty from where the tears had inexplicably migrated upward, and simply said “I know.”

And with those two words, all the rage and confusion and sorrow that had been boiling in his little body burst out all at one time as he shouted “I want to die so I can go to heaven right now and see him.”

It’s hard to be so little and lose so much.

His body relaxed against mine. “I don’t know how to change the world.”

I told him what my parents always told me. “You already are.”

There are people whose deeds, big and bold, are writ large across history. Those kind of changes are important. Those people are the ones to whom monuments are built and books are written. But equally important are the small acts of love and kindness and generosity that change the world one person at a time, one moment at a time.

Some people want their children to grow up and be doctors or lawyers or president. But if I’m playing my cards right, I’m raising my boys to grow up to be good husbands, good fathers, good people. People, like my dad, who change the world without even realizing they’re doing it.

I will continue to go the museum and I will always trace my fingers over my dad’s name. But I know that his legacy is far greater than what a piece of marble could ever show.

Cameron Reeves Poynter is a recovering lawyer, a mother of two boys by luck, and a rabid sports fan. She writes about love, loss, and UVA basketball at luckyorangepants.com.