My husband Joe is a Forever Father.

Perhaps you are wondering what this means — how a Forever Father is different from any other father.

For starters, there is another world inside of him that few are aware of, or understand.

The Forever Father will do this forever.

Forever is big. It takes up a lot of space.

You would never know.

He doesn’t talk about it.

He goes about his day. He buys coffee for the office and he answers calls and he makes decisions.

But when he climbs back into his car in the early evening light, he rests his head on the steering wheel for a moment. He thinks about his son.

He wonders what will become of this tall boy, whose body is racing ahead of his mind and his spirit.

Dad. For me. I will be seventeen. This year.

A Forever Father goes about the whole autism business very differently than, say, the Forever Mother.

He pushes, while she soothes.

He glances at the research, while she devours articles and blogs and reports.

Both love him fiercely.

The Forever Mother’s love is feral, and wild. It is the rush of the wind, and the crash of the ocean.

The Forever Father’s fierceness is hot-bright-orange like the sun. It warms the earth, and scorches the doubt. It is certain, and true.

He is a teacher.

He teaches his mysterious son about taxes, and budgets, and constellations across the night sky.

Every once in a while, he looks at his boy, and for one single second he remembers how he once hoped for catch in the yard, or fishing on a boat.

And exactly one second later, he moves on, and forward.

He compartmentalizes, is what I am trying to say. He does not dwell on what may have been.

When it comes to autism, this father doesn’t think about why.

To him, these questions are like stretching his fingertips too close to a burning flame. He knows he’ll likely walk away with his heart on fire.

Instead, he asks himself questions that begin with who, and what.

Who can this boy become?

What will it take to get him there?

He considers these questions, and then he gets to work.

He shows him how to grip a fork, and give a firm handshake.

He explains how to look both ways before crossing a street, and why you don’t tell strangers where you live.

He talks to him about politics. He reminds him to always have a flashlight handy in case you lose power. He holds the strand of Christmas lights and helps him gently untangles them.

This Forever Father, he is scared.

When his tall son reaches for his hand and holds on tightly, he doesn’t care who stares.

The Forever Mother lives this autism life outside of herself. She asks questions. She seeks advice. She longs to connect with others who walk a similar path.

Her grief is loud, and messy. It fills the room with color.

A Forever Father digs deeply inward. His grief is quiet, and private. He allows himself to visit it only after his family is long asleep. He rubs his dog absently, while his mind races from one idea to another, before landing on one single mantra.

I’ll never let anyone hurt him.

Underneath the goals and the lessons lies this single mantra. It the vibration of this man’s heart—the undercurrent beneath his ribcage.

No one will ever hurt his boy.

If you come across a Forever Father, be gentle.

He is fighting a tender battle.

He will not fail.

He will not let himself fail.

And if you are walking through a park or down the street and you see a dark-haired man holding his teenager’s hand, remember.

He isn’t just holding a hand. He is holding his whole entire heart, right out in the open.

There are no shortcuts.

He only has one chance to raise his son.

The boy he will forever teach to look up, and wonder. 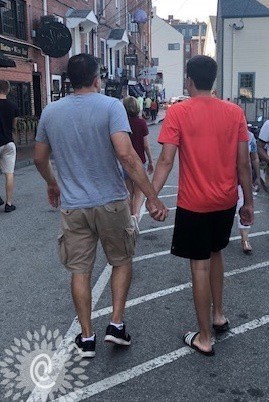 What is Autism?
This Boy Jack
A Very Big Table for Autism
advertisement

What is Autism?
This Boy Jack
A Very Big Table for Autism