Mean Girls Grow Up To Be Mean Moms

Published by Keeper of The Fruit Loops on September 8, 2015 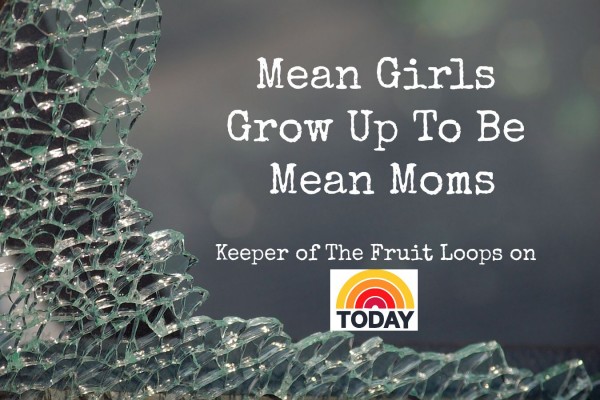 As you walk into the cafeteria, your stomach lurches a little. You look around at the groups of girls and a familiar fear fills your stomach.

“Will the cool girls let me sit with them today?”

You scan the room and see girls chatting, laughing and looking over at you as you walk in the room. Your insecurities try to get the best of you, you instantly start to feel your pulse rise, your nerves in high gear.

“Are they talking about me?”

You approach a group and they look up, after having paused their conversation, and they smile but you can’t tell if they are genuine smiles.

They say yes and as you sit down, they return to their conversation.

“Did you HEAR about what she did?”

“I mean, I would NEVER have done that….she has such nerve!”

Well, at least they aren’t talking about you. For now, anyway.

As you sit there, listening, inwardly wincing, you realize, high school isn’t a distant memory. Sitting in that cafeteria, surrounded by moms at a PTA meeting, you realize, women never change.

I’ve written about Mom Bullies in the past. I’ve written about how hard it is to be a mom in a culture of one upping, overachieving moms and the constant pressure to be busy, to be perfect. I’ve written about laying down our swords and just being kind to each other. With every post, moms from around the interwebs would respond in a battle cry of support, relaying their own stories of hurt and shame at the hands of another Mom Bully. So many statements of “Me, too!” and “I’m glad I’m not alone!”. So much hurt in our day to day lives, so much UNNECESSARY hurt.

I am here to say, AGAIN, to the mom who feels bullied: YOU ARE NOT ALONE.

Because it’s happened to me, too.

Recently, I found out that I was the victim of an acid tongued Mom Bully. She spread vitriol laced gossip about me to anyone who would listen and, though she’s entitled to her opinion, when the words got back to my ears, I was crushed.

And angry. Not just at her but at us moms collectively.

Why do we keep tolerating this amongst ourselves?

Why do we ALLOW the Mom Bullies to continue their reign?

I’ll tell you why: because it’s not just the Mom Bully’s fault. Her words can’t hurt without help, without support from a cast of characters who surround her. The Mom Bully has accomplices, all just as guilty, who add to the problem, to the hurt, to the pain that vicious words can inflict.

We are all guilty.

Let’s look at the guilty parties, shall we?

The Speaker: She’s the bonafide Mom Bully. The spewer of hate and hurt. The one who thinks she’s above reproach, who doesn’t realize her words can crush with a single blow.

The Spreaders: They are the relayers of the gossip, the ones who spread the vitriol. They play Whisper Down The Lane with someone’s feelings under the guise of keeping people informed. But, you “never heard it from them”, right?

The Accepters: These gals just accept what’s being said without considering the source. Without asking questions about the validity of the rumors. The “Well, If Someone Said It, It Must Be True” Girls.

So, which one are you? Are you a Spreader, an Accepter or an Allower? Or, are you The Speaker?

I won’t make you answer out loud but I know I’m guilty as charged. I’ve probably, shamefully, played every role in some way or another.

There’s one party who is missing from the list, however. One player who is noticeably absent from any Mom Bully situation. In fact, I’ve rarely come across one in real life and I’ve often not been brave enough to assume the role. She’s an urban legend, often less seen than the Loch Ness Monster or Sasquatch. She’s a rare gem, a brave soul who is willing to go to bat for her friends and for moms alike.

The woman who says, “Stop it. I won’t listen to this any longer”.

The woman who looks the Mom Bully in the eye and says, “You’ve got it wrong. She’s my friend and I won’t have you say horrible things about her.”

The woman who realizes that words hurt, and at the end of the day, we are all just moms trying to do the very best we can.

The woman who says, “Hey, sit by me” and says it kindly, with no pretense.

The woman who refuses to keep the peace and just be nice for the sake of harmony.

The woman who is willing to stand up to a Mom Bully and say, “You are wrong. You are hurtful. You can no longer be in my space.”

The woman who sees the good intention of every mother, sees the kindness that moms inherently hold within their hearts.

The woman who cries ENOUGH when she hears of another mother being cut, ripped, torn or shredded.

The woman who gently helps the broken, shredded woman get back on her feet with kind words, gestures and actions.

Defenders. We need more Defenders in our ranks.

Bullying is Handed Down From One Generation to the Next
Why I Bully your Kid: An Inside Look at Bullies
Bullying Prevention Starts at Home
advertisement

Bullying is Handed Down From One Generation to the Next
Why I Bully your Kid: An Inside Look at Bullies
Bullying Prevention Starts at Home