Mean Boys Are Just As Bad

There is this kid – a normal everyday kid who loves Legos and reading Diary of A Wimpy Kid, and Star Wars. He likes to play basketball and walk his dogs, and he says his prayers every night. He loves Elvis and the Beatles and sings them both, loudly and a little bit off key. He is described by everyone who knows him as a nice kid. A happy kid. He comes from a nice family. He eats dinner with his whole family every night, and has since he was born. He loves to snuggle up in the bed with his Mom to read even though he’s 10 now. He is well loved. But before he goes to bed, he talks to his Mom as she tucks him in, he whispers his quiet questions. “Mom, why are the kids mean to me? What did I do to them? I try to be nice, but they still are mean.” 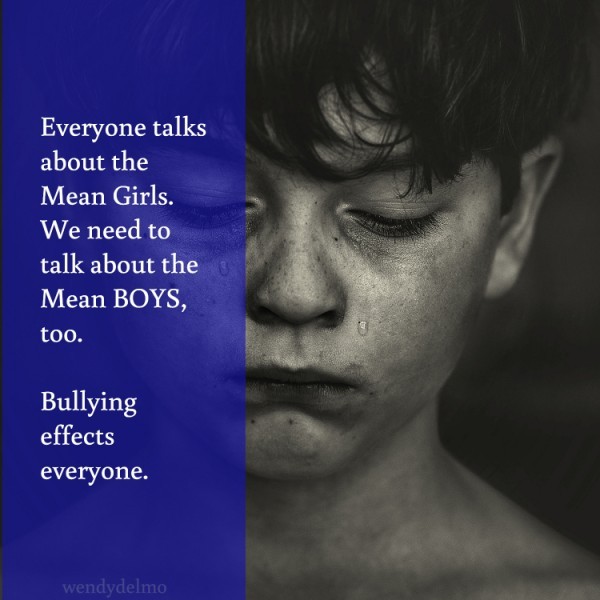 What’s mean to a 4th grader?

It’s being told that you can’t sit with the rest of the boys- to go sit with the girls. It’s being told that you can’t play 4 square, or that the things you like are dumb, or overhearing one boy tell the others, “Don’t play with him- he’s jerk”. It’s being accused of stealing something from a bus mate, and having the entire bus gang up on you, accusing you even when you know you didn’t do it, and having the courage to call the accuser to straighten things out and never getting a return phone call. It’s never being cleared in public when the accuser admitted it was someone else. It’s being caught by a crafty and clever bully who knows how to get his meanness out in line in the hallway, in whispers just where the teacher can’t hear, it’s hate letters being left on your desk. It’s being called fat, over and over, even though you are not, your doctor says your not, but it’s still causing very real body image issues. It’s having people accept invitations to your birthday party and then not showing up. Some would say these are “little” things, but they are immense to a young boy. It’s a little bit of your heart breaking every single day, and a little bit of your self esteem and self love flaking away.

I know, because I’ve been experiencing it with my son. My lovely, adored, amazing, much prayed for son who is now wondering what is WRONG with HIM. I’m not the type of Mom who insists that my kids are perfect, I know better. My son can be headstrong and loud, likes to get his way, he sneaks curse words, and I am sure he gives back exactly what he gets. He’s mostly a good kid, not perfect, but a good guy. Most of all, just wants to be included. He wants to be part of something. He wants, most of all, “a good friend, a REAL good friend who I can talk to, and trust, and to be there for me”

Yes, son, that’s what we all want. it doesn’t change when you’re grown up.

In an effort to combat this stuff going on I’ve been in contact with his teacher, many times. To her credit, she’s “taken care of it”: a few time- apparently there is a conflict resolution form that these young boys are to fill out and adhere to.

Ahem. A form. For 10 year old boys. They’ve filled this form a few times. Does it seems as if it worked?

Last Thursday he told me about a situation that bothered him that yet again occurred with this same boy. After hearing about the whole thing, I asked him if he had told the teacher. He said “No, why bother? It’ will not make any difference”. When I questioned him, he said, “Mom, I HAVE told . I did exactly what I was supposed to do. And we have to fill out a form and are told “to get along” and to stop being mean to each other. It might stop for a week or so, then it starts again. And it seems like I’m annoying my teacher and it just make it harder for me. So I’m just going to have to deal with it”

10 years old, and already giving up.

As I choked down tears I told him he does NOT have to deal with it, that I would help him. I wrote to the teacher, she called me back, apparently she sees him playing with a different group of boys, and there is “no evidence of bullying”. Really? Can we discuss the anonymous note left on his desk with his name on the front and in the inside, neatly written, “I hate you”? hmm…that’s not much bullying, is it? It may not have been a big deal to you, but it sure as hell was to my son. That should have been a big, huge deal. Not just an offhand , whoever did this better cut it out!

I was told that the counselor was supposed to come into the classroom and have a discussion. It was supposed to happen yesterday, and it didn’t. Giving it the benefit of a doubt, I left a message to follow up on the email I sent asking to be called and told how it was going to be handled. Next, I will be at the school. Because IGNORING things like this isn’t going to make it go away. Making my son feel insignificant and bothersome because he is asking for help is not going to be tolerated.

I can guarantee you this. If I were to ever receive a phone call from school saying that my son was being mean to another child. I would be sure to handle it swiftly and properly. Being mean is NOT tolerated in our family. Being a tolerant, kind, giving person is what I’m trying to teach my children to be. I want them to be the type of kids who stand up for what they believe in. To treat people as they would want to be treated.

Is this how it begins? One small boy being beaten down day by day, word by word, one mean thing, one exclusion, one thing at a time, teaching a child to think no one cares, that he is powerless? My son believes in me. He knows that his parents will step up and try and help, and you can be assured I will! But how many other kids are not helped? How many just tuck all that hurt and pain and rage into themselves and smile and laugh and go about their days pretending that it’s all ok? Until their their rage and self-hatred boils up and erupts? THEN they get attention! Why are we failing these kids when we should be helping them?

*edited to say that when we simply could not get an acceptable answer to help our son in school, we withdrew him and now home school. He's happy, healthy, vibrant, smart and have tons of friends who include him, both boys and girls.

Not just Mean Girls- There are Mean Boys, Too.
The most important part of the kindergarten curriculum
How My Son’s 2nd Grade Teacher Made Me A Better High School Teacher
advertisement

Not just Mean Girls- There are Mean Boys, Too.
The most important part of the kindergarten curriculum
How My Son’s 2nd Grade Teacher Made Me A Better High School Teacher