Published by Samantha Kemp-Jackson on December 27, 2015 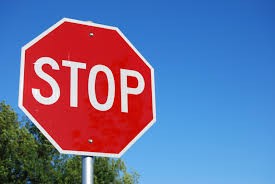 You read that heading right.

“Stop what?” you may be thinking. Isn’t that an incomplete sentence?

It is. But I stand by it nonetheless.

Stop, you think? She must be crazy. Isn’t the new year a time to go, to move forward to press ahead with a resolve that will result in good things all around? So many resolutions are about starting something: it goes along with the idea of a new year, a clean slate and a fresh start. “Start” being the operative word.

Stopping sounds counter-intuitive, doesn’t it? At first listen, there is an air of negativity to the verb. Stopping often means ending something that’s not good: stopping smoking, stopping over-eating, stopping any range of bad habits.

Yet putting a stop to something can be surprisingly positive. Let me explain.

In the coming year, I resolve to stop doing so many things that are detrimental to not only myself but to my kids as well.

In 2016, I will STOP doing the following five things:

What will you stop in the coming year?