How to Raise a Real Man 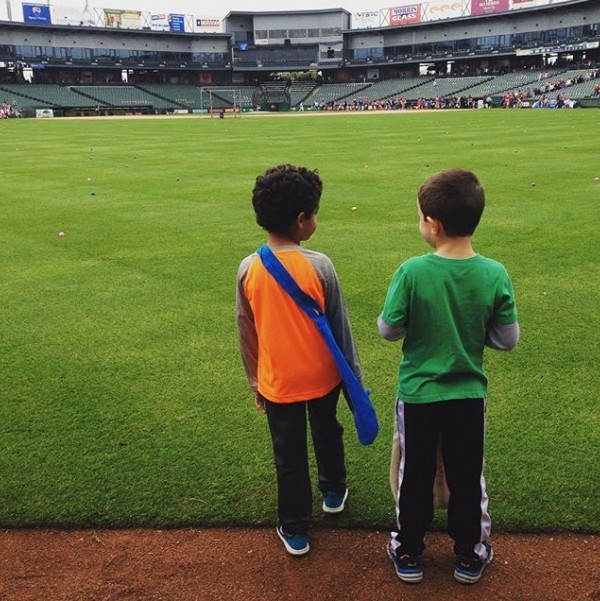 My son just finished kindergarten, and now he reads everything he can, including the headlines on ESPN when we're out to eat at one of his favorite burger places.

I thought ahead, trying to figure out how to make this news both appropriate and impactful to my son. Even though I am a survivor of rape, I have a hard time saying the word; and it wasn't a word I wanted to throw at my little boy to process at his age.

It's a heavy responsibility, raising a good human. Sometimes, even our best efforts fall flat and we can't control everything they do. We can, however, set up a strong foundation; I want his foundation of growing into a man to include the understanding that violence isn't the appropriate response and we don't touch others' bodies who do not wish to be touched.

"The coach knew that some of his players were hurting women, and he didn't do anything to stop it or do the right thing to tell someone," I told my son. "As a leader, it is his responsibility to report something like that to the proper authorities — like the police. And his players, basically, didn't stop when someone told them to stop."

Even my little boy knows what this means. We have discussed at length that his private parts are his alone, and that he is in control of his body; for example, he knows I will never make him hug anyone unless he wants to. He also understands that no means no — both when it comes to me and when it comes to his own body.

We went on to talk briefly about what it means to be a good leader, a good coach, a good man.

I had just emerged from three days of self-imposed unplugged silence to read the verdict for the Stanford rapist. These are the subheads that ran through my mind:

Another college campus, another sexual assault.

He's white and an athlete; who will believe her? Who will side with him?

I can only imagine what she went through to go through this trial.

This is why I never reported my rape.

And the thought that kept ringing through my head... At least he got 6 months. At least one of them is going to face some semblance of consequences for what he did.

According to RAINN (Rape, Abuse, and Incest National Network), America's largest anti-sexual violence organization, more than 60 percent of rapes go unreported. But truly, let's think about that. How can any organization possibly estimate those which are never reported?

The first time I heard the word "rape" was when a teenage girl a few years older than I was assaulted near my neighborhood. It wasn't something anyone talked about aside from whispers behind furtive hands. It wasn't until I was much older — recently, in fact, and I am in my 40s — that I started hearing accounts from women I know and love about the acts of violence against them.

As for me, my rapist was a friend... Or so I thought when I went to his dorm room that night. STOP, I said, clearly. NO. I know you want this, baby, he said. NO, I said again. I don't want this. He didn't care. I left his room in a daze, went straight to my shower in my dorm, and scrubbed my skin raw.

The next day, I pretended it never happened and I ignored his smirk when I saw him in our group of friends. I burned inside when I discovered that he had been bragging that he had bagged me and my best friend. Who was going to believe my story? He was someone I hung out with regularly. We were alone in that dorm room, with no witnesses. And everyone knew that I ran with a crowd of wild musicians, even though I wasn't a wild one myself. In any case, I was in too much shock to tell a soul. And I knew, in my heart, that if I did, all I would get is a dragging through the mud.

Twenty years later, when Congressman Todd Aiken blithely tossed out the phrase "legitimate rape" and all of my anger came to the surface. I finally told someone: my husband. I shook and cried in his arms and let the waves of pain and humiliation wash over me. It was too late for justice for me, and I know he is out there somewhere, making money as a musician with a touring band and never faced one day of punishment, let alone the six months Turner was sentenced to serve.

I can't go back, even if I wanted to. My choice was to stay silent, and that cost me a lot of time and pain that devoured me from the inside out, and I didn't realize it until decades after it happened.

So, Brock Turner, I'm teaching my son to be as different from you as possible. Your "twenty minutes of action" as your father so coarsely put it, may cost you a lot. But it will never cost you as much as it cost her, and you may never understand that. For every day that you serve in jail, I will take the satisfaction that you are paying for the crime you committed and that you were convicted of in a court of law. You represent every rapist who was never reported. The two men who stopped you represent the kind of man I will raise, because men like you must be stopped.

I will explain to my son what it means to say no and stop, not just in words but in actions. I won't have to tell him that you don't rape an unconscious woman, because it will be obvious in the way he learns to respect women. My son will be taught about equality and later, rape culture and privilege. I'll show him your story and your victim's statement, and I'll be honest with him about what I have been through, when he is old enough to handle it. And then I will explain to him about these two heroes from Sweden who weren't afraid to step in on behalf of a stranger, a woman splayed unmoving on the ground as a young man assaults her.

I will teach him to be a real man.

Kristin Shaw is a writer, mother, and wife based in Austin, Texas. Her work has been published at The Washington Post, The Huffington Post, Women's Day, Cosmopolitan, Good Housekeeping, and the Today Show Parenting site, among others. Find her at Firewheelcommunications.com online or @firewheelcomm on Twitter.