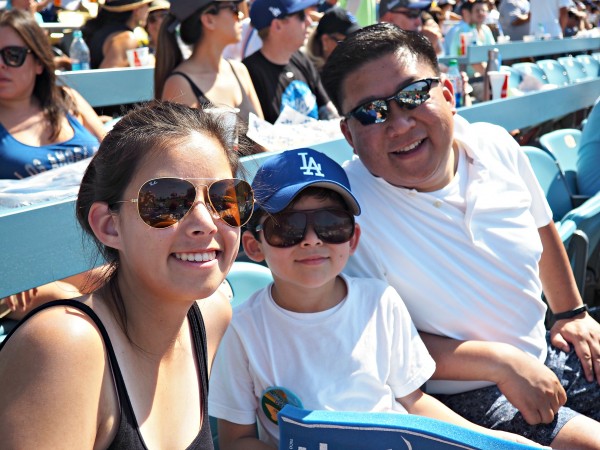 Yankees. Red Sox. Cubs. Dodgers. If your family is going to go to a game during the best season they’ve had in years, you do it up right so you can soak in the entire experience. This weekend we were very lucky to be able to do just that.

Thanks to a little bit of serendipity my husband was given some baseline tickets to last weekend’s Dodger’s vs. Padre’s afternoon game. Three rows off the field, access pass to one of the private club rooms, and priority parking, it was the perfect game for our entire family to attend, and as first time attendees my son Jackson and I were stoked. Last year in California, first game, we wanted to make the most of it.

But how do you make the most of something when you’ve never been? Every stadium for each team is a little varied. They have similar pulls: food, merchandise, fan-fun games during the innings. But what makes each team the same is also where the differences lie. What can you do to ensure your visit to the ball park-or any sporting event for that matter-is a home-run? 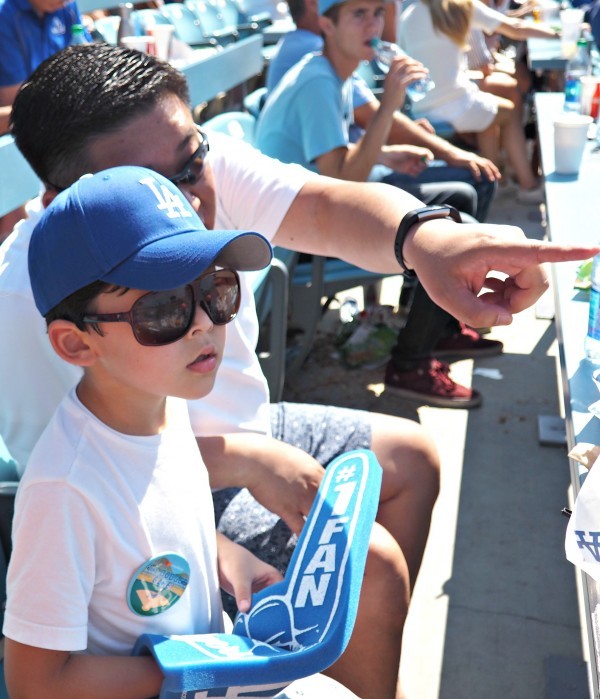 1.) Talk to the ticket-holders. Chances are you’re already friends with people who attend games regularly. Football, baseball, basketball-it really doesn’t make a difference. You see their pictures on Facebook, Instagram. You hear them talk excitedly about the upcoming games. These are the people you can count on for solid advice and we lucked out a little more since we spent time with several big Dodger’s fans yesterday. Chatting with the parents of one of Jackson’s friends it became clear if we hadn’t asked we would have missed out on some opportunities to better our visit. Insiders always have the best suggestions-they have the inside scoop-and we’re appreciative that we received several good ones. Most stadiums have special treats for first time attendees and for Jackson in particular, that was a huge thrill. See the pin on his shirt? Thanks Stu and Stephanie! 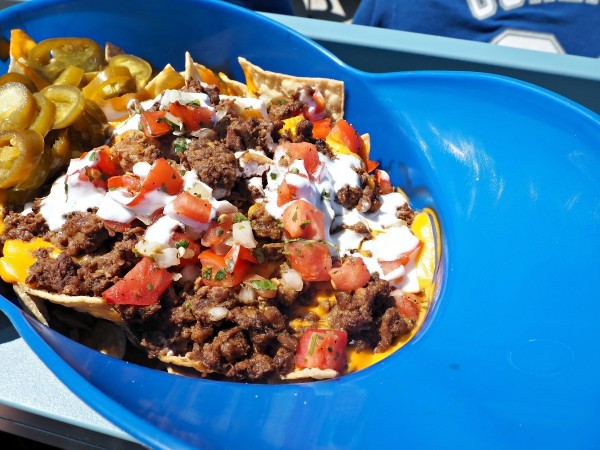 2.) Visit the different levels and try all the suggested (outrageous) snacks. As we learned, depending on what level of the stadium you’re on the food varies. And isn’t part of the fun in going to these venues eating yourself silly? At Dodger Stadium it’s almost a rite of passage to eat a Dodger Dog on your first visit, but they also have potent garlic fries, chili cheese tots, and a plastic Dodger’s helmet that is filled with carne asada nachos. Hello there gorgeous! We barely scraped the surface on the helmet of tastiness but we tried. Try the churros and soft serve (it’s such a delight!), drink LOTS of water, wander the levels as a means to escape the heat/sun and let your little one’s walk around, and if you’re a Club member take advantage and enjoy the indulgent meals and drinks. Bonus Tip: If you’re sitting in specialty seating like we were, get to know your server, learn their name, and be nice to them. They’re running around in hot weather trying to accommodate everyone and food/drink delivery takes time. This goes for wherever you may be seated. Be kind to the people carrying food and drinks during the games. It can’t be an easy job and they’re doing their best. Be patient. It’ll make your visit all the more enjoyable. Thank you Wendy for being such a gracious server! 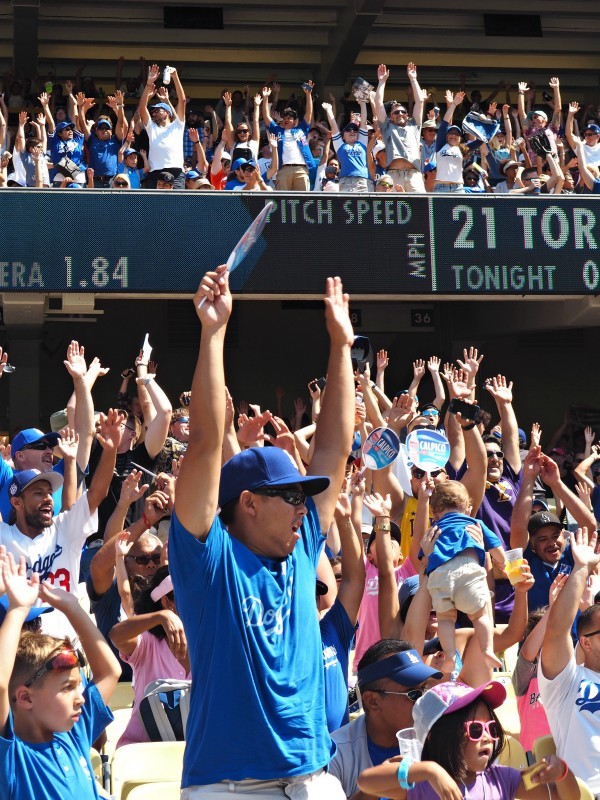 3.) If it’s an outdoor event wear sunscreen, bring sunglasses, and wear a hat. Join in the fan fun! The weather was definitely better this weekend than it has been prior. Even so, that sun was a spotlight and it was very warm. I’m surprised my face didn’t completely melt off! By the 5th inning Jackson and I were among the masses and on a mission: to get some hats for a little protection. We checked a few vendors and as we were earlier tipped off by our friends, the children’s hats were only $10 this weekend. As many of y’all know, any gear at a sporting event is going to be a little costly so a ten dollar hat? SCORE. We both returned wearing a bit of personal shade just in time to get in on The Wave. I don’t remember the last time I participated in one but goodness did we ever get in on that action. It went around the stadium several times and the children loved being a part of it. 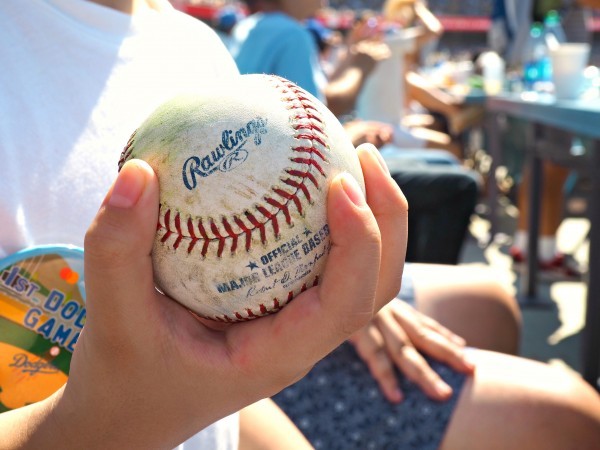 4.) Pick up some merchandise, and if you’re lucky, a priceless souvenir. Needless to say, when Jackson and I returned with our hats my husband and daughter wanted in on the action. They had to wait for the end of the game, but since we were all celebrating another win (Let’s Go Dodgers!) they were fine with that. What made the end of the game particularly precious, though, was the moment ball girl Emily presented my son with a game ball. He was ELATED. We had hoped for something like this to happen, had been told you have to move fast to get them from other eager fans, but this young lady was incredibly sweet, leaning over the partition to hand Jackson his first Dodger’s ball. It was the cherry on top to an amazing day and from the bottom of our hearts we thank everyone who helped to make it possible.

Now that you’ve heard our simple tips to making your ball park experience all it can be, what are yours? Share away and we can all have a grand slam of a time! 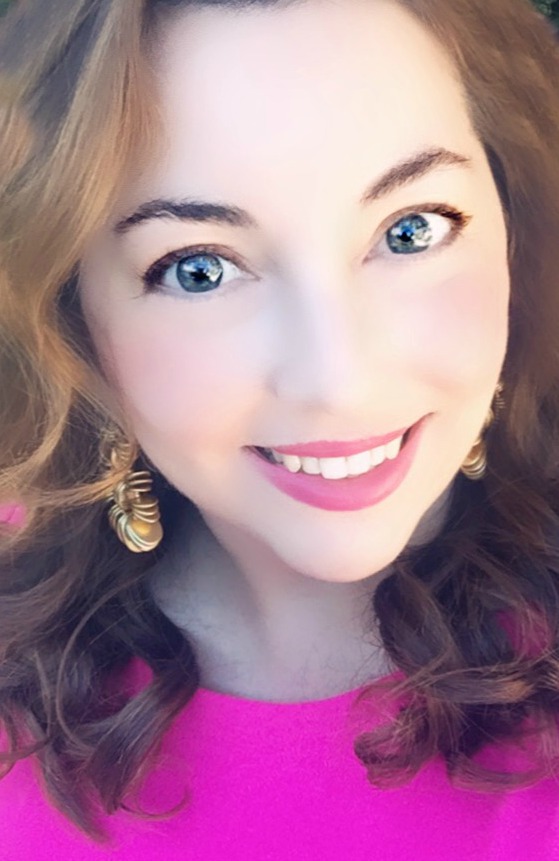 Elizabeth has been lucky to travel and live around the globe with her family of four, but no matter where they are their ties to the South follow. Born and raised in rich, varied locations like the Mississippi Delta, New Orleans, Oxford, and Charlotte, their heritage finds it's place in every new port of call. They’re celebrating their last year in Southern California as they transition back to Japan and hope you'll enjoy this new part of their journey as they go through our day to day, sharing recipes, traditions, travels, home decor ideas, and family anecdotes.

Eat. Sleep. Baseball. Repeat.
My Son's Dad, Our Team Captain
'I made the wrong choice': My son caught a foul ball and I made him give it back
advertisement

Eat. Sleep. Baseball. Repeat.
My Son's Dad, Our Team Captain
'I made the wrong choice': My son caught a foul ball and I made him give it back