How One School System Took a Stand and Saved Valentine's Day

Published by Rhiannon Giles on February 20, 2017 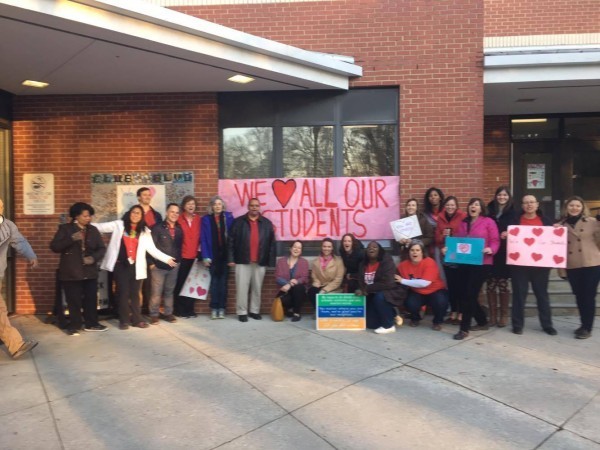 Valentine's day, with a school-aged kid, is basically a test of patience. There is the torture of watching a younger elementary school child try to write out 25 cards, the drama and hurt feelings, the sheer mass of candy, and the logistics of trying to find a babysitter for a date night in an over-crowded restaurant (or just choosing to ignore the romantic aspects completely).

This year, I had a major case of the grumps as I walked my daughter, Lorelei, into her Durham, NC elementary school. Ok, all right, I always have a major case of the grumps at 7:30 am. I had done my best to get into the spirit, with my rainbow arm warmers and pink shirt. Lorelei had her bag of carefully written cards -- written in pen and with the heart of a true anxious perfectionist. We had cheese sticks to contribute to the class party because I care about the people responsible for a million small candy-fueled children. Protein is really my only defense against Valentine's day.

As I hauled my pink, heart-encased child out of the car and towards the school, I saw our school mascot greeting kids at the end of the car line. Cute, I thought, that's so sweet of the school to do a little something for the kids. Walking farther down the sidewalk, I noticed one of the car line teachers wearing a cardboard sign that said, "Celebrate Diversity." I thought about our luck to attend a school where that did not strike me as unusual.

The teachers and staff had formed two lines leading into the school. They had their hands in the air (or around their coffee! Remember, 7:30 am) forming a tunnel of love for the kids to run through.

On the wall next to the front door there was a hand-painted banner that said, "We ❤ All Our Students." That is when it dawned on me that this was not just a cute Valentine's celebration. This was a statement.

Let me back up and talk about Durham 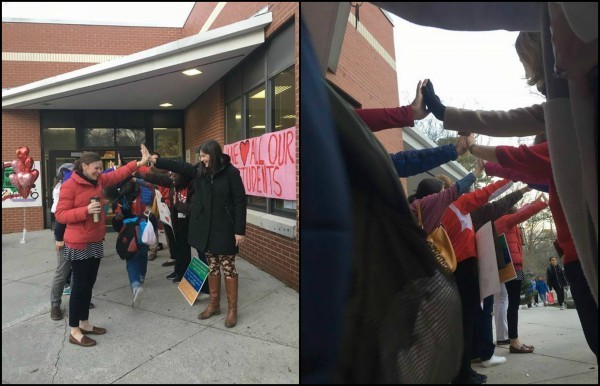 According to 2010 - 2011 data, the Durham Public School System (DPS) was made up of 52% black students and 21% Hispanic students *. 2010 census data reports that the city as a whole is 42% black and 14% latino *. Add to that the fact that Durham is an overwhelmingly liberal city -- which means a higher than average ratio of LGBTQ parents and out LGBTQ students (2nd only to Asheville in the state). 42% of kids under the age of 18 live below the poverty line.

Durham is a fantastically diverse city. Unfortunately, in the Trump era, this means a lot of very scared kids (and their families). There are large sections of the demographics who are directly targeted by both the state and national government. The rest of the kids are worried about what is going to happen to their friends.

I recently attended a PTA meeting (patting myself on the back for that! I adulted!) that was both terrifying and beautiful. The reality of what an environment hostile to these kids and their families means, the personal stories, the spoken fears -- it all gutted me. The reaction of our school staff gave me hope. They want to teach our kids. Full stop. And in order to do that, they recognize the need to make the school as safe and supportive an environment as is possible.

They do this every single day. They hold meetings with organizations that want to affect positive change and with the people responsible for making the changes. Parents and teachers march side-by-side to remind the government what counts. Every morning, by the time we walk from our car to the school at least two staff members have greeted every child by name. The administrators are not all talk, they are action. Every. Single. Day. They do this while being underpaid and expected to perform miracles in the form of standardized tests.

Despite all of this, they took the time to demonstrate true caring to each and every student.

I got back to my office and posted a little Facebook update about how sweet it was. Someone pointed me to posts about other schools that had done the same. There were Black Lives Matter signs. No Ban / No Wall signs. LGBTQ affirmations. Statements criticizing sexism and lauding peace and equality. Signs in Spanish and Arabic. All shouting the message that every kid deserves support and love. Every child is worthy.

A few days before Valentine's Day, the Durham Association of Educators posted a blog calling on the staff of schools throughout Durham county to come together to show their support for students. They tackled the idea that teachers and schools should not do anything that could be in any way construed as "political" and why that just won't fly.

Because they are taxpayer funded and governed by elected bodies, every single thing that happens in a public school is political, from funding to curriculum to decisions about leadership and structure. Avoiding discussions of controversial topics for the sake of avoiding “politics” is dishonest. Our silence supports someone’s position. So do our actions. Let’s be thoughtful, intentional, and responsible to our students, their parents, and our communities. Let’s show them love.

Show them love, they did. And they will continue doing. I have never been so proud to leave my kids in the hands of these educators.

*Yes, my source is Wikipedia. I'm writing a blog post, not a research paper.

Your Guide to Choosing Top After School Programs in Fremont, CA
Advantages of Private Schools
Want your kids to Value their Education? Show Up! Part One: Parent/Teacher Conferences
advertisement

Your Guide to Choosing Top After School Programs in Fremont, CA
Advantages of Private Schools
Want your kids to Value their Education? Show Up! Part One: Parent/Teacher Conferences