How one little note made a big difference

Last Monday was her first day at her new school.

A new school, in a new state, where she doesn't know a soul.

It was a big day to say the least.

She didn't seemed fazed by it. She wasn't nervous or scared. She wasn't unsure of herself or of the experience that awaited.

She was cool, calm, collected...excited even. She was everything I wanted to be.

As I packed her lunch that morning, I slipped in a little note with a joke hoping it would help keep up her spirits just in case she did end up having a difficult first day. I desperately wanted to make her smile and to remind her that she was loved. That little note was my secret weapon.

When I picked her up from school that afternoon, she was bright and cheery, informing me that she had made a new friend. "We played together at recess, and sat together at lunch. She liked the joke you wrote in my note too, Mom!", she said with a grin.

That was all I needed to know.

Every morning last week, I made sure to wake up early and sneak downstairs to pack her lunch before she woke up, all so I could covertly slip in a joke for her to share with her new friend. Little did I know, those notes were actually making a bigger impact than I originally planned.

Tonight as we played dolls in her room, I asked her about her week, prodding her to inform me of her daily routine at school. I really just wanted to know about lunch time. I just wanted to make sure she still had a friend to sit with, and that she wasn't alone like I imagined in my worst nightmares. 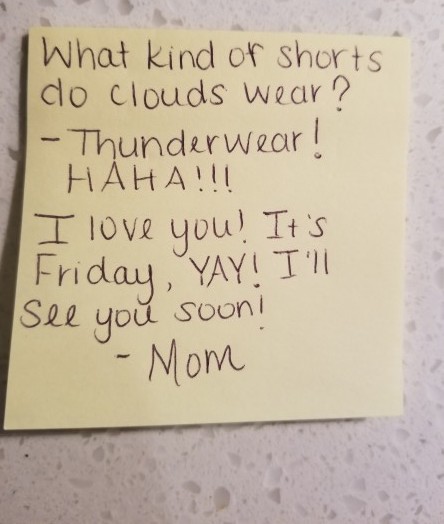 "I read your jokes out loud every day to the kids at my lunch table", she said. "They love them, Mom! They ask me every day if you left me another note. Your jokes make them laugh!"

I'm sure she thought I was an absolute nut job as tears began to fall from my eyes and I made my ugly happy/cry face.

The realization that those 2 minutes I spent each morning writing on Post-its was actually bringing joy, not only to my child, but to her classmates as well, was overwhelming for me. How could I not be teary-eyed at the thought that my small act was not only making her day, but was also giving her classmates something to look forward to? I had managed to help her more than I thought possible.

I'm not that great at this parenting gig.

I often do and say the wrong things; my fuse is short, my patience non-existent.

I worry so much, about everything, all the time. It's borderline neurotic.

But every once in awhile, I manage to strike gold. And these yellow Post-its are pure gold.

My girl is going to be just fine after all.