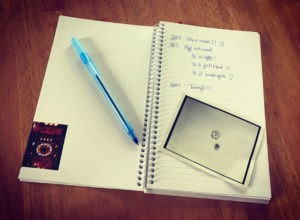 My 3 year long journey to motherhood was full of countless detours and dead ends: pain, loss, surgeries (2), IVF cycles (3), and endless needles (160). I went through all the range of emotions one can expect to feel when dealing with infertility: uncertainty, fear, isolation, determination, sadness, grief, and at times excitement, hope and joy. Of all these emotions, hope, sadness and joy best sum up my IVF experience.

Starting the IVF process was overwhelming at first. There was a mountain of paperwork, we had to educate ourselves on the daily injections we had to administer, and there was the heavy time commitment for the countless appointments, ultrasounds and blood tests. Ironically, since I was a kid I would pass out at the sight of blood and now, here I was, willing to give it away multiple times a week! The nurses knew to recline my chair so I wouldn’t pass out, and eventually, it didn’t phase me anymore, I was a pro blood giver; a vampire would have been proud.

We started the first IVF cycle on January 29, 2014. Injections started a month later, and for 17 days my husband injected me with a total of 42 medications.

The next phase in the process was egg retrieval. I remember getting up at 4am that day on March 17th, full of excitement. Finally the time was here, we were so close to the end zone. We had to be at BostonIVF at 6:30am. Once there, I changed into my ‘operating robe’, and walked into the operating room, where they laid me down and put my legs up in stirrups, kind of like the ones you see at your OB/GYN, except these were contraptions that hung from the ceiling and raised the legs up. As I laid there, spread eagle, I was put to sleep. 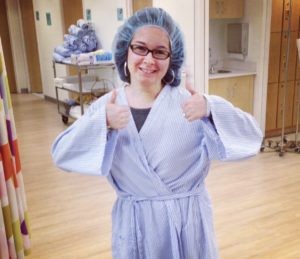 I woke up a little sore, and we were sent home. Later on, the nurse called to let us know they were able to retrieve 10 eggs, but only 4 fertilized, and out of those, only 2 were good quality embryos. We decided we would transfer both.

Three days later, on March 20th, I was sitting in the BostonIVF lobby, eagerly awaiting the moment I would be receiving my precious embryos. But first, I had to see the acupuncturist on site. Those tiny painless needles released all of my anxiety, and I came out of that session feeling relaxed and ready.

They called out my name, it was finally time for the egg transfer. This procedure was done while I was awake, my husband was with me holding my hand, and we could actually see the long probe carrying the egg into my uterus. It took all of 5 minutes, and the deed was done. I was instructed to go home and rest. A pregnancy blood test was scheduled for the following week.

That was the longest week of my life. Finally the day came, I happily gave my blood away, and later that afternoon I received the phone call that erased all of the anxiety, pain and loss of the past year. I was pregnant! 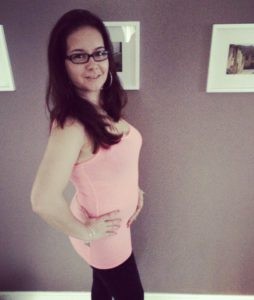 On April 22nd, we were scheduled for our first ultrasound to listen to our baby’s heartbeat. The quiet in the room was deafening, and with dread I looked on at the technician. After a moment, she broke the silence with the sweetest words one going through IVF hopes to hear “there it is, I hear a heartbeat.” I felt the tension leave my body, and let out a huge sigh of relief. They gave us our very first ultrasound pictures, and with huge smiles on our faces, my husband and I went back to the waiting room, waiting for our turn to speak to the doctor. Except she wasn’t there that day, we saw one of the nurse practitioners instead.

We walked in beaming and sat down. What happened next floored me. “I’m sorry but today’s ultrasound showed an irregular heartbeat. It’s not good. Usually a heartbeat this low means the pregnancy will not carry to term.” I thought this was a cruel practical joke. Why give us ultrasound pictures, tell us there’s a heartbeat failing to mention its irregularity, give us hope, only to take it away moments later?

I was devastated. I was in denial. I was angry. I called BostonIVF on my way back to work and practically yelled at the nurse about the way they had mishandled the ultrasound and delivery of the bad news. I went home. I would pray I thought. I would pray for the tiny heart to grow stronger. That night, I googled irregular heartbeats looking for success stories, there were some, so I held on to hope.

I was scheduled for a follow-up on April 30th. I left work for my appointment, desperately clinging on to hope. During the ultrasound, as I scanned the technician’s face looking for optimism, a hint of a smile, anything to break the heavy silence that hinted of bad news to come, it became clear hope was gone. Sadly, she confirmed my worst fear. There was no heartbeat. It was gone. I held back the tears as I sat in the lobby waiting to speak to my doctor. It’s not that I was embarrassed or ashamed to cry, I just didn’t want to dampen anyone else’s hope with my sadness.

As I sat in my doctor’s office discussing next steps, barely aware of what she was saying, I still held back my tears. She spoke about choices, sad ones. I could either choose to wait and see if my body would miscarry naturally, something that could take a long time, or I could choose surgery to make it happen. I opted for the latter, mostly because I didn’t want to be reminded of my loss every day, and especially because I didn’t want to waste time. I held back tears as I walked out of the lobby, but when I got to my car, the tears started to pour out of me. I cried all the way back to work. I cried when I got to work, sitting there at my desk, facing away from prying eyes. I couldn’t stop crying, grieving over the tiny embryo who’s heartbeat had stopped at almost 7 weeks.

I dried my tears long enough to go into my manager’s office, and as I tried to tell him I needed to go home, the tears came back. This time I was crying hysterically. I could barely talk i was so upset. That poor man looked at me alarmed, with a look on his face that said “ah crap how do I handle this one?” He must have thought I was dying, he knew I had been to the doctor’s. He kept asking me “is this something you want to talk about? Is there anything I can do?” And I just kept on crying, shaking my head and repeating “i have to go home, I can’t function today.”

2 days later, I went back to BostonIVF for my D&C (dilation & curettage) surgery. It was May 2nd. 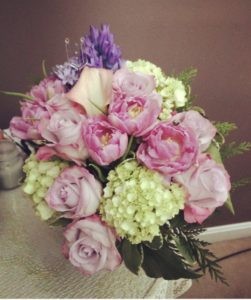 Flowers sent by my team after surgery.

I grieved in secret. The worst of it was everyone around me was getting pregnant accidentally, not even trying. Going to events was a strain, I had to put on a happy face when I was dying inside. That’s the thing about infertility and IVF, it’s so isolating. You don’t want to tell anyone besides immediate family because of situations like these when it doesn’t work and you don’t want to deal with the aftermath. Yet, you wish you could explain to friends why you aren’t yourself, and part of you wants to talk it out and cry about it some more.

The book ‘The Secret’ says one should only think and talk about positive things. The act of constantly talking and dwelling on the sad events of our lives only serve to perpetuate more sadness. In a way, it’s a good thing I couldn’t talk about it in depth with friends and family. I needed to stay focused, regroup and try again.

recurrent pregnancy loss
Our journey to Madelyn
Miscarriage, Rainbow Baby, and the Loss of my Uterus.
advertisement

recurrent pregnancy loss
Our journey to Madelyn
Miscarriage, Rainbow Baby, and the Loss of my Uterus.