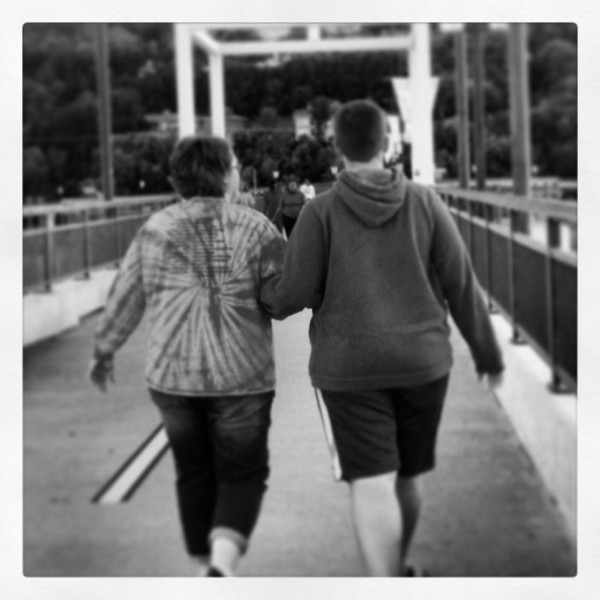 It's the start of a new year which means it's time for the bus. My son Cooper is almost 16 and he has been riding the bus for several years now, it's part of his school routine. By the very nature of who he is, he loves routine, and he loves the bus. He approaches it with a sort of enthusiasm that can be both scary and breathtaking at the same time. At the start of this year I remind myself to appreciate that fearlessness in all my children, and not yell "walk" too loudly.

The bus pulls up in front of our house everyday, well every school day, to be precise. As soon as Cooper sees it rolling up he is out the door at full speed. Off he goes...back pack on, lunchbox in hand, flailing and flapping...with a galloping, running skip he propels himself toward the bus.

I stand there watching...calling after him to "walk!"...while inwardly willing the bus driver to open the doors before he gets there....

I am sure if she does not, he will crash himself straight into them.

She does, she opens them...everyday.

Our bus driver has a son, he is a few years older than Cooper. She has walked our path and continues on ahead of us...she gets it, she understands.

Occasionally I stop for half a second and wonder if our neighbors see and what they must think of my son's "school routine". They are all very nice, so I don't think about it for too very long and typically only from the stand point of, "it probably seems unusual to them", and truthfully...it is for most.

I freely admit, it is not the usual way to approach ones bus...that is unless you are Cooper...then of course it is the only way...to start your school day.

It is totally usual and completely...normal.

I smiled and shut the door.

As I wondered back through the house in search of my coffee cup, the thoughts of Cooper still rambling around in my head...I walked past another child, on the couch staying home not feeling well...Ava.

Ava sang yesterday in front of her entire school...without music, without hesitation, without fear...

I was so impressed.

It wasn't just her singing, it was that ability to preform in front of a crowd of people.

Without hesitation, without fear.

She doesn't get it from me. I can't speak in front of crowds. It takes everything I have to type my words. In fact, I had to start taking blood pressure medicine after I started blogging...

I have to tell you that I was very hesitant about her performance. She had said she wanted to do it but had not really prepared or practiced, or really even mentioned it again until right before dress rehearsal.

I was hoping she had forgotten or changed her mind.

She was doing it.

She was running full steam for the bus, and I gently attempted to suggest she should walk, and by that I mean not do it. But her nine year old self was determined. So I tried to choke down my desire to yell "walk!", while at the same time praying someone would open the doors. Hoping she would do well and that people would clap and make her feel good about her efforts...

They did, they clapped. She walked off of that stage feeling very good about herself.

I suppose protecting our children, while instinctive and an essential part of our purpose as parents, is a necessary characteristic...

I am afraid if I am not careful, I will protect them to the point of never experiencing the joy that can be found in propelling yourself...by whatever "unusual" means...toward the bus.

If I am not careful I will protect them to the point that they miss out on the confidence and sense of accomplishment found in determining what you want to do and...doing it.

Even if it is singing by yourself, in front of the entire school.

In whatever way, shape, form, method that they use...may all of our children "run toward the bus"...and may we try not to yell "Walk!" too loudly.

Beth Clay is currently living in a small town in Arkansas with her husband, four of their five children and their dog Fatcake. She is the mother of one incredible teenage boy, born right in the middle of four girls and diagnosed with Autism at the age of 18 months. She writes about living their lives with Autism on her blog The Big "No Fanks".