Published by Kelly Suellentrop on February 29, 2016

I had my very first slumber party in 1986 when I was nine years old, to celebrate my birthday. A gaggle of pre-teens invaded my house. We all secretly sized up each other's sleeping bags as we unrolled them on the floor of my family room. Mine looked like a box of Crayola crayons, and that somehow didn't seem as cool as the Smurf or Rainbow Brite sleeping bags. But at least I wasn't the kid with the plain navy blue one. Her parents obviously didn't love her very much.

All the typical slumber party entertainment ensued. We ordered a pizza and ran to the door when it arrived, squealing, "Is the pizza guy hot? I wanna see if he's hot!" When the door opened and it was a woman, we all laughed hysterically. Because that's funny when you're nine. You expect a hot pizza guy and you get a woman. It was a scenario practically plucked from an episode of Th e Facts of Life.

I remember specifically wanting to rent scary movies, and I was totally embarrassed when my mom popped in a VHS of The Birds. Helloooooo, mother? A black and white movie? Nothing is scary in black and white. And were they serious about having a woman attacked by a seagull? Seagulls aren't even remotely terrifying. At least they could have used a crow. Crows are vicious. They wait for you to put your trash bags on the curb and then shred the bags while you're not looking, strewing your mom's monthly feminine products all over the front yard for everyone in your carpool to see. THAT'S terrifying. But this movie? Gag me with a spoon. Fortunately, my mom also rented Little Shop of Horrors. Now we're talking. Inevitably, a couple girls thought it was too scary and hung out in the kitchen with my mom. The rest of us mocked them for being sissies, then conveniently "had to go to the bathroom" when Audrey 2 ate the dentist. 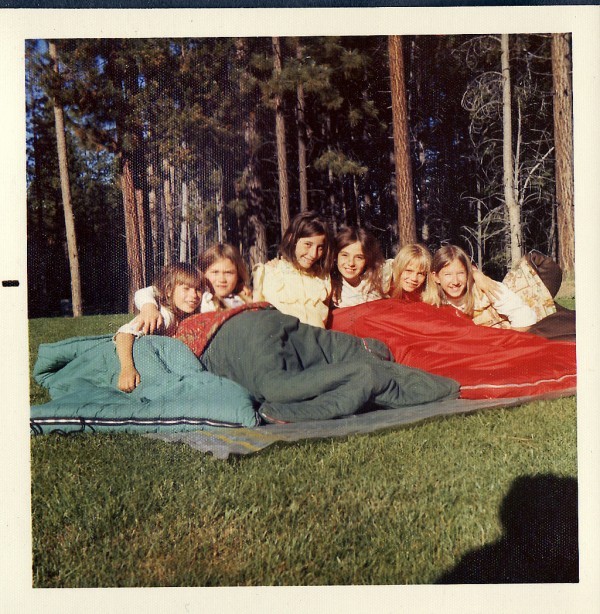 And then there was the piece de resistance of the night: The "Miss Weird Contest." My friends and I all crammed into my bathroom with a palette of every makeup color known to man and a large bottle of hairspray. We each made up our faces in grand 80's fashion, then told my mom to act as judge, crowing each girl from a list of titles we created before the contest. "Prettiest..." "Most Boring..." "Coolest..." "Hottest..." and so on, with the ultimate title being "Miss Weird." Do you know what my own mother crowned me as? "Scariest." I was totally perturbed. At the very least, my look was, "Most Psychadelic," but I really thought I had been a shoe-in for the "Miss Weird" title. The fact that being called "Miss Weird" was coveted probably says something about my state of mind at the time. What was worse, my mom named the girl I thought was "Most Boring" as the "Prettiest." Um, the girl hardly put on any makeup! She looked like a natural, dewey-faced nine-year-old. Snoozeville. The nerve.

Considering how seriously I took the outcome of the "Miss Weird Contest," it probably would have been in the best interest of everyone had someone decided to put the brakes on the ill-fated plot that occurred next. Some little jokester (probably the one with the ALF sleeping bag that said, "No problem!") had successfully smuggled in some contraband to my party: disappearing ink. She enlisted the help of a few other girls and decided it would be just hilarious to squirt the stuff all over the birthday girl. What they didn't know was that I was apparently a very late bloomer in the sense of humor department. As soon as they swiftly and deftly squirted a whole heap of ink on the front of my jammies, I immediately stopped shoveling popcorn into my mouth and flipped out.

It started with the frozen, open-mouthed glare. Then it moved on to the What did you just do? squeal of disbelief. Which morphed into the full on atomic tantrum of, "THESE ARE BRAND NEW PAJAMAS! I AM GOING TO KILL YOU GUYS! WHY ARE YOU LAUGHING? YOU RUINED MY BRAND NEW PAJAMAS!"

A few girls stood near me, completely horrified, though it was not clear whether it was at the act of pajama defamation or at my Nellie Oleson-level outburst. The others giggled uncontrollably and confessed, "Gotcha!!!! It's DISAPPEARING ink!" Oh. Like that was supposed to make it okay. Well, I'd show them. It was my party, and I was going to cry if I wanted to.

"That's not funny guys! These are brand new pajamas! If this doesn't come out, I'm totally gonna be mad!"

"Um, it's DISAPPEARING ink. It's supposed to come out. That's the whole point."

"I'm just saying. You don't know. What if it doesn't? If you ruin these pajamas,...they are BRAND new! Guys, it's totally NOT coming out! It's still there. I can't believe you ruined my pajamas! It wasn't funny!"

I stormed off, mourning the potential demise of a pair of what were apparently the most valuable pajamas in all of the Midwest. I had two minions in tow, who likely only took my side because they were afraid they would otherwise be cut off from the cookie cake.

I had been punked, and I couldn't handle it. There is nothing worse than someone who can't take an innocent joke. And in case you were wondering, my brand new pajamas made it out unscathed. The dollar store disappearing ink did actually make good on its promise - and disappeared. Unfortunately, my scorched pride didn't...at least not until I started opening presents and got my first pair of dangling earrings for my newly pierced ears. I couldn't wait to wear one of them. Not both. Just one. Because that's how Madonna did it.

Nowadays, I'm the mom in the slumber party scenario. And while a few things have changed in the sleepover game, the basic tenets of food, movies, and jokes seem to still be a constant. As my daughter gears up to have some friends spend the night, I am tempted to do a mandatory bag search and have a backup pair of pajamas on hand. Because God certainly remembers that little dramatic meltdown I had over nothing so many years ago. And I can attest that He is a vengeful God, for my little girl can NOT take a joke with the best of them.

Hopefully we at least get a hot pizza guy this time around.