Published by Danielle Sherman-Lazar on May 18, 2019 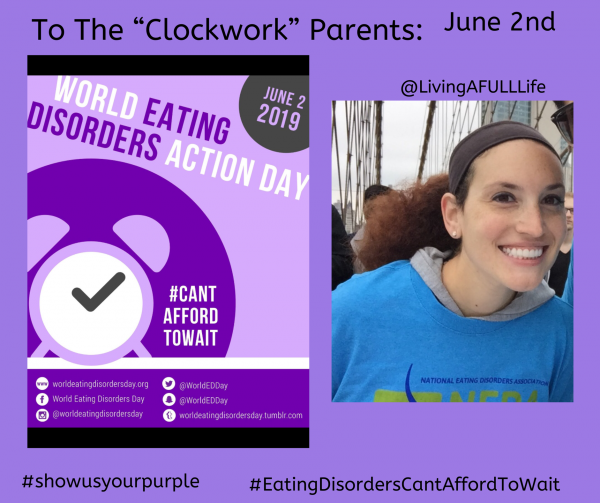 To the parents of children with eating disorders,

A lot of people blame you. They say you caused this illness. But us children know the truth.

You are the opposite—a child’s biggest ally and support in her fight for her life.

You have watched your child deteriorate from body to mind and become someone that wasn’t the little girl or boy you once knew.

You could fix most problems your child had with medication: Motrin, and a prescription like Amoxicillin for the occasional ear infection.

But this-this was a whole ‘nother beast, that couldn’t be easily fixed with a band-aid and a kiss.

Throughout your child’s life, like clockwork, you were there, as a "fixer” --to pick your child up.

But this-this was different.

Her entire demeanor changed: She was withdrawn, depressed, a former shell of herself.

His interests changed: He became absorbed in the world of calorie counting and exercise—obsessing about every little thing he chose to put into his body.

And her health declined to the point where you were completely terrified.

You were confused by this new person your child became.

“Why?” You asked, screaming with frustration. But your child, face tear-streaked, couldn’t answer that “why.”

This was when you realized what you were up against.

So, you put your fighting gear on.

If you were one of the lucky ones, and your child finally said in her own way, “I need help,” you came as if you had been waiting for those words for years. Maybe you had been. If it was less time, it most likely felt like years upon years.

Or maybe you forced your child to get help.

You took your child to countless therapy sessions, doctor’s appointments, whatever she needed to get better. Maybe you fought with insurance to get your child proper care.

You hoped and prayed your child would be okay. Seeing your child suffer was heartbreaking and unbearable.

Maybe he is still struggling, or maybe she found recovery—all that is left of the illness are the scars of what was.

But you always remain prepared to fight if it shows up again.

Because as parents, like clockwork, you are always there. And always will be.

Take the pledge and tag your “clockwork” parents below: http://www.worldeatingdisordersday.org/get-involved/take-the-pledge/.