Everyone Will Have An Opinion, But You Are The One Who Decides

Published by Maureen@Raising The Capable Student on July 10, 2017 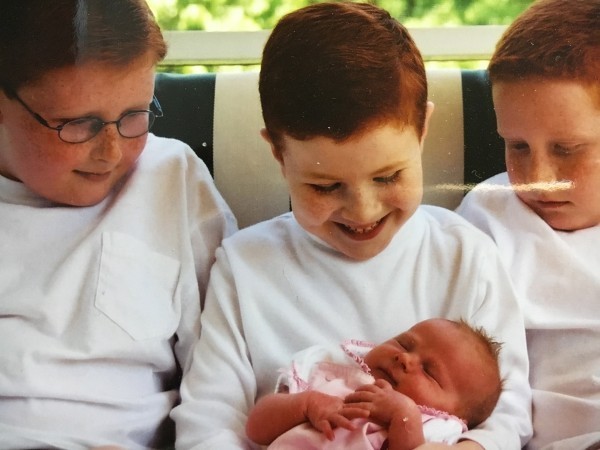 I struggle with names. I have four kids, and I’m a school librarian, and I can’t keep anyone straight. It’s awful. I’ve managed to come up with some crutches for when I’m at work, but home is different. At home, my kids expect me to know which one is which.

Of course I know which one is which, I just don’t always show it. To be fair, though, I’ve usually had to say their names under trying circumstances, like when the dishwasher still has to be emptied, or the garbage still needs to go out, or the table still needs to be set. My kids take it personally when I call them by a sibling’s name, but I’ve learned that doing this is an actual thing, and I am actually quite normal. So there.

Even though I admit to being name challenged, I loved naming my kids and took the responsibility seriously. And even though you didn’t ask me, I’m going to share with you my best advice for naming your baby.

Yes, I am name challenged - no, I don’t know you - and no, I’m not financially involved in the upbringing of your baby. None of these facts will stop me from giving you my opinion, which is good because it will prepare you for the ton of other people who also will not be shy about giving you their baby name opinions.

Here’s my best advice: Once you decide on your baby’s name, believe in your first major decision as parents. Have the courage of your convictions, and assert yourself if you have to. Your baby’s name is one of the first decisions you will have to make as a parent, and if you can’t stand your ground here, you might as well throw in the towel on the whole parenting thing.

I've been there. When my first baby was born, my own mother immediately wanted to figure out how she could change his given name to a nickname. It drove me crazy. I’m not a nickname kind of person.

It seemed no matter how many times I would correct her on the real name of the baby, she would persist in trying to get the nickname started. When my father complained that I was being a little touchy about the whole thing, I pointed out that while they were all sound asleep one night, I was pushing 8 ½ pounds of baby out of a 10 centimeter opening in my nether regions. If he wanted to know touchy – that was touchy, and most importantly, that gave me the right to name that 8 ½ pounds of baby whatever I wanted.

Not surprisingly, that worked. Sometimes you have to go nuclear.

Of course, every rule has an exception, and I might be facing that this September. My youngest child, and only daughter, wants to go back to school with a nickname. The name that I held in my heart through the births of three older brothers, the name her dad and I picked out, and the nurse in the delivery room declared “perfect” on that incredible morning 13 years ago when I heard, “it’s a girl”, that name. She thinks it’s too long.

I hate the idea, but I love her, and 13-years-old is about as touchy as it gets so, I guess I’ll let her decide. But, if she thinks I’m going to remember yet another name, she’s crazy.

What’s In a Name?
How We Decided on Calista Mae
You Named Our Twins What?
advertisement

What’s In a Name?
How We Decided on Calista Mae
You Named Our Twins What?