Last night I came down the stairs to see the mess in the kitchen — my shoulders sunk and my head lowered. I was tired and done with the day. The kids were FINALLY in bed and my husband was preparing to leave — he had to run an errand for work that could not wait until the morning. I walked up to him and I must have looked defeated because he pulled me in for a hug and asked, "What’s wrong?" I pulled away and started to open the dishwasher and I said “I don’t want to do this.”

What I wanted was an hour to myself, what I wanted was to watch This Is Us, the ONLY television show I watch for me. I wanted an hour of not doing dishes, washing bottles, folding laundry or anything other than sitting down and enjoying something for myself. 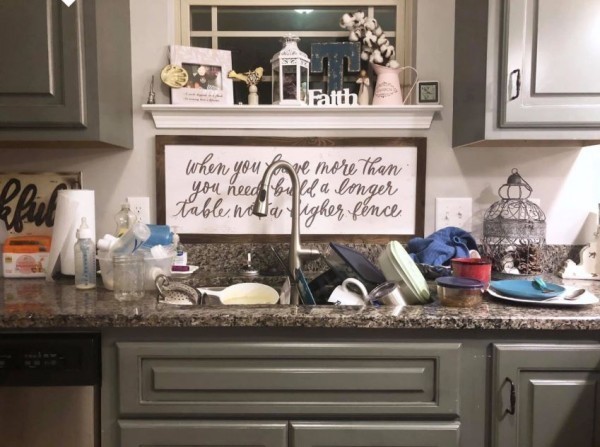 I felt guilt in my thoughts but I voiced them anyway. I sheepishly said, “I haven’t had an hour to myself in two weeks and I’m behind on watching This Is Us.” I felt so selfish and guilty as soon as the words left my mouth because truth is he hasn’t had an hour to himself either. Truth is we both clamber around together night after night picking up toys, doing dishes, washing bottles, and packing lunches. We are both tired every night.

My husband hugged me and said, “I will get up early in the morning and I will clean all this.” By saying I want an hour to myself meant stealing an hour from him. Now the guilt felt like a stab to the gut. I rebutted, “What about the bottles, they have to be done tonight.” “No” he said, “We have one clean if the baby wakes, the rest can sit.” He told me to sit down and enjoy my show and he was out the door.

I fought the urge to stay in that space and clean it, I fought compounding guilt that my husband would be setting his alarm an hour early so he could clean this mess while I enjoyed an hour of TV. I turned the light out and walked out of the kitchen, sat on the couch and enjoyed an hour to myself catching up with the Pearsons.

The guilt washed away because I realized this is what marriage is, it’s what marriage should be. My husband put my needs before his own, he took one for the team so the team could keep on winning. His self-sacrifice planted a seed in my heart to look for ways I can selflessly serve him in return. He planted a seed of sacrificial love, a seed I hope we continue to water and grow.

Marriage is hard, even the best ones have weeds start to grow every now and then, but you have to prune and pull those weeds and plant fruitful seeds in their place. You can’t sit back and hope the other plants take the garden back from the weeds, you have to put in the work to stop the weeds from spreading.

Choices
In Our Relationships, The Small Things Are The Big Things
Guilt
advertisement

Choices
In Our Relationships, The Small Things Are The Big Things
Guilt