Published by girlscoutflunky on March 2, 2017 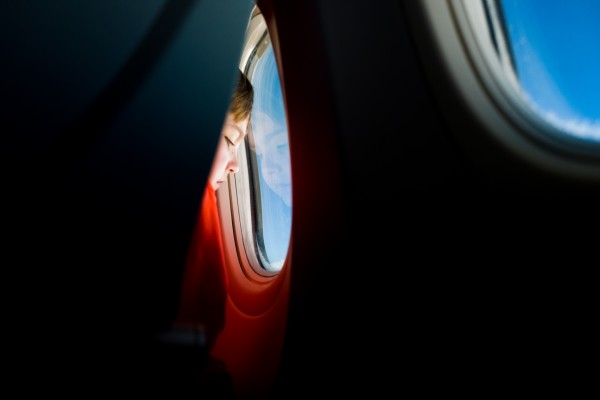 Traveling with children is never easy nor glamorous. Trips or vacations are hard to deem as a break, because the effort involved in getting from point A to point B is exhausting at best, painful at worst. Many ingenious hacks, tips, and remedies for traveling with kids have been spoken for. Even with all the tricks of the trade, we would have never made it on any of our adventures if it weren’t for others. My children have flown a handful of times, with the majority of our traveling done in the car. Living far away from family equates to long road trips several times a year. Plane, train, or automobile--strangers have made our travels palpable and somewhat enjoyable. For that, thank you. Thank you ten times over.

Flying by myself with my then two-year son and my three year old daughter, I am getting ready to board the plane.I have my son in a stroller to keep him contained and I am holding my daughter’s hand. As I unstrap my son to fold up the stroller, he jumps out like a caged animal and escapes down the jet bridge. In a matter of seconds, he finds himself at the door to the plane, with a lovely flight attendant blocking his entrance. As he runs back towards the airport, another flight attendant blocks his path. Zone defense was in full effect and the little turd didn’t have a chance. The three of us wrangled him and our belongings onto the plane, while dire diversions took place at rapid speed to get him belted in. Getting off the plane was no easy feat either, but we made it to our destination. To the kindly flight crew--thank you. Thank you ten times over.

Our flight left early in the morning and headed to Florida. We were ready for the beach, sand, and sun. Older and able to grasp the concept, my son was super excited about flying. He didn’t remember his first go-around and was curious about everything. The crew was very accommodating as they showed him the cockpit, gave him extra snacks, and showed him a hidden compartment. About an hour into the flight as my daughter slept, as did the rest of the plane, he started howling. With a crazed look in his eye, he suddenly did not want to be on the plane, by the window, or have the tray down. Or up. Or anywhere near him for that matter. My husband and I tried everything to soothe him, but to no avail. As he continued to sob, a flight attendant came by and shoved a drink in my hand. “ You need this. Drink up. It’s on me.” Sweet, glorious words that accompanied the best screwdriver I have ever tasted. Her gracious gesture helped soften the remaining hours, as my son didn’t quiet or fall asleep until we were descending to our destination. Of course. To the sympathetic and benevolent flight attendant--thank you. Thank you ten times over.

I was driving with the kids to visit my parents, six hours away. We stopped to go to the bathroom and stretch our legs a bit. All three of us were in a stall, unquestionably a bit cramped. As I help my daughter with her overalls, my son disappears under the stall. He is crawling under the stalls like a slithering python, a human swiffer collecting every morsel of public restroom filth with his torso. His maniacal laughter makes it worse, as it incenses me more. I look under again, to see a woman at the far stall. At this point, my whispers to tell him to stop and come back are just loud, terrified commands. While I am yelling at him to stop, I am also profusely apologizing to the woman. My daughter and I exit our stall, grab him by his elbow and then go back to our original stall to bask in the horror, embarrassment and furor that just took place. Undaunted, the woman just laughed, washed her hands, and went out the door. As I basically bathed my son in the sink, my lecturing going in one ear and right out the other, I thought of the woman. So understanding and ridiculously good-natured--thank you. Thank you ten times over.

On a particular long leg of a trip to Kansas, we told the kids to hold it--they could go to the bathroom when we got to the restaurant in less than ten miles. When we got inside, the line to the women’s restroom was six people deep and the men’s was closed for cleaning momentarily. My kids were doing the pee-pee dance and threatening leaks if action wasn’t taken. A woman in front of the line, motioned us for us to take her spot. As my kids busted into a stall, just in the nick of time, my daughter yells out,“They could have courtesy-flushed. It smells soooo bad.” To that extremely courteous and thoughtful woman, who let us take your place in line--thank you. Thank you ten times over.

I am an educator by trade who enjoys writing about the minutiae of everyday life through the lens of a mom and a pastor's wife, who fully agrees with the notion that people who swear more, are smarter. My work has appeared in Scary Mommy, The Huffington Post, In the Powder Room, and several other publications. Check me out at www.girlscoutflunky.com or @girlscoutflunky on Twitter.

Thank you to the flight crew, strangers in the stalls, and a drink high in the sky (I feel a count...
Finding the Village Along the Way
Happy F!%# New Year
advertisement

Thank you to the flight crew, strangers in the stalls, and a drink high in the sky (I feel a count...
Finding the Village Along the Way
Happy F!%# New Year