The Flight That Didn't Go As Planned 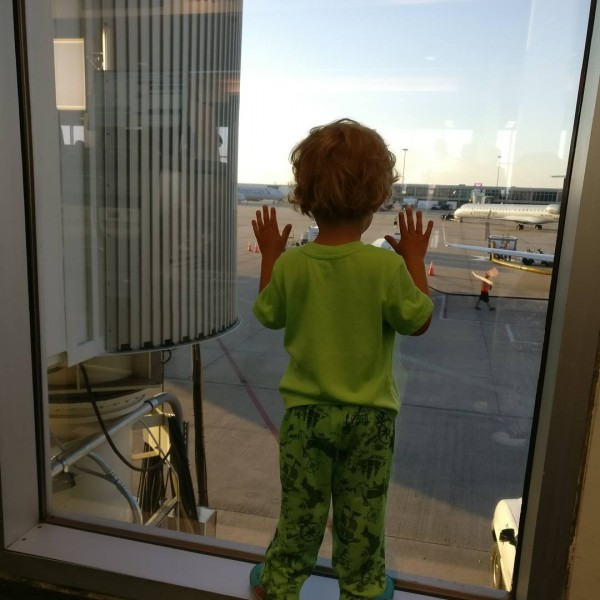 Last summer, my son and I joined my parents on a road trip to see my sister and her family. The 19 hour drive to Oklahoma from Toronto went as smoothly as anyone could hope for. My three-year-old son behaved like a pro; like a champ. Needless to say, we were all pretty impressed with the way my little human handled sitting in the car for that long with minimal stops and watching Minions over and over.

Ten days later, my son and I flew home as my parents were staying with the family for longer and we needed to get back to our routine. I thought, if the drive went that well, then the two flights we needed to take to get home should be a breeze. Should be, but wasn't.

Our journey started out smoothly. Despite being up at some ridiculous hour in the morning, my son went with the flow as best as a three-year-old wild-child can go. He stayed by my side, ate his snacks, and drank his juice.

However, the smooth-sailing quickly turned into a storm when my son realized he wouldn't be getting on the plane through the window. Yes, you read correctly: the window. And because he couldn't exit the window to enter the plane, all hell broke loose.

I went from being the mom who had the nice sweet boy to being that mom taking that kid on the plane. I had to usher him towards the ticket lady like a sheep-dog. My boy screamed and protested the entire way down the walkway. He desperately wanted to get on the plane he saw through the window and couldn't understand that the plane he was getting on was in fact the plane he wanted to be on. I remained as calm as a mother who's about to snap could be while assuring him that everything would be okay. But because his toddler brain couldn't process what was happening, my attempts were futile.

Once on the plane, my anxiety peaked as my son's screaming increased. All the eyes were on the woman holding the kid who would spend the flight disturbing the peace. We found our seats which were luckily at the very back of the plane. I pointed to the seat by the window, doing my best to get him interested in the plane's wing but I was unsuccessful. He had already gone past the point of no return and couldn't snap out of it.

Slowly, my patience started running out and I started getting frustrated and teary-eyed. A woman sat beside and immediately asked to switch seats, as if we carried the plague and she was seconds away from catching it. And while I understood how she felt, I couldn't help feel worse than I already had. I was embarrassed and ashamed that I couldn't calm my own child. It was a low point for me. My son was out of control. He was red-faced and wide-eyed while screaming bloody-murder. He was simply inconsolable. He was hitting me and trying to escape the plane like it was his duty. He had lost all control and while I was bad for myself, I felt even worse for him. He didn't understand what was happening and why he couldn't get on the plane he had seen through the window.

Everyone looked at me, but no one said a word. Not one person. I felt alone and desperate for someone to make eye contact with me or tell me it's going to be okay. But no one did. Not even the mother who sat in front of us and returned my son's blanket after he whipped it in her son's lap.

I know I shouldn't be the one who was embarrassed because I wasn't the one freaking out as if the world was being ripped away from me. But this was my child and I was unable to calm him down. I felt like I was failing. The looks, the stares, and the sighs all made me wish I could vanish.

We landed without a hitch and moved on to our connecting flight. I made sure I stopped at a candy factory in the airport and stocked up on lollipops, my kid's favourite treat. When it was time to get on the next flight, I lured him in with a lollipop like a horse to a carrot, and he passed out right after he ate it. He slept for the entire flight.

Would I do it again? You bet I would. I learned something on this journey. I learned that I am stronger than I thought and that my child behaved like a child does. I also learned that I can't count on the general public to make me feel better. I need to pull up my big-girl pants, pack my resource belt, and not care what anyone else thinks.

My child is three and three is unpredictable.

Finding the Village Along the Way
Thank you to the flight crew, strangers in the stalls, and a drink high in the sky (I feel a count...
To the football coach who taught my son a lesson: I am thankful for your words
advertisement

Finding the Village Along the Way
Thank you to the flight crew, strangers in the stalls, and a drink high in the sky (I feel a count...
To the football coach who taught my son a lesson: I am thankful for your words