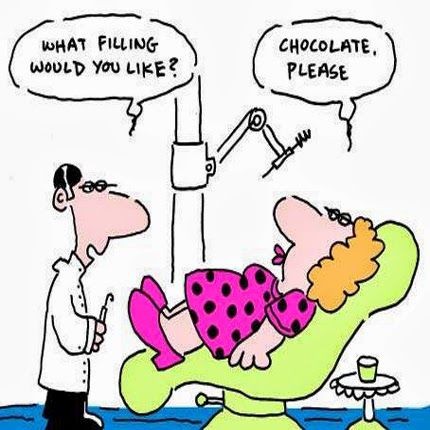 Cue the quietly mumbled inappropriate and crass jokes from the male peanut gallery.

And, no, that's not a jab at all men -- just the peanuts -- and any potty-mouthed crude humor-loving women who will never admit they just uttered a little "that's what she said."

But, seriously — it hurts.

Still, jokes alleviate the pain ever so slightly, so I'm going to keep making them.

Now, let's get to why I have the pain.

Yesterday, I went for a root canal.

Actually, I went for a consultation, diagnoses and some pain relief and what I left with was an emergency root canal that will likely next week need to be capped/crowned.

I've been having pain for quite a while and "dealing with it" as so many of us do when are 30+ years old, have kids, and have these semi-random ailments.

It wasn’t so bad all of the time, but it was just bad enough consistently that it was frustrating the hell out of me, stealing my smile and joy and exacerbating my RBF (resting b*tch face).

The thing is, after yesterday's procedure, it still hurts.

The anesthetic, of course, wore off completely, and now I can’t decipher whether the pain is the same as before or more of just an after dental work soreness, I’m incredibly uncomfortable.

Yet, here's what I still got done post-appointment yesterday:

Okay; that's nothing too impressive.

But what if it is?

I'm not sharing the moments of my yesterday for empathy or accolades from any of you but in an attempt to give myself more credit for my daily efforts, especially those made under semi (but absolutely could be worse) duress.

You see, as I walked my son and his younger sister down the stairs of the preschool yesterday afternoon, only thirty minutes after leaving my procedure, I told my son about my tooth surgery and here's what he commented,

"Couldn't you have just let it hurt more and gone another day?"

Why did he make that remark?

Because my son wanted to go to the park but since Mommy spent all morning at the dentist, still wasn't feeling too hot and had an immense amount of shiitake to do at home, we weren't going to go, and he didn't think that was the most awesome thing.

My son doesn't lack compassion, he's just five, and at five, you just want to play (and play and play). I understand that, and that's why his little quip didn't upset me.

However, it did make me think.

For many weeks before this day, I was "just letting it hurt more" and avowing that I would take myself to the dentist "another day."

So many parents, specifically mothers, work ourselves silly and into mini (or significant) breakdowns, even depression, or in my case, into the root canal chair and the culprit, well, it's partially our consistent negligence of self-care.

Though us mothers are almost superhumanly capable of doing #allthethings and being everything to everyone, some of us really stink at recognizing when we shouldn't wait "another day" to tend to ourselves and our emotional and physical well-being.

This is YOUR reminder that whatever is irking you, physically or emotionally, be it faintly or very much, don't "just let it hurt more" and don't give it "another day" to see if it goes away.

Take care of it.

Take care of all of it.

Take care of yourself, and do it today.

So your child has a dental emergency! Now what? Chances are your Dad will know what to do.
Dealing With Dental Anxiety in Your Child
Top Reasons Senior Dental Care Is Very Important
advertisement

So your child has a dental emergency! Now what? Chances are your Dad will know what to do.
Dealing With Dental Anxiety in Your Child
Top Reasons Senior Dental Care Is Very Important