BBC Dad | Parenthood Considered at Odds with Professionalism. But Why?

Unless you're living under a rock (and maybe even then if you have wifi), you've seen the video of professor/dad Robert Kelly that went viral this week. During a very professorial if somewhat dry explanation about South Korea on the BBC, his interview was hilariously interrupted by first a toddler, then a baby in a walker, and then a panicked wife/mom trying to corral them away. The departure of the toddler knocks over some books stacked on a bed, which the viewer then realizes are stacked there to present a more professional visual for the camera.

Robert himself seems frozen in embarrassment;that all of this is occurring as he is attempting to give an insightful, professional interview. He apologizes several times as if he himself were the naughty child.

Much had been made of this scene. Speculation about how Robert pushes his son away, without even looking at him. Why doesn't he just pick up the child? Or politely tell the interviewer, "Excuse me," and direct the child to leave. And why is the wife so panicked? Her demeanor of terror suggested to some that she was the hired help, instead of the mother of the interrupting munchkins.

I'm sure in hindsight, he wishes he would have handled it differently, made a witty remark about work-at-home parents and self-assuredly ushered the children out himself, all the while continuing to lecture on international relations.

After laughing myself at the absurdity of the scene and Robert's embarrassment, I came to a secondary reaction.

WHY WAS HE SO EMBARRASSED?

I'm guessing Kelly was humiliated that his family crashed his BBC interview. He was terrified of being perceived as unprofessional because of the interruption. He worked hard to become a professor, a pundit on international relations. He doesn't want to be taken less seriously because he literally has to phone in an interview and hope his children don't invade.

Why are parenthood and professionalism so often at odds? 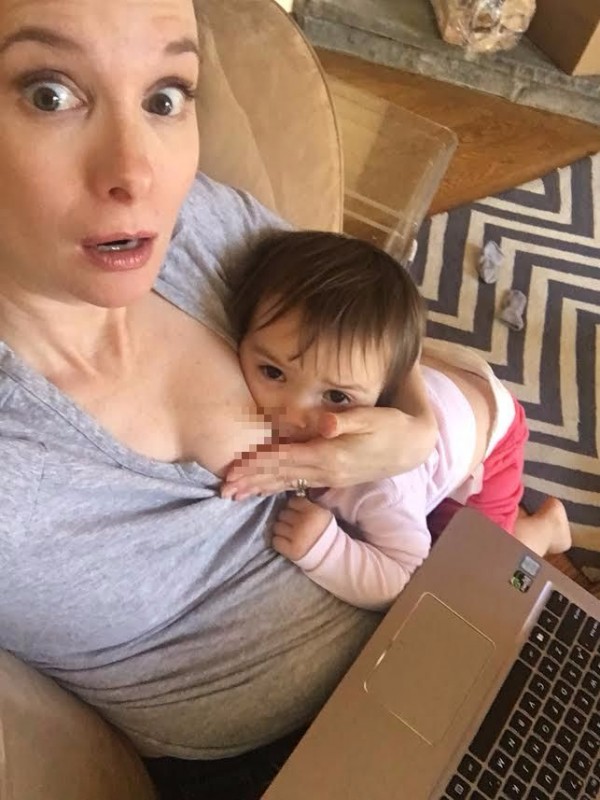 If you ask me, (yeah, I know, you didn't) that's bullshit. I'm pretty sure cursing is perceived as unprofessional as well but bullshit is the best word I can think of to describe it.

If a person, man or woman, can perform their professional duties, while simultaneously keeping one or more human beings alive, that person should be viewed as the opposite of unprofessional. I know my single and/or childless friends are going to hate this, but given two prospective applicants who have the same qualifications for a position, but one is a parent and one isn't.... I'm can't help but favor the parent. Just by nature of being a parent, one has to become much more time efficient, adept at multi-tasking, and flexible as circumstances change. Arranging childcare alone is a major accomplishment.

Parent and professional should not be titles at odds with each other. I'm doing my little bit to change that. So if during a Skype meeting, I raise the camera angle, yup, I'm probably breastfeeding. And if you get an email from me at 11:30 pm, it's because I have to fit work in when my kids are asleep. And if there's a little bit of pureed apple on my blouse in the morning, just know I was able to feed, dress, and get two wiggly whiny (k)ids out of the door in the morning, all while reviewing talking points for our meeting.

Because I'm a mom. And being a mom is the most badass position I've ever held.

Watch this episode of our web series, "Slummy Mummy," which is based on a real experience I had, taking my baby to a job interview.

For more on this subject, check out this article in Fast Company.

Jennifer Weedon Palazzo is the creator of MomCaveTV.com, an online network of comedy shows for moms including Slummy Mummy, Slacker Mom, Double Leche, Blabbermom, and MomCave LIVE. When she’s not writing about the funny side of being a mom for sites like Scary Mommy and Mamalode, Jennifer can be found eating Reese’s Cups while furiously bidding on vintage clothing on eBay. She splits her time between Manhattan and the Berkshires with her husband, Evan, bandleader of The Hot Sardines and their two kids. Follow her on Twitter @MomCaveTV and visit

Quarantining and the Workplace: Lessons I've learned from my daughter
My husband doesn't love me like society says he should
Surviving 2: Your guide to second-round postpartum sanity
advertisement

Quarantining and the Workplace: Lessons I've learned from my daughter
My husband doesn't love me like society says he should
Surviving 2: Your guide to second-round postpartum sanity