Back-to-School Blues (It's Not What You Think)

I have the back-to-school blues, but I'm not sad because my babies are leaving the nest, going it alone in the big, wide world of preschool or even grade school like so many of the mournful parents out there. Nor am I sad because they are moving on without me, growing up faster than I am ready. No, mostly I'm sad because I can no longer send my son out of the house looking like this: 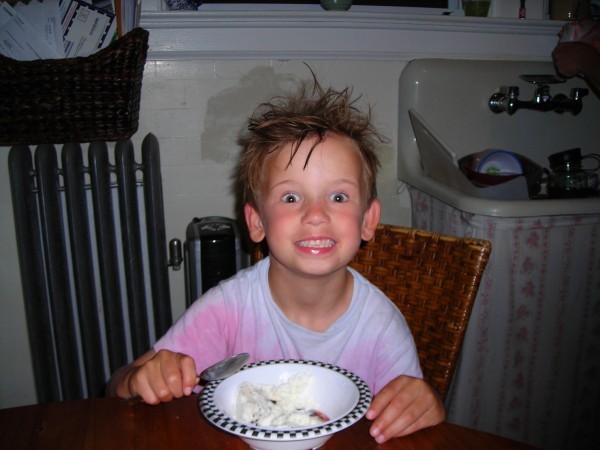 Or with a delicious breakfast of ice cream.

During the long, lazy days of summer we dispensed entirely with grooming. I don't believe Jack brushed his hair once the three months he was off from school. Every day he rolled out of bed, tangled rat's nest atop his head, and strode into camp exactly as is. His camp was the happiest place on earth (probably because I was paying so goddamn much for it), and for all that money I felt hair brushing should have been included. Teeth brushing, too, for that matter. I'm not saying he didn't brush his teeth all summer. I'm not saying he did, either. I'm not saying anything about teeth.

Ok, he did brushed his teeth. I wasn't willing to surrender that battle because I fear dental work and, more importantly, dental bills. But the crazy hair on Jack's head looked cute at least according to me, and it opened up a whole five minutes of free time in the morning. One less task to do, one less argument to have before 9:00 a.m. My daughter went through a similar brush-free period, but with her long hair, she looked more homeless than free spirit. It wasn't such a good look for her, and while I did my best to discourage it, my disapproval only makes Kate more resolute. It was just best to give up and deal with convincing the world at large that my child wasn't actually homeless.

Jack though had never looked homeless until this summer. Although he showered nightly and went to bed with perfectly normal hair, in the morning he always awoke to the matted fuzzy mess. I don't know what went on in that room overnight - whether he held wild, third-grade raves in there or snuck out to hit the bars for a night of hard drinking, but in the morning the kid always staggered out of his room looking like it'd been a rough night. Fortunately, his new look wasn't anything that couldn't be fixed with a quick visit to the barber before September.

Kate's homeless stage lasted for a good deal longer. Until about now. But it all changed one miraculous day at Target when we were shopping for some back-to-school supplies. Kate wandered down the health and beauty aisle, plucked a bright turquoise bush off the rack and asked me to buy it for her.

It's not like she didn't already have a brush. She has a brush. She just wanted a new-fangled, ergonomically designed, fancy brush in a tropical hue. While I generally don't like buying stuff we don't need, it was only a couple of bucks, and that day I was feeling generous. A couple of dollars later Kate's homeless days were behind her. Now I can't get her to stop brushing. She takes that brush with her wherever she roams. I think she even sleeps with it. If I had known a $5 Target hairbrush would have put an end to this whole homeless-chic style, I would've bought it years ago.

I know I should be happy school days are here again, but it only means I have to make sure my kids look presentable. Aside from the hair stylings, I also have to make sure they have clean (and matching) clothes instead of the same swim suits and camp-issued t-shirts they wore every day of the summer. That means I'll have more laundry to do. That means I'll probably need to do it multiple times during the week while also cooking dinner and doing homework and running the kids to various activities. I'll also have to make sure the kids' backpacks are packed and they leave on time and they wear the right attire on the right day and that whatever they're wearing, it's all very fashionable. It means I'll never be able to send Jack out in this: 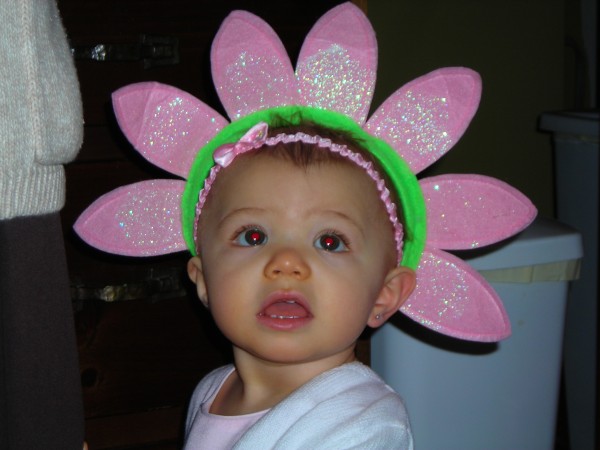 Just kidding. That's not him, but Jack would make such a cute flower baby.

No, no more fun and games. It's time to get serious.