Anatomy of a Little League Game 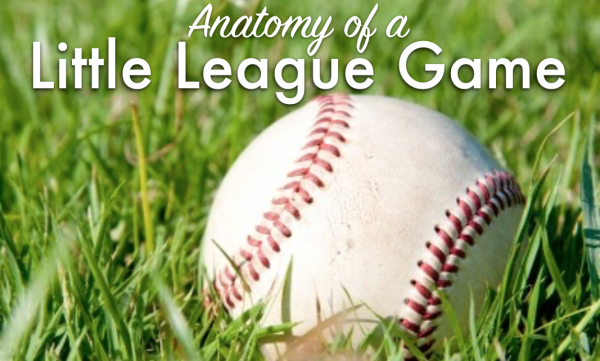 The weather is warm and the pollen is high! For my family that means baseball. I love the game, even if it does take over my life and turn me into a crazy person. I thought I’d share the experience of managing three kids and a Little League game on a school night, for those of you unfamiliar with the experience.

5:45 p.m.: Arrive at ball field and of course, there’s no parking. Off-load children and gear and folding chairs and circle the lot like a bird of prey, hoping someone is leaving to get Chick-fil-A. Spot opens up but it’s a dreaded foul ball/smashed windshield spot. Sigh and keep circling. See a t-ball mom pull into it, she’ll learn soon enough.

6:40 p.m.: Fears confirmed. This other team is next level good. And huge. And they all have those fancy orange bats. This is going to be interesting.

6:50 p.m.: My kid is batting next and I feel the butterflies that presage a state of being known as “The Puke Zone.” You may find yourself there if your child is pitching, batting, or in the outfield with his glove up and the ball heading straight towards him. It’s the moment where you simultaneously realize “it’s all up to him” and “there is nothing I can do to alter the outcome of what’s about to happen.” Normal parents tend to get over this after a season or two of playing ball. I am not a normal parent.

6:59 p.m.: A tiny dude on our team comes up to bat. He is literally half the size of the kid playing first base. He stands there, looking terrified, and doesn’t swing. The good news is that his strike zone resembles the size of a postage stamp, so he pulls a walk after four pitches. When he gets to first base, the huge kid with the mustache gives him a big smile and a fist bump and the little guy on our team grins and grows three inches. Mustache kid is great.

7:02 p.m.: Smallest daughter runs over to me, damp and sweaty and covered with a light dusting of red clay dirt. She looks like a filthy Oompa Loompa. She grabs my water (she has her own, by the way) and proceeds to drink all of it.

7:10 p.m.: My children begin to repeatedly pester me for hot dogs and chips from the snack bar notwithstanding the fact that they’ve already eaten a full dinner. I say yes only because I want a hot dog, too. Little League hot dogs are delicious and taste like America.

7:15 p.m.: All of a sudden our team is playing really well. It occurs to me that we’re far enough into the season that I finally know everyone’s name and have stopped yelling things like “Good job, number 8!”

7:17 p.m.: OH GOD. He’s up to bat again. Time stops moving at it’s normal pace and I feel like my dog looks right before we take him to the vet. Crap. He struck out. Curse myself for participating in a game that is literally defined by statistical failure. Where else do even the best performers in a sport fail 70 percent of the time? This game is dumb.

7:19 p.m.: Another kid strikes out and his father hisses “Jesus Christ” and kicks the fence. The Puke Zone is a dark place, man.

7:23 p.m.: The fence-kicker’s kid walks off the field with his head hanging. I watch in the dugout as his team-mates pat him on the back. Head still down, he sits on the bench next to my son, who whispers something to him. They both start grinning like weasels.

7:30 p.m.: Moment of panic. I realize I have no idea where my youngest child is and have not seen or heard her in the past ten minutes. She then runs past our chairs with her buddies, squealing loudly. Husband finally shows up and she jumps into his arms, smearing his work clothes with dirt, kisses, and ketchup.

7:35 p.m.: Kid out in right field is bored and doing the Whip/Nae Nae, seemingly oblivious to the fact that we can see him.

7:41 p.m.: I walk over to check on the little kids and see another game in progress. I watch as a vaguely familiar small person in a uniform races across the field and makes a spectacular catch. It occurs to me that last year, the same little guy was playing with my youngest, filling up his shoes with dirt and rocks and building stuff under the bleachers to pass the time. I see his mom and ask, “How did he get so big?” She shrugs and points at my son, who has grown five inches and two shoe sizes since last season. “I was about to ask you the same thing,” she replies.

7:55 p.m.: Walk back to our game. Apparently my kid made a tremendous play at first base while I was gone. Of course he did.

8:02 p.m.: Our team’s best player is up. He strikes out, which is unusual for him. His mom is smiling serenely and seems not the least bit affected. I ask her, “Do you ever get that pukey feeling when he’s batting? It’s so nerve-wracking.” She smiles and says: “Honestly, I’ve sat through so many games that one more doesn’t really matter to me.” She pats me on the arm. “Just relax, sweetie. It’s supposed to be fun, right?”

8:04 p.m.: It’s my kid’s turn to bat again. I will be like that lady and serenely not care and just try to have fun. But he strikes out again. This time with the bases loaded and his buddy pitching to him. The inning ends and I can tell he’s pretty torn up. But he’s playing short stop, so he shakes off his disappointment and pulls it together.

8:05 p.m.: Occurs to me that a game that’s defined by statistical failure is probably the best way for a kid to learn how to pull it together, shake off disappointment, and get on with the next thing. This game is not dumb.

8:25 p.m.: He’s up again. Be cool about it. He hits it to the outfield! It’s a double! He tries to stretch it to a triple and gets tagged out at third. He jogs back to the dugout, his face a dark cloud. His coach takes him by the shoulders and looks him right in the eye. You drove in a run, kid. You did good.

8:31 p.m.: We need a big hit. Two outs. Our slugger is up. Team is going nuts in the dugout with their caps on inside out. It’s a double! Two runs score! Everyone is screaming and the kids are celebrating like they’ve just beaten the Yankees.

8:35 p.m.: The goodgamegoodgamegoodgame means it’s time to go home. My youngest is filthy and exhausted and no longer fit to be in public. My oldest is starting to stress over homework she hasn’t done yet. My husband is helping the boy pack up his stuff. Unprompted, my son walks over to each of his coaches, shakes their hands, and thanks them. They pat him on the head and smile.

8:55 p.m.: On the drive home, we’re all quiet and tired. The kids have asked me repeatedly what’s for dinner. I consider reminding them of the full meal I made for them at 5 p.m. plus all the hot dogs they devoured during the game, but just sigh and wearily point the car towards the closest drive through. The boy looks at me and says, “Mom, can I ask you something?” I nod. “How soon ’til the next game?”

This post was originally published on Rants from Mommyland.

I let my son quit baseball: Here's why
Lessons from the ballpark
10 Things I Didn't Know About T-Ball
advertisement

I let my son quit baseball: Here's why
Lessons from the ballpark
10 Things I Didn't Know About T-Ball