A Letter for the Teachers

Published by Carrie Cariello on October 4, 2015 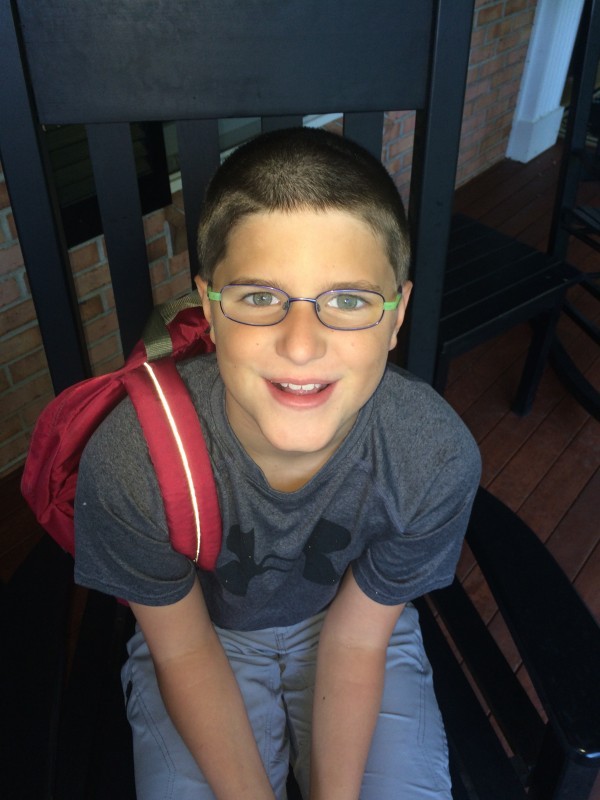 Now that we have two full weeks of school under our belts, I thought I might crack the venetian blinds to our life with five kids, and give you a little peek inside of my philosophy about school.

I do not pack snacks. We have a generous supply of pretzels, fruit, nut-free granola bars, and pre-washed carrots available at all times. If a Cariello boy or girl comes to school without a snack, it’s because they forgot to pack it themselves.

My advice? Do not feed them from your stash. They are like adorable stray kittens—all wide eyes and pink tongues—and they will live off your emergency supply of animal crackers for the entire year if you let them have so much as a crumb.

I believe strongly in something called natural consequences.

My kids also buy hot lunch. Every day. Yes, I know, I know—the calories, the salt! Pancakes at noon, and nachos on Thursday!

Listen, I just don’t care. For the most part we have nice, nutritious meals for both breakfast and dinner, and if one them would like to pack a sandwich and some fruit, we have five lunch boxes monogrammed with their initials and lots of healthy food. We have water bottles and Ziplock bags and lots of yogurts. The only thing we don’t have are Bento boxes, mostly because I don’t really know what they are.

I only check homework to see if it’s completed and whether it’s legible. I do not check answers. I do not sit at my kitchen counter and attempt to explain alphabetical order or Cuisinare rods or how many apples Pierre has left if he ate one and gave four away to his friend Billy but grew six more on a tree even though its obvious from Pierre’s name he probably lives in France and I’m not sure they even have apple orchards there.

As I like to remind my children, I already did seventh, sixth, fifth, fourth, third, and first grade. In fact, I did all the grades. And I did quite well! You might say I passed with flying colors.

(I think I was in 7th grade when I first held hands with a boy. His name was Jamie Pilks, or something like that. He was shorter than me—a lot shorter—and his hand felt small and clammy clasped with mine.)

I do not help with projects. This may mean my child’s macaroni art project will hang right alongside a girl whose mother majored in macaroni art in college and so it will be perfectly crafted in Samuel L. Jackson’s likeness even though the assignment just asked for it to look like a bird.

I do not sign things in the morning. If they don’t show me the reading log or the permission slip or by 7:00 the night before, well, the part where it asks for the parent signature is going to be blank.

I do not run back to school for anything that was left behind. They need to bring their crap home. This includes their glasses, their textbooks, their worksheets, and the special pencil with the minion eraser on top.

I don’t care if they make the honor roll.

I don’t care if they’re in accelerated math.

I don’t care if they captain a team, or run the student council, or wear a crown for homecoming.

Sure, I’ll be so proud if they do any of these that I’ll just about burst. I’ll take a thousand pictures and tell everyone I know and go to all the games. Yet in the long run it’s not incredibly important to me. This is the truth.

I care if they stand up to a bully.

I care if they introduce themselves to the new kid.

I care if one day, after they collect their pancake-and-nacho hot lunch, they notice a boy sitting all by himself. And they pass by the table where they usually sit, and slide their tray next to his.

I don’t drive anyone to school. Conveniently, there is a bus that arrives at the corner the same time every day, Monday through Friday, and if one of them misses this bus, there’s a good chance they won’t be in school that day. They’ll be at home with me catching up on important things like silent reading and cleaning the toilets.

I know it sounds mean. I know I ask a lot of them, but I promise you there are good reasons.

Sure, it helps me stay organized when we have five kids in three different schools; five kids in a complicated combination of karate, football, cross-country, track, Girl Scouts, and dance.

But it’s more than that. From the time they’re about eleven years old, most kids will essentially carry a computer in their backpack or in their hands. At any given moment, they can Google the value of Pi and how to say pelican in Spanish.

(It’s el pelicano, by the way. I just Googled it.)

They can ask Siri for directions rather than read a map, and use a calculator to figure out Pierre’s apple situation.

In this technological age, I would rather teach them the things Siri and Google can’t; how to be resourceful, and responsible, and kind.

And yet, it’s even more than that. Let me crack the blinds open just a tiny bit more, so you can take a closer look.

As many of you know, we have a special guy, Jack. He’s eleven. He’s in sixth grade, and he has autism.

The first time I heard the doctor tell me Jack’s diagnosis, there was an almost a deafening silence all around me, if silence can be deafening. It was as though tall, white-capped waves started crashing down, and the water was filling my ears.

And those waves, well, they changed our landscape forever. They pounded it into flat nothingness, and erased all of the peaks and valleys; the summits of play dates and track meets and college, and all the ordinary, normal puddles the ebbing tide leaves behind.

We had to start from the beginning. We had to build again, and resurrect our own sand castles from the damp, sandy earth. We had to–and still have to–consider what Jack really needs to know in order to make a life for himself, a life that is as independent and fulfilling and normal as it can possibly be.

And although he could care less about having friends over to play or running for the cross-country team, Jack wants to go to college. He talks about it a lot. Mostly he wonders if his college will have a water slide and whether or not it will be close enough for him to walk to a Kentucky Fried Chicken for lunch and come home on the weekends to check on Wolfie, but in his mind it is a place he is headed.

I don’t know if he’ll ever go. I really don’t. It will be a long, arduous road for him and for us, but I will do everything I can think of to steer him there.

This means I have to be harder. I have to insist on the little things, in order to hope for the big things. I have to believe—every single day, I believe—that the road to college does not start with accelerated math, or the honor roll, or a varsity letter.

I believe it starts with eating what everyone else eats in the noisy cafeteria, remembering to bring your blue folder home at night, and the philosophy that family always comes first. It starts with determination, and strength, and organization.

When I hear Jack talk about college, my heart squeezes tight like a fist. Sometimes, I have to look over his shoulder or down at the floor so he won’t see my face.

Mostly, I make myself remember that even the tallest castles towering in the sky begin with just a few tiny grains of sand.

Dear Teachers: When Does the Road to College Start?
Sucker Punch
The Tricky Topic of Food and Autism
advertisement

Dear Teachers: When Does the Road to College Start?
Sucker Punch
The Tricky Topic of Food and Autism