After 73 days in the NICU, we are finally home 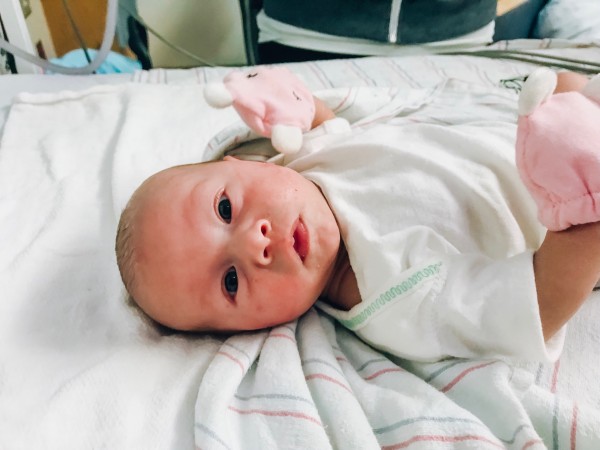 The NICU is another world. One that, at times, feels really confusing and really, really isolating. After entering the world two months early (thanks, severe pre-eclampsia), Olivia Grace spent a whopping 73 days in the NICU — and 73 days is a freaking long time. But really, ANY time in the NICU is a long time. Because in it, time seems to stop altogether as you count the minutes spent sleeping inside incubators instead of cribs and wearing wires instead of onesies. Every NICU family has a different experience. Here was ours.

We started at the NICU of Olivia’s birth hospital. Initially, she was just experiencing “typical preemie problems” — needing time to grow and time to OUTgrow issues that inevitably arise when you’re not fully developed before existing outside the womb. Olivia was 3 pounds at birth, so girlfriend was a peanut — but a fighting peanut at that. With the hospital being six minutes from our house, we visited daily; I’d often spend most of the day at her bedside, sometimes with my laptop in tow to get some work done, and then we’d come back together in the evening once my husband was home from work. We had a routine.

Olivia’s one real “problem” was bradycardia episodes, where her heart rate would decelerate, and her oxygen level would desaturate with it, sometimes to dangerously low numbers that required stimulation from nurses or doctors.

We were almost discharged. In fact, we were about two days away from supposedly going home when the transfer happened. One morning, Liv wasn’t acting herself. She was lethargic, and she had multiple “episodes” in a few minutes. And then her bloodwork came back positive for a weird bacteria: campylobacter. Weird, because it’s a bacterial strain almost NEVER found in children — let alone newborns who had never left a NICU — and comes from consuming undercooked poultry. When the neonatologist saw it, it was a five-alarm NICU fire.

Nurses started running — actually running — into the NICU. I just remember being off in the corner of the shared NICU space, crying as I pumped, the medical team whizzing past. That day was a numbing blur. The hospital transport team was already on their way. They boxed up little Liv in a heated isolette and plugged her monitors in so that she’d be tracked nonstop as we rode in the ambulance to a higher-level NICU an hour away.

Good but weird news: Her bloodwork was now negative for campylobacter. A blessing. But also, a stress because her hemoglobin count was still down significantly, as was her platelet count — and test after test came back negative.

The hospital was stumped. And let me tell you — it does not feel good when the best children’s hospital on the planet cannot figure out what is wrong with your baby.

IV fluids, two broad-spectrum antibiotics, and two blood transfusions later, and she no longer looked like a sick baby.

They still had no idea what the mystery infection or virus was. They officially diagnosed her with central apnea, as well as reflux. She was put on caffeine for the apnea and Zantac for the reflux. Fast forward a few days. I got a call from our hospitalist that she was approved for transfer back to our first hospital since her case could be managed there, and she’d be back to five minutes from home.

Literally, 23 minutes later, I got a call back. No more going back to the home hospital just yet — she needed a swallow study from the speech team, to make sure she was not aspirating from the reflux. While she had been downing bottles like a champ before the mystery illness struck, now it was more of a struggle. She’d get tired and seem uncoordinated while feeding. So, the speech team was concerned. The medical team didn’t suspect aspiration would be an issue, but since hospital #1 doesn’t have a speech team, they wanted to cross that one off the list while they could.

Turned out ... her swallow study showed mild aspiration. (Bad, since it could cause pneumonia if left unfound/untreated.)

That meant no going back to the home hospital; they preemptively figured that Olivia would be going home with an NG tube, and the home hospital wouldn’t discharge babies with that since they have no in-house speech team. So, we’d have to stay put until discharge home.

Beyond that, she had to go back to taking only 5 mL of food by bottle, only 3x per day — the rest of her feeding would be through a nasogastric tube (an NG tube — the little tube going in her nose, through to her stomach). From 50 mL ... to 5. We were devastated — it felt like such a step backward.

Fast forward a few weeks, and we have our first day without any bradycardia events! WOO. If we made it to five days event-free, Olivia could come home. HOME.

With every step forward came two steps back — or so it seemed. The #1 thing we kept hearing was, “She just needs to outgrow it.” 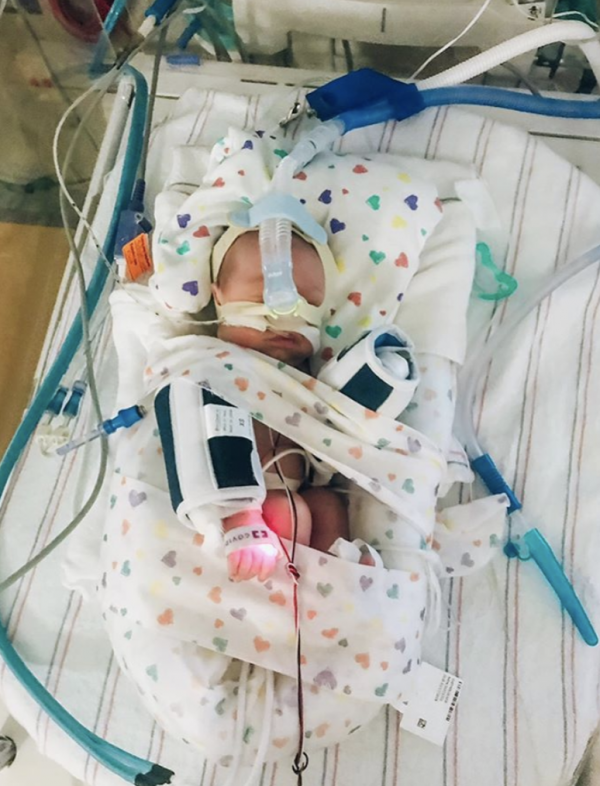 One of the most *frustrating* parts for us was the inconsistency/incontinuity in who from the medical team was seeing her. It was a different nurse every single day — MAYBE someone getting her two days in a row. It was a different doctor every two weeks unless we requested one “primary” for her where all decisions went through (which we did). There were hospitalists, fellows, residents, nurse practitioners, + various therapists — speech, occupational, physical — seeing her regularly, all on their rotations. Granted, I totally GET the want/need for variation in the medical team, to both keep the team members fresh themselves and to keep fresh perspectives coming to her case.

There were SO many occasions where I called in for my morning update and had to correct a nurse, who had her case file totally wrong. “She was on oxygen, right? Wasn’t she intubated?"

I felt relatively well versed in medicine, having so many exceptional nurses in my family. Oftentimes I was left thinking, thank the sweet Lord Baby Jesus that I can comfortably talk the talk — because too often, it felt like they were relying on my own word instead of relying on Olivia’s actual medical chart.

And sometimes, it felt like we were just guinea pigs for #science.

On her first day seeing Olivia, a nurse practitioner, came into the room during our nightly visit and said, “The best geneticist in the world stopped by to check her out today. We can do a genetics test now if you want to test for a genetic disorder.”

“Do you think she has one?!? What would it be looking at? Is it what’s recommended? What exactly did she say!??”

Our questions spit out like rapid-fire, and she was so thrown off — she went on to say that the woman hadn’t actually noticed anything “significant,” but it’s just an option that parents have. So now ... do we freak out, or not? Is there a reason for concern, or not? You don’t just flag down the top geneticist IN THE WORLD to come see a baby for no reason ... do you?

It wasn’t until after she left when a particularly good nurse (a mother herself) gave me some #RealTalk, saying this woman was LITERALLY the best in the world and could look at you walking by in the hallway and tell you what was genetically wrong with you (legit). So if she saw nothing of concern — not to worry. But it was so much of situations like that — false alarm panic buttons, relatively unclear testing, or less-than-stellar bedside manner that left us feeling more confused or concerned than comforted.

And this phase hit me hard.

I tried so hard to stay as positive as possible, but I’d be straight-up lying if I said it was easy, or that I was always full of hope or faith. I was shaky, at best.

I also had what I personally diagnosed as postpartum depression during this period. I was never quite sure if it was “actual” postpartum — a hormonal imbalance after giving birth — or more situational depression from seemingly unending NICU life, or a combo of both. And I’ll never really know. 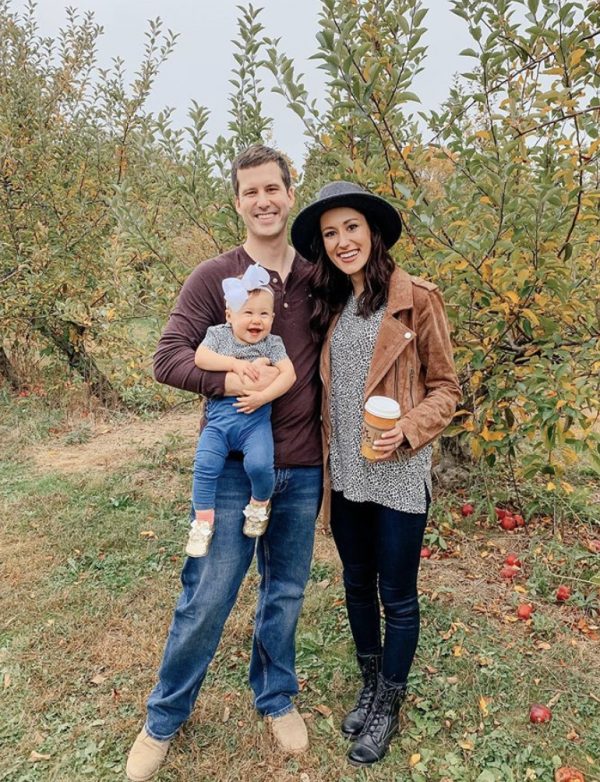 At 7 p.m. on Christmas Eve, she had her last event. And she was event-free since being discharged on Day 5 – December 29 – to be home in time for the New Year. And I like to think that it was even more meaningful. Because it was on the night that our Lord came into the world as man. And it felt like God saying, I have come. I am here. It’s going to be OK. 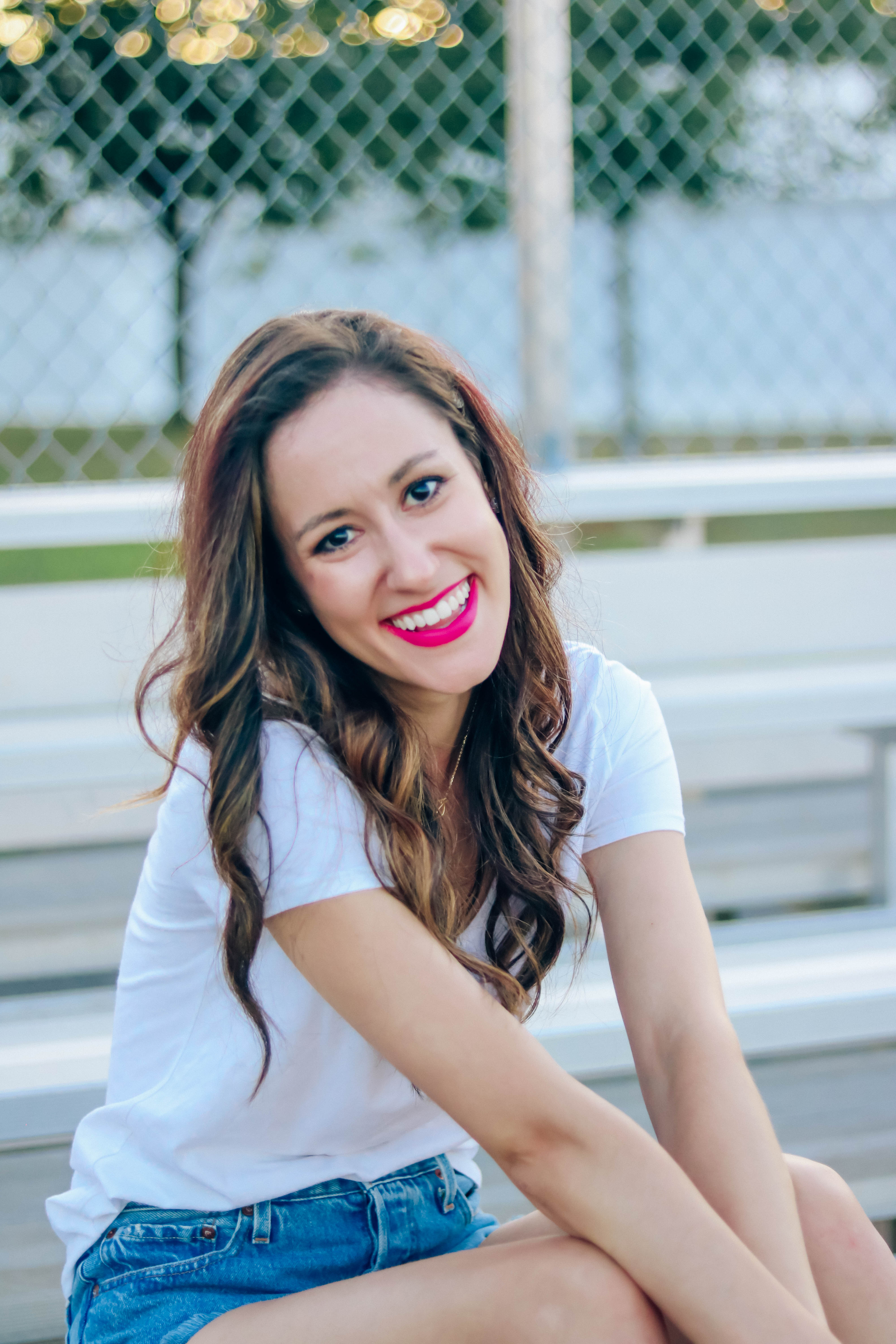 Erica Ligenza Gwynn is a one-woman blend of millennial chic, big heart, and savvy inspiration. As the founder of hit lifestyle blog Coming Up Roses, the Philadelphia-based business owner, mom, and wife covers every angle of modern young womanhood, from fashion and beauty to relationships and entrepreneurship. Determined to share what she’s learned, Erica also created BossPitch, an accessible online course that guides aspiring bloggers and social media influencers through finding and maintaining the right brand partnerships. Erica also dives into tactical tips to help others not just survive but thrive in life during her weekly THRIVE PODCAST. A motivational, hilarious, candid voice that hundreds of thousands of followers trust daily, she pushes women to see their true worth, take action, and savor their lives. Erica’s first book, CAFFEINATE YOUR SOUL: 52 Monday Mantras, is due in early 2020.