Published by Welcome to my World on October 7, 2015

Your baby sleeps?!?! I heard that question about a million times after we brought our daughter home. She was on a strict sleeping and eating schedule. She ate every four hours and was very good about sleeping. (We have the NICU to thank for that.) We could lay her down in her bassinet and she would fall asleep within minutes. There was never a huge problem with her sleeping and for having a newborn we were actually getting some sleep. That is until we bragged too much. I saw the sideways glances and the look of rage on people's faces when we would say those magic words "Our baby sleeps quite well." After a couple of months of thinking we had this parenting thing down it happened. Our baby quit her schedule. Actually I think she ripped it up and threw it in my face. She did not need sleep anymore. I think I could actually hear people laughing at us.

At first I told myself that it was just a stage. Maybe she was getting teeth already? Maybe she just needs her mother more? Well, this must be the longest stage in history because at almost three we are still having problems. I am not sure how many times I have promised to never brag again.

After scouring the internet and admitting defeat to my family and friends; I felt like I had some really good suggestions. We tried letting her cry it out. We failed miserably. That girl is stubborn. She doesn't give up easy and I think she thought of it as a challenge. Then we tried her swing. We had great success until she grew out of it. Then I did the unthinkable. I brought our daughter into our bed. (Gasp!) The first couple of nights weren't so bad. We were actually getting the sleep we so desperately needed. Then it started. I was startled awake by a now one year old kneeing me in the back. Shortly after I was slapped in the face by my daughter. She was still sleeping soundly while I was being beaten. Of course she didn't leave my husband out of the beating fun. He too was startled awake by tiny fists and knees. Well, I am sure you can all imagine how that went. So, we were back to crying it out only to fail miserably. We succumbed to our little boss and let her sleep with us. That went on for way longer than I care to admit.

At the ripe old age of two our daughter received her first twin bed. The bed was placed in her room with the hopes that she would sleep in it. The first night after our purchase we planned on having her start her new life in her new bed. She ended up falling asleep on my lap on the couch and then I put her in her bed. I expected her to awake immediately and run for our bed. Then the unexpected happened. She actually rolled over and went back to sleep! You would think that I would have been overjoyed by this. Well, you are wrong. Instead my daughter's whole like flashed before my eyes. In the time that it took me to get downstairs I was already envisioning her wedding and the tears were flowing. My husband thought I was crazy and I was starting to agree. This wonderful night that we had been looking forward to was happening and now I am crying tears of sadness instead of joy? It didn't make sense. I just kept saying "She is such a big girl now." and "She doesn't need me anymore." I was convinced that she would quit breathing or something and I wouldn't be there to save her. Well, at 3:00 a.m. she decided she needed me because I woke up with a knee to the back and a finger in my ear.

Since my daughter has had her own bed she has spent a lot more time in it than I ever imagined she would. We still have plenty of hard nights but all in all it is going way better than I ever thought. I purchased a handy-dandy nightlight that projects stars and moons onto the ceiling that most nights puts our daughter into a sleepy trance. There are even some nights that I put her to bed awake and she falls asleep on her own!

My best piece of advice is to do what works for your family! I cannot stress that enough. It is great to get advice and try different methods but in the end you need to do what works for you. Some nights you just need to sleep and if that means you will have an extra person in your bed so be it. No one knows your baby better than you. You will get through the sleeping drama and live to tell about it. Another piece of advice is to not brag about your baby being a good sleeper. It will come back to haunt you. 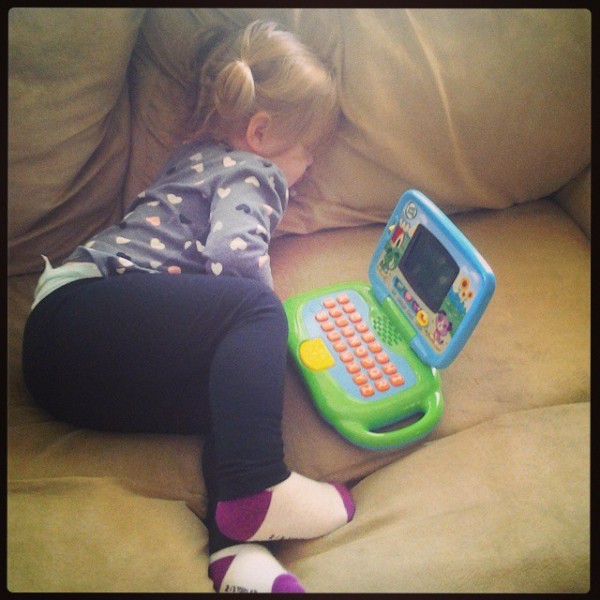 Welcome to my World
> See my posts
> Visit my blog

I am a stay at home mom to my daughter that is two and my son in Heaven. I also have a step-son who is 15.I am in my second year of remission from Cervical Cancer. I was diagnosed when I was 30 weeks pregnant with my daughter.

How To Successfully Transition Your Child To A Big Kid Room...Or Not
Yes I Co Sleep With My Kids
Putting Lack of Sleep into Perspective
advertisement

How To Successfully Transition Your Child To A Big Kid Room...Or Not
Yes I Co Sleep With My Kids
Putting Lack of Sleep into Perspective