Why You Should Stop Preparing for Parenthood

Published by Shelly Mazzanoble on August 15, 2016 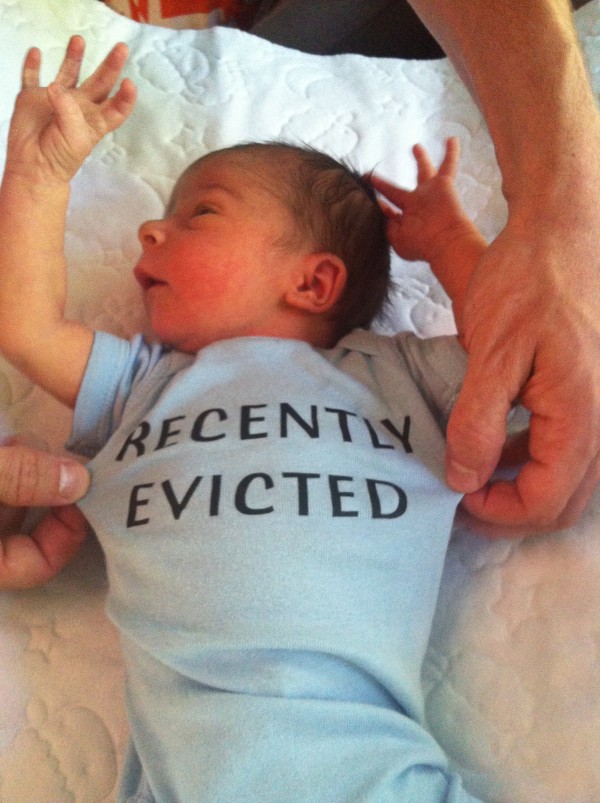 Four minutes after confirming my pregnancy, my husband and I realized we had twelve minutes of baby experience between us.

“Should we have talked about this?” I asked.

“Eh,” Bart shrugged. “You can learn anything on YouTube.”

Truth was, we were terrified. We didn’t even really like kids. Having one of our own seemed like a big risk. The quest to learn began immediately. We were sponges, lapping up knowledge at the trough of parenthood. Those who had been there done that became sages worthy of revere and esteem. I welcomed their advice the way my ever-expanding waistline greeted maternity jeans.

“They get their hair cut and pay taxes and grocery shop,” we marveled. “How do they do that with a child?”

How? You don’t even have to ask. Those who have traversed the parenting landscape must tell you of their travels. It’s like part of their recovery or DNA or something. They survived the drive home from the hospital. They went two hundred and eighty one days without three consecutive hours of sleep. They waded through vomit, dodged geyser-like fountains of urine, and pumped gas oblivious to the poo streak on the back of their calf. They lived to tell and live to tell. New parents suffer from a form of PTSD—postpartum telling of sordid details.

As the weeks ticked off and Quinn grew from a lemon to a turnip to a rutabaga, the tales got taller. Yet each ended with the same verbal equivalent of a cluck on the chin.

“Oh wow,” I said, offering the obligatory awe and reverence. “I sure hope so!”

I developed a love-hate relationship with these war stories. I’m a sucker for an embellished saga of woe that makes you roll your eyes and say, ‘I’m so glad that’s not me.’ It’s the same reason I follow every Real Housewife on Twitter. But I hated how parenthood was compared to war. Was it really going to be that bad?

I grew bigger as did the confessions. I was a waddling target who couldn’t escape them and they knew it. I learned ho to identify the passing of a mucus plug, the soothing joy of lanolin cream, and the best ever home remedy for the hemorrhoids I didn’t have, but was assuredly going to develop, all while standing in the company kitchen waiting for my three cheese penne to heat up. Can we just instate a new etiquette rule? Let’s not ever utter the words mucus plug twelve feet from a microwave.

Then the bull’s eye came in the form of a six-page manifesto from a male co-worker detailing the pros and cons of the leading bottles. “My wife, Ashley has unilateral nipples,” it read. “We found Nuby’s Natural Touch Nipples most resembled her one short nipple and thus alleviated any nipple confusion.”

Umm, okay. First, off I’m so going to get called into HR for opening an email with this many occurrences of the word "nipple." Second, how will I not think about Ashley’s one short, stubby nipple when I see her at the annual holiday party?

Clearly there was a lot for us to learn and not a lot of time to learn it. Rather than rely just on the candidness of strangers, Bart and I signed up for the childbirth prep classes the hospital offered. We kicked it off with infant CPR, a two-hour class I watched mostly through a veil of fear tears. Our house, cat, dog, car, bathroom sink, basement stairs and about nine million other things in our natural environment were all conspiring to kill this poor child. The class ended with the instructor telling a story about a volunteer EMT who failed to remove a popcorn kernel lodged in his two year old’s airway.

“Go home and study your pamphlets!” she said, waving us off. “You’ll figure it out!”

“I feel like I just stared in a Scared Straight video!” I cried in the elevator down the parking lot.

Bart, my brave and stoic rock, put his arm around me, partially out of comfort, partially to keep me upright. “I give our child a thirty-three percent chance of survival.”

What was that old adage? Ignorance is bliss?

But the learning continued. We chased knowledge like a fifth generation Ivy Leaguer chased their legacy. More classes. More videos. More what to expect now that we were expecting. Quinn was an eggplant, a cabbage, a large head of romaine lettuce. This train had only one stop and it was roaring towards the station.

And then it happened, just as they books and instructors said it would. The intangible vegetable became a tiny human and all the reasons for the fear mongering and sensationalizing and nipple talk was swaddled up into a tight little package and handed over.

I didn’t know if he was referring to me or Quinn.

And then the tensest moment of our seventy-two hour journey as parents happened: The drive home. As we gingerly laid our bundle of joy upon the midori green fabric of the car seat and strapped him into the five-point harness for maximum comfort, he began to scream. Seconds later, I followed suit.

“OUR CHILD HATES HIS CAR SEAT!” I screamed. “WE WILL NEVER BE ABLE TO TAKE HIM ANYWHERE! We can’t leave the hospital!”

Bart called the nurse because, well, we could, and clearly this car seat who’s make and model was deliberated on longer than our child’s name, was defective.

“He doesn’t hate it,” the nurse, explained. “This is all just new to him.”

Then she patted me on the arm and said, "Don’t worry—"

Is there a money back guarantee if we don’t figure it out? There aren’t enough YouTube videos to help us figure it out. But moments later, as the nurse predicted, Quinn stopped crying and fell asleep in his car seat. He stayed like that the whole way and the first two hours in his new home.

It was then I had an epiphany. I saw my future and it wasn’t horrible. (Then again I also saw the cat wearing a fez while wheeling a cotton candy cart across our living room so there’s a strong chance my epiphany was influenced by painkillers.) Regardless, watching Quinn asleep in his car seat, skinny limbs protruding from the “Recently Evicted” onsie I bought for this very day, made me realize “You’ll figure it out” is just a euphemism for “No one knows what the hell they are doing.” Those first few weeks with a new baby are like waking up on the set of a Japanese stunt game show. “Here! Put on this foam suit and try to keep this tiny, helpless human alive while we hose you with mud and pelt you with medicine balls!” But even a Japanese game show goes to commercial break.

It’s not us, it’s them for sure. Diaper changes equal waterboarding one day and the next your sweet little infant will fall asleep on the changing table. Peas are the food of the devil on Monday and the stuff dreams are made of by Wednesday. One week naps are as elusive as Sasquatch and the next more scheduled than the German train system. What worked one day, may not work the next and there isn’t a book or instructor or YouTube video that can predict the predilections of your newborn.

The war stories were just that—stories. They’re not advice, but rather a badge of honor. They figured it out. No matter that there would be entire weeks when it feels like you’re living in someone else’s body, or that you’re the only sober adults awake at 3:30 AM on a Tuesday or that there was a time without nipple shields and Velcro sleep sacks, we would figure it out too. Or rather, wait out Quinn while he figured it out.

And now I have my own war stories. I also have advice. Humor the veteran parents, but don’t bother retaining their advice. Having a baby is something you can never be prepared for. He or she is moving in with you whether your hospital bag is packed or your medicine cabinets are filled with Tuck’s pads and lanolin, or the dust ruffle that matches the sheets that matches the wallpaper arrives in time. It’s a lengthy process, but you will figure it out. We’ve already upgraded Quinn’s survival rate to forty-six percent.

Car Seats and Premature Babies: Coming Home
It happens to all of us!
Warning: Learning Curve Ahead!
advertisement

Car Seats and Premature Babies: Coming Home
It happens to all of us!
Warning: Learning Curve Ahead!