Why We're So Scared That Our Child is Average 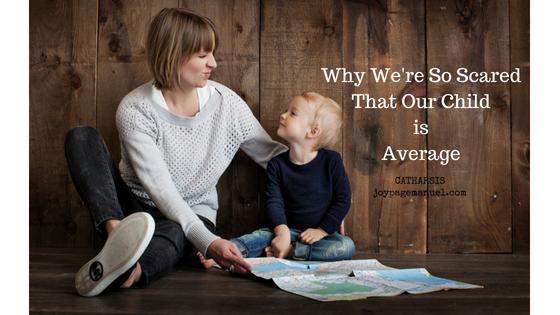 It's only been a week since school started and I'm already exhausted. And I'm not even the student, although it feels that way sometimes. Year after year, I find that the stress I feel as a parent of a school-aged child is far worse than the stress I had while in graduate school. (Except of course for that time I was finishing my master's thesis and preparing for the defense).

It's the emotional stress. Perhaps it's because I know I'm responsible for someone else's well-being, that I'm the one who should know better and the stakes are much higher. Some days, I'm just not so sure of myself. Certainly all of that self-doubt applies to any aspect of parenting. But there's something about the academic environment that completely hurls me into a complicated vortex of deep-seated insecurities and guilt-ridden voices. Am I not parenting right? Should I be stricter? Am I not spending enough time teaching him? Should I have ordered that expensive workbook from Amazon? Did I not pass on the right genes???...

My son Noah is an eleven year-old 6th grader. This is his first year in middle school. In elementary, he's been a consistent straight-A student. Most of you would say there's really nothing for me to complain about. And I agree...sort of.

I remember when we first moved here, a mom approached me and started chatting with me about the school and how impressive the system is, and that we're very fortunate to be in the school district we're in. Her son is a little older than mine and I was happy to receive all her tips and insights. It didn't take long for her to volunteer the information that her son was in the 'gifted program'. She didn't elaborate but it was obvious that she wanted me to know that her boy was 'gifted'. I remember feeling confused because the boy didn't strike me as anyone special. I didn't bother clarifying what she meant by 'gifted' because I didn't want her to feel challenged or insulted. I let it go, but in my mind I was thinking, "Could it be that her definition of giftedness is different?"

Every time I think of that mom, I'm forced to confront one resounding question: When did being average become so bad, so inadequate, that parents seem to go out of their way to avoid having their children be labeled as such?

These days, everyone wants to be 'exceptional'. Childhood has become so competitive, so cut-throat, courtesy of 'success'-obsessed parents who want only the 'best' for their precious children from pre-school to university and beyond. I am guilty. Though I acknowledge that my son is not 'gifted', I am guilty of pushing too hard at times just so my son can be spared from wading in the 'average' pool.

I know what 'gifted' looks like. Through the years, I've met a few kids from my son's school who truly deserve to be in that group. These are the ones who really excel in math and deserve to be in advanced classes. They're brilliant kids who, no doubt, are genetically wired to be intellectually exceptional.

My son does not fall into that category. He is average, or above-average at best; has gotten good grades and awards, but no, he is not gifted by any means and he knows this. More importantly, he's okay with this. He noticed how all the gifted kids are now in the same homeroom and since he's not with them, he arrived at the conclusion that he is probably a step or two down from 'giftedness'.

This put me in a bad mood. Actually, I'm closer to the vicinity of 'insecure' and 'miserable', than just plain 'bad'. But the question is why? I've had to confront that painful question especially after seeing that my son is perfectly fine with his self-assigned status and identity as a non-gifted, average, normal student. Why does it bother me when it doesn't even bother him?

The answer obviously lies in the fact that I've become overly-invested as a parent. When you find that you're more affected than the person who's truly involved in the situation then that means you've put yourself in a place where you need not be. You've overstepped. You've crossed some boundaries.

Upon realizing this, I did what any modern day person does when faced with something you are initially in denial about: I Googled it to seek clarification.

And you know what happens when you Google the terms 'over-invested parents'? You'll find that the first article that appears is entitled "How To Land Your Kid in Therapy". (A must-read, by the way!)

If that doesn't scare you enough, then clearly you need serious help.

It needs to be acknowledged that a big part of the reason why most of us parents have become so overly-invested in our children's lives, especially in academics, is because we've projected so much of our selves on to them. We've convinced ourselves that their success or failure is a reflection of our own gifts, dedication, as well as our follies. We burden them with our own aspirations and angst, while in the process damaging their confidence and sense of autonomy and accountability by over-protecting them from failure, disappointment and pain—the very things human beings need in order to build wisdom and strength of character. But we forget that. Even if we ourselves were lucky enough to have been allowed by our own parents to thrive in adversity, we forget all that mainly because we have become so focused on the competition, on how 'others' must be doing it too, so we can't be left behind or left out. We forget that finishing first isn't always good. We forget that there are different paths to success. We forget that 'success' has different meanings for everyone. We forget that our children's happiness lies in them finding themselves, their own passions and learning self-love. Hovering, pressuring, focusing on perfection and protection from failure extinguish that path to happiness.

I'm unquestionably a guilty parent. I have not only treated my son as an appendage, but worse, I've considered him as my do-over which is why I tend to take things very personally. 'Average' hits me hard because that has always been a demon I've battled with through the years. It's my own issue of wanting to be special, to stand out, to overachieve. I've made it about me, instead of about my son. In so doing, I may have placed unfair standards for him; standards that I did not even meet myself when I was a student. I was never in the gifted group. I did not graduate at the top of my class. I'd even say I wasn't in the top 10. Top 20? 25? Perhaps, but I honestly don't know. I was a good student and had good grades, loved the academe but I would never call myself 'brilliant'.

And those classmates in elementary and high school who had lower grades than I did?...They still went on to good universities and are even far more successful than I am now in terms of their job titles, salaries and professional connections. No one remembers grades and GPA's. What we remember most is whether someone was a good person, someone you can respect, or if they were pretty much an a**hole, a conceited one-upper, a cry-baby or a spoiled brat.

I don't want my son to aim for perfection. That's an unrealistic goal.

What my husband and I truly desire for Noah is to reach the best version of himself, and therefore find happiness. And he can only reach that if he lives with integrity and compassion.

We want him to learn resilience and self-confidence—to make mistakes, fail, and then learn to get up on his own, dust himself off and then do better.

We want him to have grit—to persevere and experience the truth that it takes effort, time and commitment if you want to achieve your goals.

With all that we dream for our son, it's clear that it just doesn't matter whether he's the smartest in his class or not. As long as I keep it about him and not me, as long as I stop making this about my past and present insecurities but instead focus on his life and his future, then it becomes easier to relax. It becomes easier to see that he has a million other gifts that we should be truly proud of. I'm certain this is true of every child.

I'll always be here for my son to guide him, and still let him know that our expectations of him are high, yet realistic. We're here to teach him as much as we can, not to make him crippled but to make him equipped for adulthood. As parents, we can do all this without hovering and having our shadows cast a darkness over our child's path. Children need as much light and space to thrive. Let them be children. Meet them where they are.

Never forget that every child, average or not, deserves nothing less than exceptional love from us parents...the kind of love that brings out the best in both the lover and the beloved. If we truly say we love our children, then let's not burden them with our restless frustrations and psychoses. Love them with hope, not expectations; love not from a place of lack and fear, but of fullness. Our children deserve no less.

*This post was originally published on Joy's site, Catharsis. http://www.joypagemanuel.com/2...

Joy is a writer, blogger, hopeless romantic and full-time over-analyzer who lives in Middle Tennessee with her husband and son. She was born and raised in the Philippines and was an academic who taught Sociology in that past life. You can read more of her on her site Catharsis where she writes about navigating the world of parenting, mid-life angst and everything in between.

Back to School - The ADHD Way
​My Kid Failed The Gifted Test. Guess What? I Don’t Care.
Pointers For Parents: Letting Your College Freshman Go
advertisement

Back to School - The ADHD Way
​My Kid Failed The Gifted Test. Guess What? I Don’t Care.
Pointers For Parents: Letting Your College Freshman Go