Published by Jennifer Landis on October 2, 2017 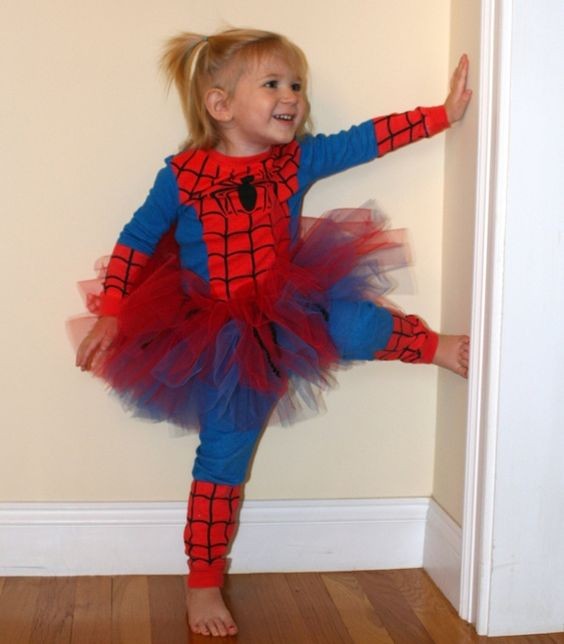 Halloween stems from a cultural celebration of the late harvest and the keeping away of "bad spirits." Today, children and adults alike dress up in costumes for Halloween. Letting your kid dress up for Halloween as "anything you want, kiddo" is an exercise in your promise that "you can be anything you want to be when you grow up, kiddo."

So what if your littlest boy wants to be Tinkerbell while your oldest girl wants to be Peter Pan. So what if your twelve-year-old boy wants to dress up as a witch for their last adventure in trick-or-treating. Does that mean your child is going on a gender bender or is basically a crossdresser for Halloween? Seriously?

When it comes to gendered costumes, I take a position of indifference. It's so a century ago to have a tantrum about gender roles, especially when the spirit of Halloween is about play, costumes, masks and identity.

It's totally cool to dress your little girl as Spiderman for Halloween. Spoiler alert — my kid had a blast last year, and that is what matters.

The Power of Being “Anything You Want”

What does it say to your child, when "anything you want to be, kiddo" turns into "anything but THAT?"

Your acceptance of your child matters at every stage, and as you age, your adult sense of well-being and emotional security depends on the perceived quality of your relationship with adult attachment figures. You may not agree with all of their choices, particularly when they become adults, but even the simple autonomous choice of picking out a Halloween costume is an important part of your relationship.

It's hard for some parents to be supportive and indifferent, but your discouragement can crush your child. If your kid can be a dinosaur, an alien and Bugs Bunny all in one afternoon, why can't your little girl be Spiderman for a single day?

Dressing the Young Age-Appropriately for Halloween

What if your daughter wants to dress too old, such as a nine-year-old dressing up as Vivian Ward from "Pretty Woman?” Vivian Ward is an intelligent young woman, but she was also a prostitute in the film — a choice a college feminist might pick for Halloween. You want your daughter to be comfortable with her body, but dressing a young girl in revealing clothes that at bare minimum a seventeen-year-old might wear isn't age-appropriate.

The best scenario here is to find out why she admires this character and see if there's another way to honor that feeling at another time. Have your child make a verbal or written list of other characters and pick another with those admired traits. Challenge your child to construct a costume from items at home. Gender-bending Spiderman is perfect for the spirit of Halloween, but daughters need time to grow up before picking "sexier" costumes.

Conversations About Peer Pressure During Halloween

Girls dressing like boys is socially acceptable as a "tomboy" and even endearing, but there's no equivalent for young boys. Unfortunately, boys may be more likely to experience judgment for a "feminine" costume choice. Parents express outrage over commercials where a mom and a toddler boy laugh and paint his toenails pink, even though experts say it’s fine if a boy wears a pink tutu. No developmental catastrophe has been committed. What if he loves Wonder Woman as much as he loves Batman but wants to be Wonder Woman this year for Halloween?

In Shakespeare's time, the opposite was true. Men played the female roles in Shakespeare's plays, and it was not socially acceptable for women to play the roles of females in plays. Every social role must be played for society to function, even during Halloween, right? All the status quo boxes of double standards must be checked — big-little, up-down, male-female, rich-poor and dark-light must be in balance, or the sky will fall.

Perhaps Halloween is a time for a young person to experiment with gender roles from innocent curiosity to a more serious interest, but that certainly doesn't mean dressing your little girl as Spiderman will change their gender — or that it should even matter.

Unfortunately, your child will face peer pressure and judgment as they grow up. It's important to empower your child and talk to them about bullies because bullying can be an outlet for anger, sadness or other worries at home. Your child will make friends who appreciate who they are. Let your child know that no matter what, they can truly be anything or anyone they want to be.

The power to be anything is central to a child's imagination, and parents should nurture rather than shun it. Sometimes a costume choice is the assumption of a powerful role or an expression of another part of one's identity. Sometimes it's just fun.

It could be all of the above. Allow your little girl to be Spiderman if she wants to — it won't pose a risk to her development. Instead, she'll feel cool, powerful and like she can do and be anything she imagines, using her spidey senses to rock the world.

How I'm Determined to Make Halloween Better for My Kids
Halloween Fashion Circuit
Halloween Is Almost Here: Are You Prepared?
advertisement

How I'm Determined to Make Halloween Better for My Kids
Halloween Fashion Circuit
Halloween Is Almost Here: Are You Prepared?