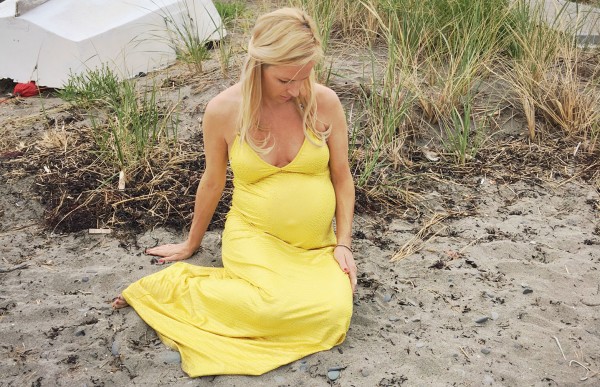 I was sitting with some good friends at a baby shower talking about a maternity photo shoot that would take place for the mama-to-be. It hit me hard that at 7 months pregnant with my third, I never had professional maternity photos taken. It got me thinking. Would this be my last chance? Should I just haul out the trusty tripod and take photos myself? Or perhaps I should bite the bullet and hire a professional?

Which makes what happened next a bit ironic and just a little bizarre, to say the least.

In the short term I forgot about the conversation and the possibility of having maternity photos taken altogether. Not surprising! If you’ve been through a pregnancy or two or three you can relate to the fact that short-term memory fails you hard. But when I got home, logged into Facebook and looked at the top of my feed, this post stood out: 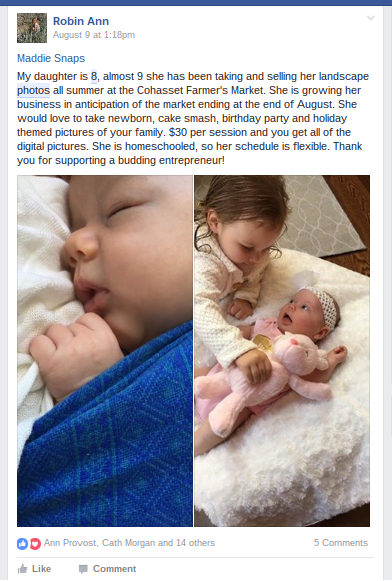 Call it fate or call it crazy… I reached out. My explanation? Frankly it was pure curiosity paired with a what-the-heck attitude – another common feeling that creeps up around the final stretch of pregnancy.

My decision didn’t feel strange at all until I started telling a few people. In hindsight, their reactions were pretty funny. My husband gave me the immediate *what?!* look with his forehead all scrunched up, which told me he was definitely thinking *she’s lost it*. Others gave me an even more blatant *wait… what?… why?* look. And the best was the deadpan “Oh, that’s so cool” response that was the polite way of saying *that’s the stupidest thing I’ve ever heard*.

Needless to say, I started to have second thoughts about my upcoming maternity photo shoot. What am I thinking? She’s eight.

In the end, though, I said screw it and showed up anyway, but still with the assumption that I would be greeted by a child prodigy. I imagine this new idea was due solely to my own insecurities surrounding my decision.

But when I met Maddie that morning it became very clear to me that this was in fact a very typical 8-year-old girl. I was greeted by her mother while she played in the distance with some rocks. Her mom called for her and I watched as she skipped toward us, kicking sand along the way. I could tell something unique was going on in her mind; her imagination in full spin.

From then on, most of the activity of the photo shoot was prompted by her mother and I quickly discovered a few obvious things:

“You look like you’re mad at the baby!” she blurted out while laughing hysterically.

She then proceeded to show me the shot. She was right. I was mad at my belly.

She then laughed again and said, “Wait, that’s a great idea! Pretend you’re mad at your belly!” 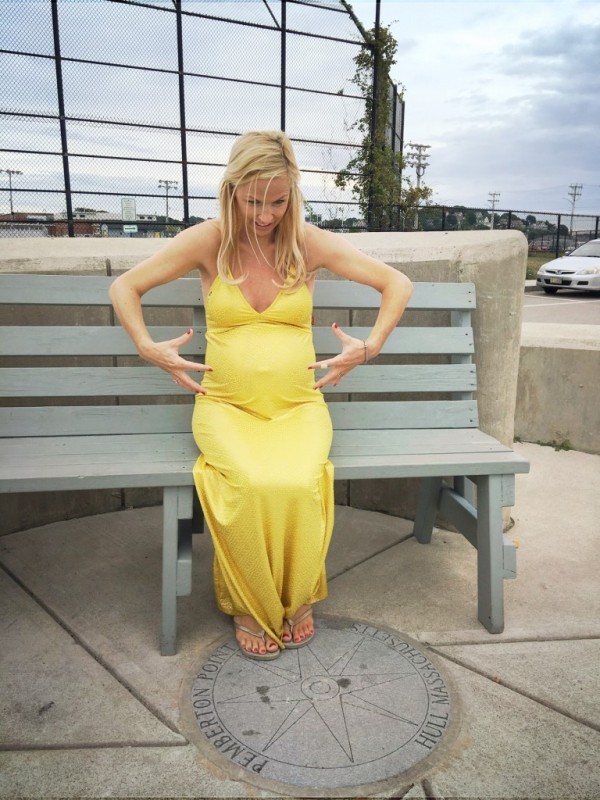 After realizing that I was taking myself too seriously, I began to let go and quickly found myself falling into this child’s world as she pointed me from spot to spot, dodging our suggestions (her mother’s and mine) and giggling along the way. 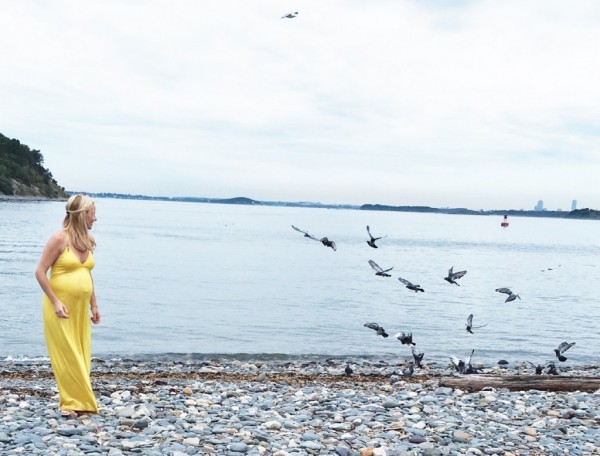 “Okay, now go sit on that log with the pigeons,” she exclaimed in excitement. 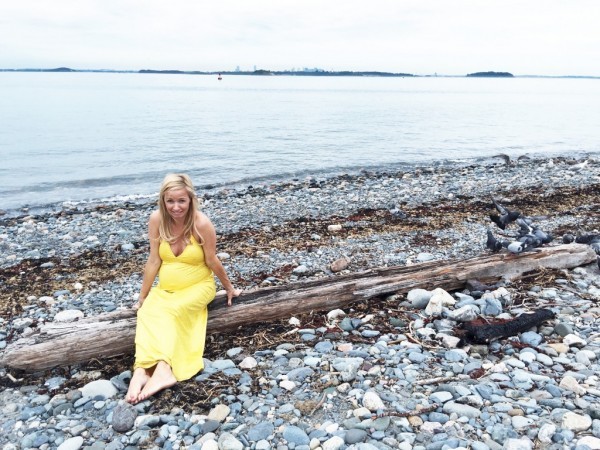 I approached in horror, feeling like the true bird lady. They swarmed around me, almost mocking me, knowing that the log Maddie had pointed me to was covered in their poop.

I left that morning with an acceptance regarding what had transpired – this was all play for Maddie and I was her playmate for the day. The odds of any of the photos coming out gorgeous would be slim to none. It didn’t matter, though, because I had so much fun. When I got home I actually took out the tripod and snapped a few shots just because my doubt was in full effect and I felt weird about taking off my dress without getting a couple of good shots.

Only a few hours later I felt my phone buzzing with emails flooding in – all from Maddie’s mother. The photos were ready!

One by one I opened the files. By the third photo I was literally drenched in tears. 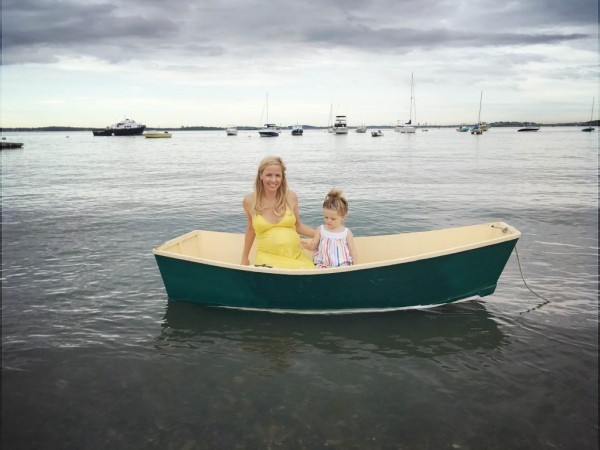 Somehow, this child had managed to capture not one, but several perfect moments. 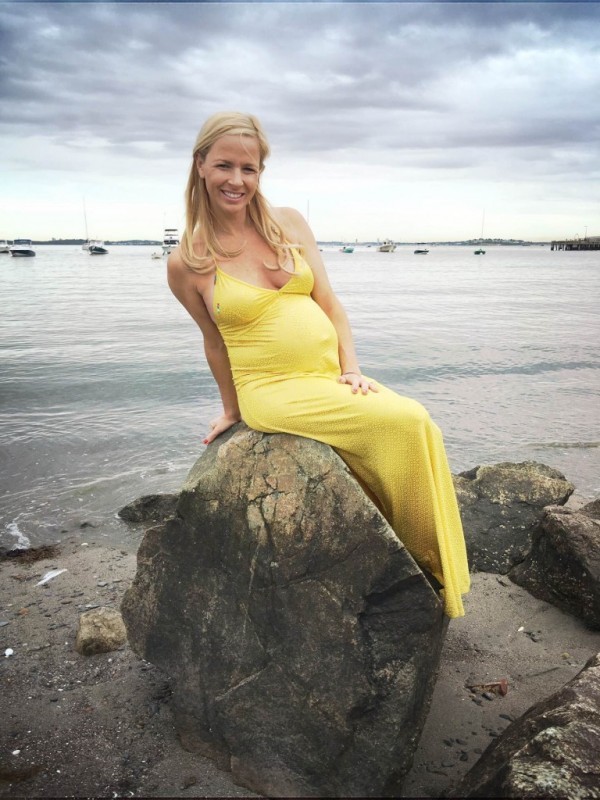 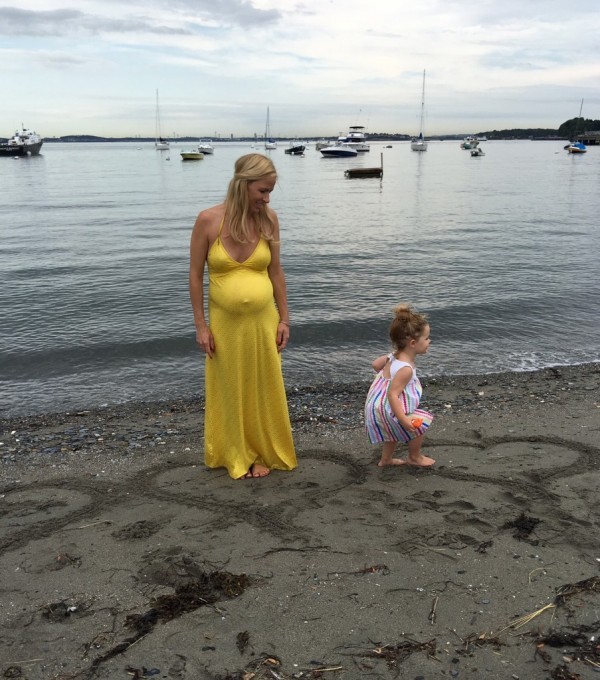 Maddie suggested we create three hearts in the sand to represent my (soon-to-be) three children.

As I looked through the photos, my entire perception of what had transpired that day became clear and what I learned was no longer just about this 8-year-old budding entrepreneur. I learned so much more. 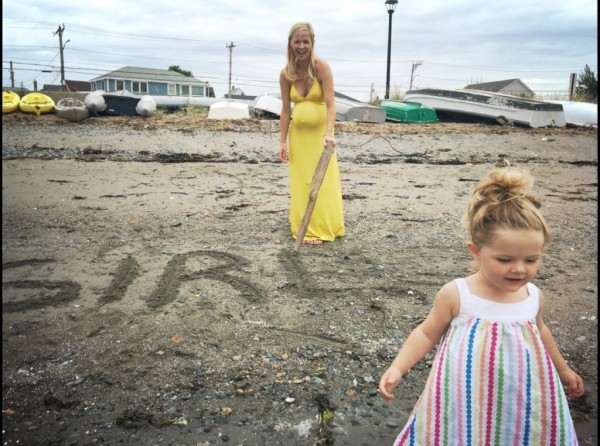 2. There was a very specific reason I decided to bring my daughter along that morning. I just didn’t know it at the time. 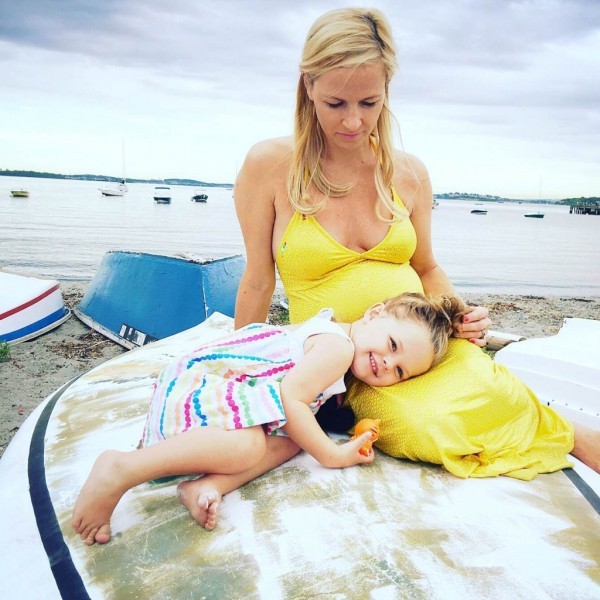 My sweet Elle taught me how to be a girl mama. Her sparky personality, love for animals, hatred of brushes (leading to legit dreads), and magical imagination has taken us for such a ride. Soon she will no longer be my only girl and while she’s way more into doggies than babies right now, I’m so proud to say that I can already tell how amazing she will be as a big sis. 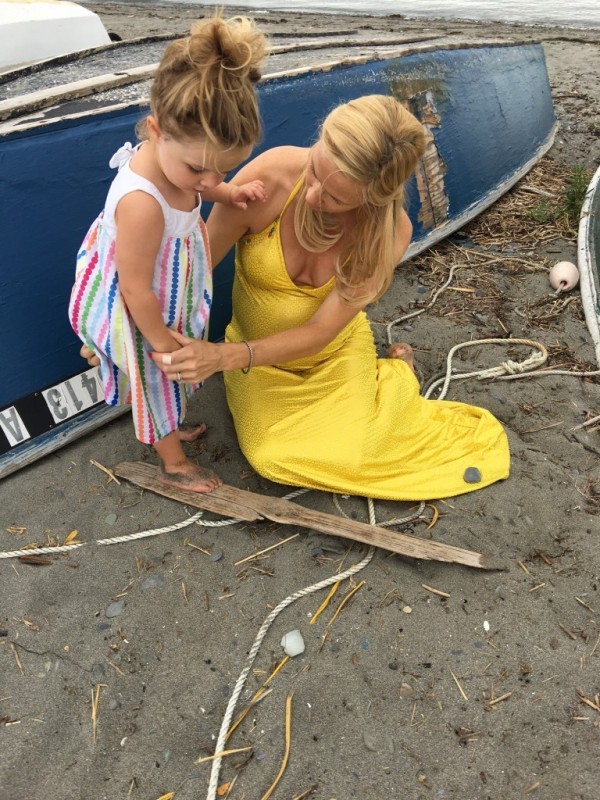 3. The perfect shot is not necessarily achieved by taking more than one photo. 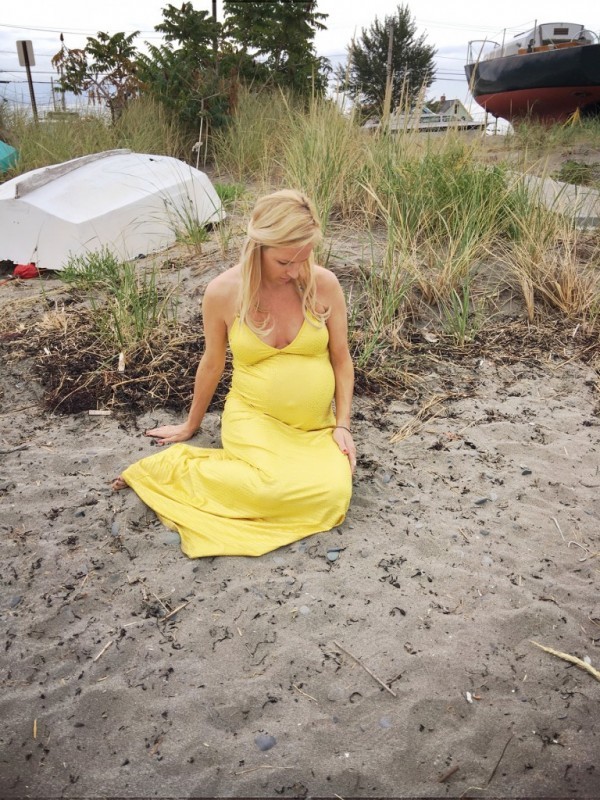 4. Doubt is a learned behavior that can turn you sour with age. 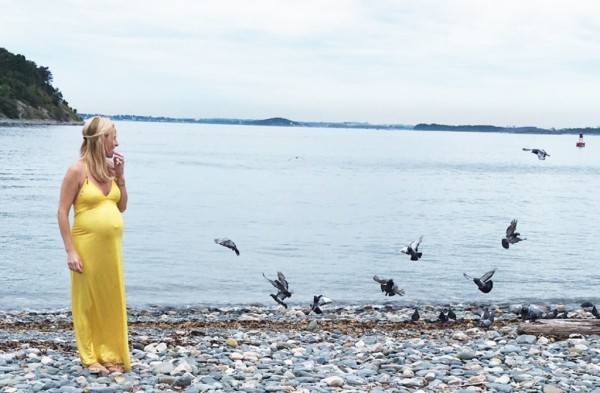 5. When you let go of control, wonderful things can happen. 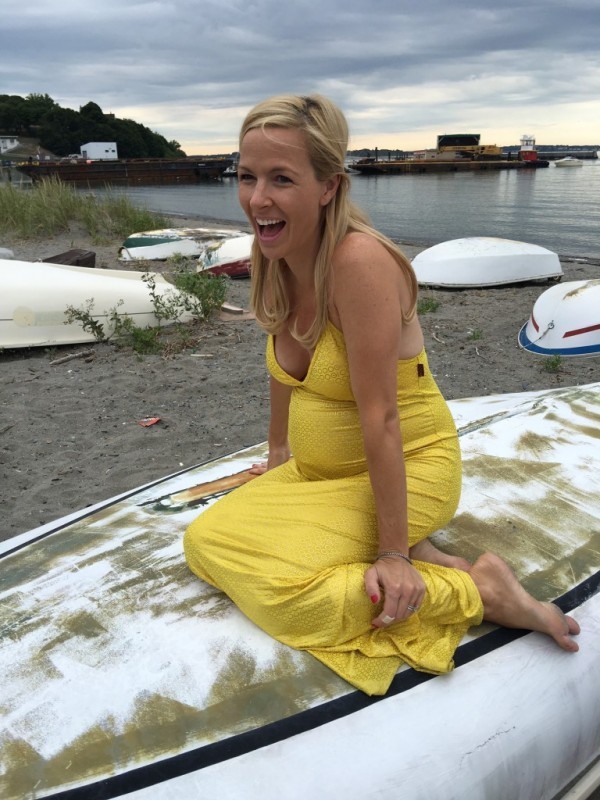 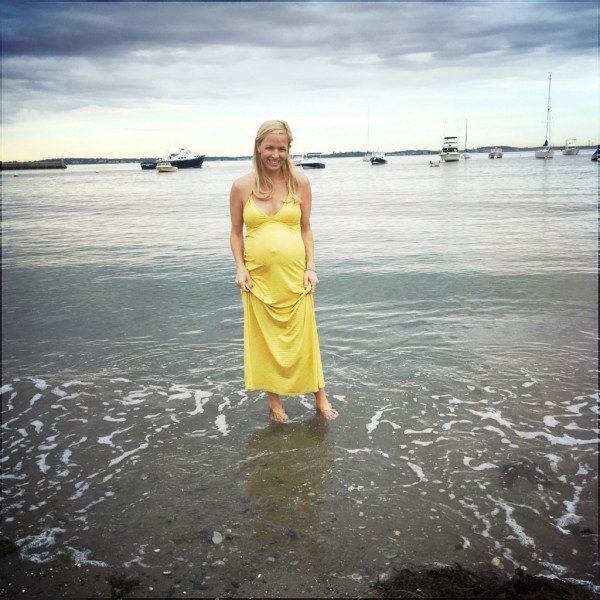 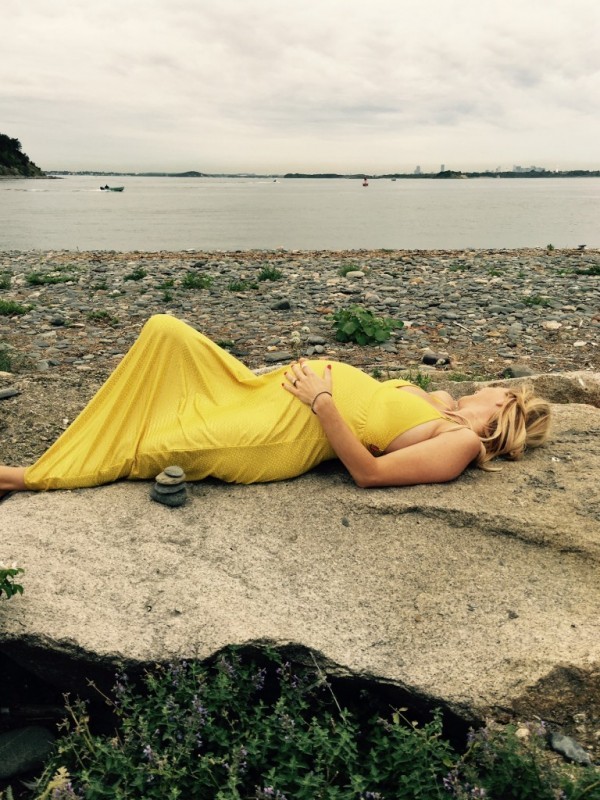 6. Being given the opportunity to see yourself through the eyes of a child is a gift that most will never experience. 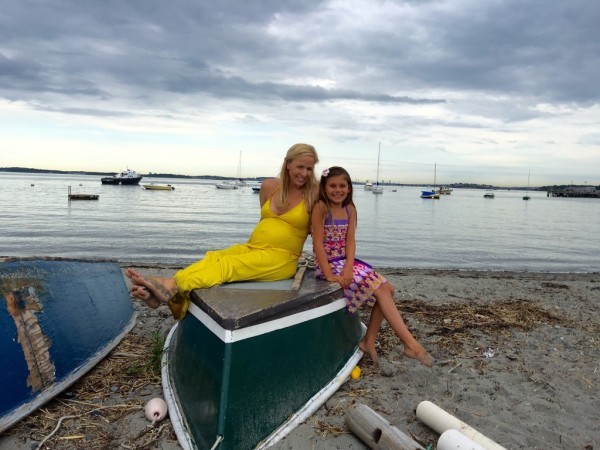 And for that, I am forever thankful to my new 8-year-old friend behind the lens. 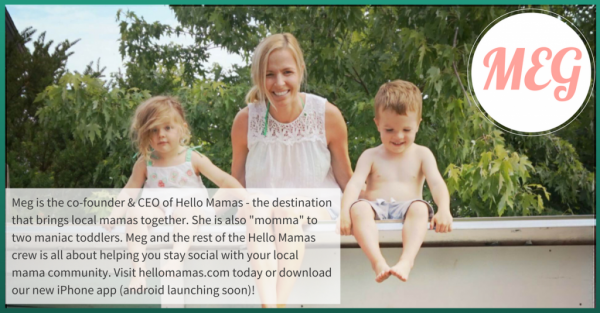 Meg Gerritson is the Co-Founder & CEO of Hello Mamas, the leading global destination that brings like-minded local moms together for playdates and support. Visit hellomamas.com or download our app for iPhone and Android.

Let me tell you about this photo...
SIX WAYS TO GET YOUR CHILD THROUGH A STRESSFUL SITUATION
I Didn’t Think I Wanted Photos Of My Stillborn Baby And I Was Wrong
advertisement

Let me tell you about this photo...
SIX WAYS TO GET YOUR CHILD THROUGH A STRESSFUL SITUATION
I Didn’t Think I Wanted Photos Of My Stillborn Baby And I Was Wrong