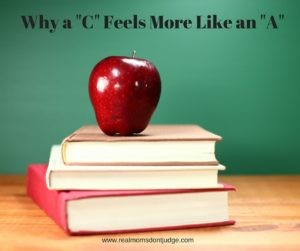 "Mom! Mom!"My daughter's voice startled me as she screamed and bounded up the stairs. “Mom!” she shouted again and again.

Was she excited or was she terrified? Yelling is out of character for her so I quickly set my computer aside and stood up as she hurled into my room.

She's in her third year of college* and was home for Christmas break. I'd felt the heaviness of her anxiety daily since she'd been home as she checked the internet in anticipation of her final semester grades. Inwardly, I was anxious, too.

“My grades came in!” As the words spilled off her lips, my heart accelerated to a pounding, and I steadied myself trying to read her, not knowing whether I would need to console or congratulate.

Semester's end. No biggie. She's in her third year at the university. She's diligent, hard working and conscientious. She attends class, tries hard, and completes all assignments.

Why would semester's end produce anxiety in a student like that? Normally, I suppose, it wouldn't. But, college, for my daughter, was only supposed to be a pipe dream, a carrot beyond her reach.

Something other people would do, but something she would only dream about. She's 5'8", slim, beautiful. Not a visible mark on her body. If you passed her on the street and exchanged pleasantries, you'd never suspect a thing. But she has scars no one can see. They're inside her head, seared onto her brain.

My daughter suffers from TBI---traumatic brain injury--which affects every fiber of her being, every aspect of her life-- physically, emotionally and mentally--every single day.

They call it the "invisible injury," and it kills thousands each year. It's called the "invisible injury" because there are no visible changes on a person's outside--no crutches, no wheelchair, no cast, no obvious physical defects--but underneath something is different. It can't be cured, and many times it isn't understood.

Traumatic Brain Injury occurs when a sudden trauma damages the brain. In my daughter's case, a car accident.

According to the CDC (Center for Disease Control and Prevention), 1.5 million people suffer from traumatic brain injury each year, and 50,000 people die from it annually.

They DIE. People die from trauma similar to what my daughter suffered. They're smacked on the head and never awake again. She lived, and for that I'm forever grateful. But, 20 years after the injury, she still deals with its effects, and she will until her days are over.

Our story begins when a driver fell asleep at the wheel, crossed into our lane and crashed into our car traveling at a speed of 80 miles per hour. My daughter was ejected from our vehicle and lay comatose in the hospital for more than three days.

We had just pulled over onto the emergency shoulder and my husband had gotten out of the car and removed her from her car seat minutes before the devastating impact. We were clearly in the wrong place at the wrong time.

Everyone feared a parent's worst nightmare. But, she lived. Her future and all of our lives would be dramatically different.

By society's standards, she's abnormal. I vowed never to apologize for who she is .

While the accident altered the speed at which she processes information, it didn't alter her intellectual capacity or her will. My daughter was a strong-willed, exceptionally bright and creative child.

Before she reached the age of 2, she could recognize letters and numbers as well as write them. In addition, she could identify colors and solve puzzles. She was clearly artistic. We suspected that she might even be “gifted.”

That car accident crushed our dreams. It was difficult to accept in the beginning. She'd done nothing to inherit this misfortune. We aren't the kind of people this sort of thing happened to. Our heads reeled as we struggled to understand.

But, we accepted that our daughter was now different and encouraged her to embrace her strengths. In a society that rewards quick thinkers and academic excellence, little value is placed on those who struggle.

Her value didn't diminish in our eyes. We've never expected less from her even when others did: a reading specialist who asked her if she felt stupid because she couldn't read; school systems that refused to give her services because she was home schooled, even though we were entitled to them; a college counselor who tried to convince her to stop at a 2-year Associate's Degree instead of completing all four years for a Bachelor's Degree,

She's been left out, looked over, and left behind by her peers. But she forges ahead.

Twenty years ago, we didn't have all the information on brain trauma like we do today. Specialist after specialist droned "we don't have much data on this sort of injury. Most people who suffer an injury like this usually die."

So early on, I became a fierce advocate for my daughter, reading everything I could get my hands on about TBI. Many times when consulting with educational "specialists," I was the TBI "expert" in the room.

So we were forced to do what we thought was best for her. I designed my own IEP (Individualized Education Plan) and tailored her education to her needs.

I had a vested interest in her success and in her happiness. I believed in her, I loved her. I refused to put her into a system that would batter her self-esteem and confidence and label her with "can't'" instead of with "can."

As I struggled to find effective methods and techniques to bring out the best in my daughter, I shed many tears and spent countless hours second guessing my decisions. Was I pushing her too hard? Was I giving her what she needed to be successful? Was I holding her back by not putting her in school?

My doubts were compounded by specialists who openly challenged our decision to home school, questioning my credentials and suggesting that I was expecting too much under the circumstances.

When you love someone, you don't expect too much. You evaluate their abilities and you expect exactly what they're capable of and you don't stop until you get it.

She wanted to be a writer and an artist. If a child with verbal communication challenges wanted to be an author, we'd cheer her on.

Each school year, I'd start with a careful assessment of her needs, strengths and areas of weakness. We constantly reminded her that just because she learned differently, didn't make her any less intelligent.

We encouraged her to do HER best and were careful not to compare her to anyone else. And, in the end she thrived because of it.

Argumentation and Debate. A class necessary for a degree in Communication but a tough row to hoe for a student who's challenged by a slowed processing speed and word recall. I know she probably worked harder for her 79.5% than the kids in the class who got A's.

(And, I honestly wondered why the professor didn't give her the half point. But I know that wouldn't have made her happy if she hadn't earned it.)

"Thanks for all your help, Mom!" she said referring to the hours of coaching, counseling, encouraging I'd given her throughout the semester.

"I knew you could do it," I responded with a smile, choking back tears.

Semester-end grades may always elevate my daughter's anxiety level. As her mom, I am the anchor at the other end, grounding her, steadying her, keeping her on course, and cheering her to success. Her success.

Too bad effort isn't measured with a letter grade. If it was, my daughter would get an A+ in my book.

*Note: My daughter lives on campus at a university 45 minutes from home and has full accommodations.

Why a C Feels More Like an A
Life Can Be Better After Tragedy, and Here's How
5 Things We Did to Embrace Summer With Our 12 Year-Old (Before She's Too Cool to Speak to Us)
advertisement

Why a C Feels More Like an A
Life Can Be Better After Tragedy, and Here's How
5 Things We Did to Embrace Summer With Our 12 Year-Old (Before She's Too Cool to Speak to Us)