I remember life before being a parent. I remember being able to stay up late and sleep in. I've always been a morning person so I never really slept in later than 10am anyway but the key was I was waking up on my own. It felt good. You felt rested and could tackle the day ahead because you typically didn't wake up feeling tired. (You might wake up with a different feeling for a good part of the day depending on how late of a night it was #WinkingFaceEmoji).

Sleep as a parent has gotten incredibly harder. Let me explain...

I'll be honest, I never really had it that difficult when our son was an infant. I worked early mornings as I do now and needed sleep so my wife made sure I didn't have to wake up in the middle of the night. But then things REALLY changed when our son became a toddler. He started waking up earlier and earlier and realized his voice carried and that we responded when he yelled. So at 5am on a Saturday morning I'd hear "Daaaaaaddddddyyy!!! Moooommmmy!!!" coming from his bedroom. He wanted OUT of his crib. BUT IT WAS 5. A. M. (Sigh....) Thankfully when we'd go get him we'd bring him back into bed with us and he'd go right back to sleep. Win-Win right? 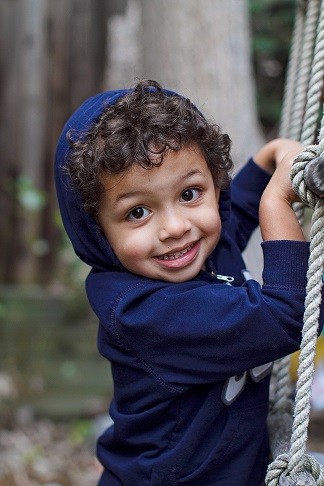 The real sleep deprivation came when we transferred him into his toddler bed. He was obviously walking and this meant he could get up and out of bed whenever he wanted. We were more concerned he would get hurt or into trouble at first. Little did we realize all this new bed meant was that WE wouldn't be sleeping again. Ever. HA!

Now at 5am, our son doesn't have to call our name. He GETS UP and out of bed on his own. He wants to see us so he comes right into our room. BAM! Slams the door open and it bangs against the wall. Kind of like Ricky Ricardo from I Love Lucy when he came home except more like "Daddy! I'm UPPPP!" As a toddler all he wants to do is play once he wakes up, again at 5. A. M. Who doesn't love to play though right? However, while most adults are slow going as they wake up in the morning, he is at 100%, ready to run, laugh and have fun. It's awesome, really, seeing him so happy in the morning, but if it was 5 P-M instead of A-M it'd be easier right??

What's the solution you ask? I wish I had a good one. I don't. The best we've been able to come up with is taking turns. It sounds corny but it works! I swear! My wife and I switch on and off when it comes to waking up and playing with our son at 5am. He loves it! We love the coffee. The other gets to sleep in.

Thankfully since I'm a morning person, I try and wake up early with him more often than not so my wife can sleep. Honestly though, it's tiring. While we do have somewhat of a solution, I've just gotten used to sleeping 4-5 hours a night. You'd be surprised how your body adjusts to less sleep (or maybe just mine?)

Now, we've noticed how our son has finally started to enjoy sleep like a typical human being. He's sleeping in later and later. Sometimes we've even had to wake him up from naps and he doesn't want to get up yet! Overall we're realizing it gets better as he gets older. We'll get a full eight hours again one day! Till then, we're enjoying this age and the much needed coffee that comes along with it.