This first appeared on Lauren's blog, Oh, Honestly, and was read in 2015 at Listen to Your Mother Bangor. Join Lauren on Facebook.

When I was expecting my first child and motherhood grew closer with each passing day, I began to hear a phrase with more and more frequency.

"Life will never be the same," women would tell me. And though I had a vague notion of what they meant, the way they said it, with a strange mixture of joy, wistfulness, and just a hint of warning, made me wonder if perhaps I didn't have a clue. Perhaps my ideas of afternoon snuggles, family play time, and, yes, plenty of hard work were naive. 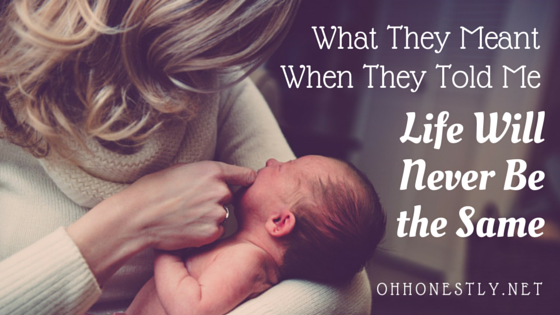 Now I am just days away from my oldest's seventh birthday and I too have said those words to expectant mothers. And now, although I'm less than a decade into this motherhood journey, I know what they meant when they told me life would never be the same.

They meant that my days of grabbing my purse and heading out the door are over. I will never again, at least not for the foreseeable future, be able to leave the house without at least 15 minutes of prep time. And let's face it, even 15 minutes is wishful thinking most of the time.

They meant that I was about to start a job that requires me to be on the clock 24/7 with no sick days and no vacation time, and it doesn't pay, at least not in the monetary sense. In fact, instead of paying me, I'm required to dish out a whole lot of money to do this job.

They meant that I would experience a love like nothing I have ever felt before. One that is so overwhelming it's made me see my life through entirely different eyes. You mean to tell me that my mom loves me this much?? That God loves me even more than this?? I've developed a new appreciation for my parents and a new outlook on my worth.

They meant that I will doubt and second guess every single decision I make, no matter how big or small. I gave my kids pacifiers; their teeth will be ruined. I let my older two cry it out; they'll have trust and attachment issues. I've let my youngest get away with more than the older two; the oldest will resent me, the youngest will be a wild child, and the middle will be the classic overlooked middle child.

They meant that I can have throw up on the shoulder of my sweatshirt and I won't rush to change because my baby doesn't feel good and just needs a minute or two to rock before I clean up.

They meant that the tiniest people, the ones who I love more than life, will also be the ones who bring out my deepest, biggest, most insane emotions. Not the touchy feely ones (we'll get to those). No, I'm talking about the frustration and anger that I never knew I was capable of. Like when I've said to stop doing the same thing over and over and they look me right in the eye and do it anyway. And in that moment I'm sure that my husband will come home from work to find a puddle on the floor and three terrified kids and he'll ask what happened and they'll say, "Mom exploded!"

They meant that one day my two year old will stroke my hair, look into my eyes, and say, "I yuv you." And my husband will come home from work to find a puddle on the floor and three confused kids and he'll ask what happened and they'll say, "Mom melted!"

They meant that the smallest things will now make me cry. Things like changing out the 0-3 month clothes for the 3-6. The day before the kids' first birthdays. Selling the jumperoo. Seeing my picky eater choose to eat a piece of brocolli. Watching them play together.

They meant that I will spend a lot of time wishing for the next stage: "Oh, it'll be easier when he can walk. When she can talk. When they're all a little more independent." But that with each new stage I will find myself wishing the previous one hadn't gone by so fast.

Motherhood changes you, exposes you, rips your heart open, and makes your life more abundant than you ever thought possible. But that's a lot to say to a mom-to-be. So if someone tells you, with joy, wistfulness, and a just a hint of warning, that your life will never be the same, now you know what they mean.

You Will Surprise Yourself!
It's taken me a long time to say this, but I'm proud to be a stay-at-home mom
He Carries the Weight of Fatherhood
advertisement

You Will Surprise Yourself!
It's taken me a long time to say this, but I'm proud to be a stay-at-home mom
He Carries the Weight of Fatherhood