What If Dads Held Press Conferences? 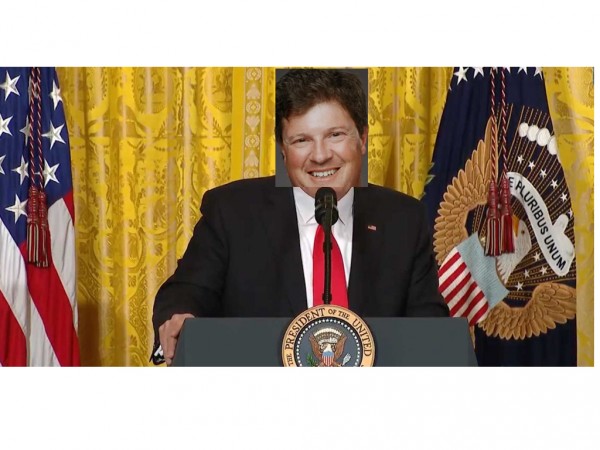 “We now go live to the Schwem house in eager anticipation of a hastily called news conference. Jim, my colleague at CNN is standing by. Jim, the timing of this is rather interesting, would you agree?”

“Absolutely, Brian. We in the news media can never recall Greg Schwem, the family patriarch, engaging in such a direct form of verbal communication. Since approximately 2006, most contact between Schwem and his children, and in many cases his wife, has occurred through text messages and the occasional Facebook post. So, we really don’t know what to expect. Wait, it appears Schwem is approaching the podium. Let’s listen.”

“Greetings. I want to thank everyone for attending. I’ll make a brief opening statement and then take a few questions. Despite many reports to the contrary, my parenting administration, in place since 1997, is still running like a well-oiled machine. Everybody is happy, am I right?”

“I’ll take that silence as a ‘yes.’ Let’s start with a recap of my most recent accomplishments, all of which have been terrific. Despite what the pundits say, my Snapchat rollout was very smooth. I just received bad advice on how to use geometries.”

“Geofilters, Dad. They are geofilters.”

“OK, sit down. Whatever they are, I’m the first dad to use them.”

“You put a geofilter of a wedding ring over a snap.”

“And that was funny. Didn’t you laugh when you received it?”

“I never received it. You accidentally sent it to my boyfriend. Correction, my ex-boyfriend.”

“Whatever. And speaking of boyfriends, I’ve had two very successful meetings with potential prom dates. I will be making my recommendation very soon. Check your Twitter feeds.”

“Chill out, Dad. Prom isn’t for another three months.”

“Well, other daughter, I have always pledged to be a prepared dad. I believe I’m the most prepared-ness dad out there. Millions of others agree.”

“Do you have facts to support that?”

“I was given that information. OK? Somebody told me. And I don’t remember opening the floor up to questions yet. I’m still speaking so pay attention, as I want to announce a scheduling change. I will NOT be spending this Saturday at my weekend residence in the basement watching golf. Instead, I will be watching college hoops. Everybody got that? Good. Now I will take a few questions.”

“It’s your daughter again. Dad, when are you going to take me to get my driver’s permit?”

“I’ll have to look into that. Next question. Yes, the older woman in the back. You are…?”

“Your wife. Thanks for the ‘older’ crack.

“I’m concerned the current administration is not saving enough for college tuition.”

“I’d like to know the specifics. So would our accountant. And, on the subject of saving money, I’d like to discuss emails that have been intercepted pertaining to a ‘March Madness Boys Weekend in Vegas.’ Care to comment?”

“I’ve never had a conversation with any boys regarding Vegas. It’s a ruse. Where are you getting your information?”

“You left your laptop open last night when you fell asleep. We have photos.”

“Look, I’m not mad at any boys. I’ve always treated boys with respect. All boys. Does that answer your question?”

“I think we are done. Thank you all for attending.”

“Well, Jim, that was interesting to say the least. You were there. Your thoughts?”

“Brian, this was beyond strange. He refused to answer some questions, he deflected others and he never took blame for his shortcomings. I think the man is unhinged.”

“I’m just now seeing a tweet from Fox News. And I quote, “Great job by Schwem, who represents clueless dads everywhere and should be commended for his bravura performance”

“Can’t argue with that, Brian.”

Welcome Home From College. When Are You Going Back?
Help!! -- 14 Ways for Moms to Raise Boys
Yes, all of my kids are the same gender — and here's what I wish you knew
advertisement

Welcome Home From College. When Are You Going Back?
Help!! -- 14 Ways for Moms to Raise Boys
Yes, all of my kids are the same gender — and here's what I wish you knew