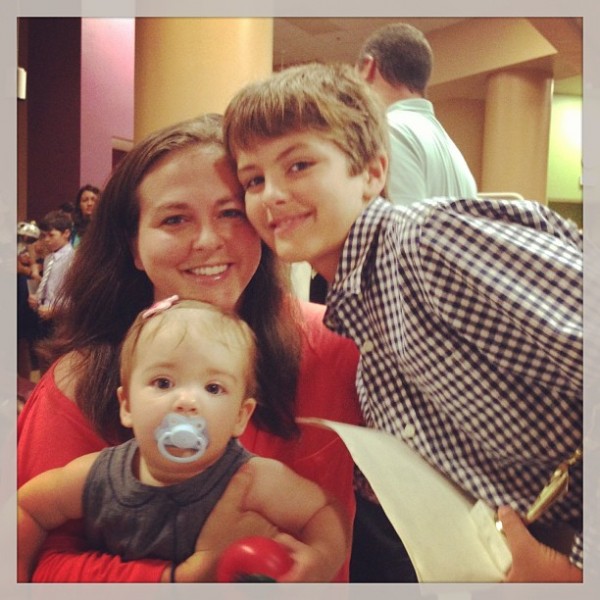 What I would like to tell my son's new fifth grade teacher:

Hi, I'm Allison. This is my son, my oldest child. He's in your class this year.

At the risk of sounding like "That Mom," I want to tell you there was a time -- a time not that long ago -- when I used to tear up at the thought of dropping my baby off at preschool for the first time. Back then, he was a somewhat pudgy toddler, not this gangly, long-limbed creature I present to you today. I used to push him in the swing at the playground, giving myself panic attacks thinking about a day when I would have to leave him at a school. I didn't think I could entrust the health and safety of my firstborn child to anyone, ever. Visions of Dustin Hoffman in Kramer vs. Kramer jogging his bleeding son to the emergency room after he fell from the jungle gym played on "repeat" in my hormone-addled brain.

Then I had another baby, and suddenly preschool didn't seem so ominous. It seemed, instead, like a magical place that might ensure my sanity. I did cry a little that first day of preschool drop-off, but I haven't cried since. This boy of mine loves school. He thrives in a classroom. I can't feel sad about his first days anymore.

But just so you know, you have big shoes to fill. I loved my fifth grade teacher, Mrs. Jean Dalton. I love her even more in retrospect, knowing she was the last teacher who was able to coddle me a little and let me be a child and not an emerging adult. Sixth grade -- middle school and lockers and puberty and everything that comes with it -- was a bit of a harsh wake-up call afterward, it's true. But thank goodness I had that one last year to be a child and to be treated like one. I am hoping my son gets the same opportunity, because adulthood is so very much longer than childhood, with much less time for pleasure reading and arts and crafts. And make no mistake, he is still a child. He still makes up games with his brothers on rainy afternoons, still kisses the rolls on his infant sister's neck, still changes the channel when Monster House is on TV because it scares him just a little, even though he won't admit it. I want him to be able to savor this last year of elementary school. Thank you for preparing him for middle school, but thank you just as much for recognizing that he still has some baby teeth to lose.

You'll have a part of my heart this year in your classroom, so be gentle with him. He loves school and still has the swagger and sheltered confidence of a child who hasn't yet encountered algebraic functions or Shakespeare's puns. He still thinks he owns the world and that he is invincible. While I know this can't last forever, I am holding on with both hands to the dwindling days left when he doesn't worry about how his hair looks or how a grade might taint his GPA.

Please encourage him, please challenge him, and please appreciate that he is actually a really good kid. He's wicked smart, too, but don't tell him so. Ask him to work for his learning and to put effort into his assignments. It will mean so much more to him and for him in the long run. Push him. See what he can do.

Be patient with me when I email you with my concerns. Some will be valid, most will be silly, but just know I am trying hard not to be a helicopter parent or invade your space. It's so hard these days to know what a "good" parent looks like – I'm told not to hover, but I should still be involved and engaged and advocate for my child. I'm not even sure if I am supposed to check his homework or not; some teachers want me to, others don't. I'm excited to help in the classroom, but I don't want you to think I'm trying to be all up in your business.

I trust my kid will be just fine, and I'm excited to see what you will do with him. I'm just trying to be a good parent, whatever that does actually mean, and I'm not crazy. I promise. Probably. I hope. When all is said and done, I just want my kid to be happy and to have a good year, and I know you want the same. I'm here to support you both.

What I actually said to my son's new fifth grade teacher at Meet the Teacher last week while other parents and kids swarmed around us and sweat glistened on my temples:

Hi, I'm Allison. This is my son. He's in your class this year. Um, where is his desk?