What Ever Happened to the School Locker? 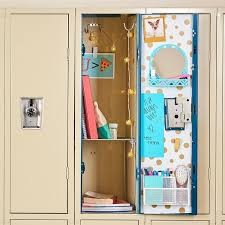 My high school senior trudged down the stairs carrying a backpack that, judging from its size and weight, made it appear she had signed up for a class in bricklaying. Or that she was anticipating a flood in the cafeteria that could only be staunched with sandbags.

“What’s in there?” I quickly asked, fearing she would soon topple over, thus ending the conversation.

“Just some books and other stuff,” came the reply.

“Will all of that fit in your locker?” I asked.

“Dad, nobody uses lockers anymore,” she said, her look confirming that I had already used up my “dumb dad question of the day.”

Sadly, she may be right.

The school locker, once a respite during passing periods, and a gathering spot before and after school bells, is rapidly becoming extinct. Parents of today’s students may fondly remember decorating lockers with cardboard signs, hand drawn in school colors, on football game days; now the 6 foot long by 1 foot wide by slightly over 1 foot deep (I made my daughter measure one) steel compartments forlornly line hallways, commanding zero usage or attention from passing students.

In their heyday, lockers were where school romances germinated and died, often in the same week. Lockers stored an emergency source of energy, mostly in the form of candy or other highly non-nutritional snacks.

The school bully welcomed me to junior high by shoving me against a locker. In high school, I remember slipping a note into the louvers of my crush’s locker, then discreetly watching from an empty classroom as she read it.

A poor test grade or report card couldn’t be changed by slamming a locker door, but it felt damn good, nonetheless. I struggle to remember my wedding anniversary date but can still instantly recall 27-14-25, my first locker combination.

“I loved my locker,” said Joe Sweeney, principal at Old Quarry Middle School in southwest suburban Chicago. “Not necessarily for what was in it, but for who was around it.”

Sweeney, who presides over a school containing 810 students and 1,039 lockers, said sixth graders, the youngest students at Old Quarry, enjoy having their own storage space due to the transition from elementary to middle school.

“They went from coat hooks to lockers,” he said.

But, by seventh grade, he admits the novelty has disappeared. So have the magnets, crepe paper, poster board and other accoutrements that typically adorn a locker’s interior and exterior.

Michaelsen can’t produce a definitive reason for the locker’s unpopularity but he has a few theories, among them, the rise of backpacks, allowing students to essentially carry their lockers with them at all times. “Block” schedules, consisting of four classes per day, mean fewer books to bring to school daily. Technology also has played a role; the introduction of Chromebooks, one for every student, means more textbooks on hard drives and in the cloud.

Attire has changed too. Or rather, attire has been eliminated.

As new schools are constructed in burgeoning communities, will there ever come a day when hallways are locker-free? Sweeney doubts it.

“I can’t see getting rid of them completely,” he said. “Kids are always going to need a place to put stuff of a more important nature.”

My daughter insists the five-minute passing periods at her school don’t allow enough time to visit her locker in between classes. I reminded her that my high school passing periods were also five minutes and I had ample time to stop at my locker multiple times per day.

“Couldn’t you just walk faster between periods?” I asked.

She didn’t answer, as she breezed out the door.

Middle School Will Look Different This Year
Why this new middle school dress code policy is a big win for girls
Yes, I'm the Mom Crying at Kindergarten Registration
advertisement

Middle School Will Look Different This Year
Why this new middle school dress code policy is a big win for girls
Yes, I'm the Mom Crying at Kindergarten Registration